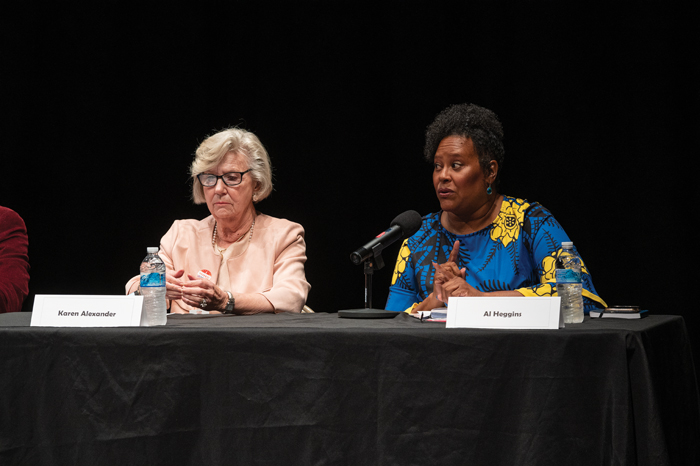 SALISBURY — While Mayor Karen Alexander has campaigned on her ability to obtain resources in her work with coalitions across the state, Mayor Pro Tem Al Heggins proposes aligning traditional values with forward-thinking vision.

Alexander and Heggins are challenging each other in the city’s first mayoral race. Traditionally, mayors have been appointed after receiving the most votes during municipal elections. Heggins made history in 2017 when she was the first Black woman elected to city council and made history again when appointed the city’s mayor the same year. Alexander was mayor from 2015-17 and reappointed mayor in 2019.

Alexander is the council liaison to the Rowan Tourism Board, Rowan-Salisbury Community Foundation and the Rowan Economic Development Commission. She’s president of the North Carolina League of Municipalities, founder and president of KKA Architecture, board member of Salisbury’s Community Development Corporation and delegate to the executive board of Centralina Council of Governments.

“In my line of work, I’m trained as a collaborator because I would never see one of my designs become reality and come off of that paper unless I collaborated with all these different people,” Alexander said. “I find it very exciting and exhilarating to see that same model working in our community.”

Alexander said her involvement broadens and deepens her understanding of what’s going on across the community, state and region so that she can cautiously and quickly respond.

“With that knowledge base, which is both deep and wide, you can look at what council’s goals are, and then in my role as mayor, as the spokesperson and the person who’s going to try to implement, then I have that in my back pocket,” Alexander said. “So when I’m going to advocate at the North Carolina legislature or in Washington with our elected officials there, I know what council’s goals are because we’ve created a strategic plan to focus on that year.”

Heggins’ background includes being a school teacher and college administrator, small business owner and human relations director for the city of High Point. She ran for the N.C. House of Representatives last year against Republican Rep. Harry Warren. She is also an Army veteran. She currently chairs North Carolina’s 13th District Congressional Democrats and is a member of the North Carolina League of Municipalities, the Poor People’s Campaign and the organizing committee of NC Local Progress.

Heggins said her professional background in addition to “knowing what it’s like to be on the ground” allows her to have a balanced approach when serving as mayor.

“I think that having that wonderful balance of knowing what it’s like to be on the ground and also having that 50,000-foot view, that those two things come together in a way that helps me have a really balanced approach to serving as mayor,” Heggins said. “I know what it’s like to be a person on the other end of not having access. So I don’t want anyone else to have to experience that. I don’t want anyone to have to fight, like I’ve had to fight in the past, to get information, to get access, to be heard.”

Both Alexander and Heggins agree that the selection of a new city manager is one of the top issues facing the city. The city manager is tasked with carrying out the council’s vision for the city while also managing daily operations and more than 400 city employees.

“That person will be key to successful management of our city,” Alexander said.

Heggins said the public’s input on the next city manager is important, and that the hire will need to apply an equity lens when carrying out the duties of the role. Applying an equity lens involves deliberate inclusion and a focus on equity in the overall process and outcome. Heggins said council members should carry our their roles with equity lenses, as well.

Heggins also advocates for participatory budgeting, which is an approach that involves more of the public’s input in how funds are allocated. She referenced the city’s remaining pot of nearly $6 million in American Rescue Plan funds, which she said could be used to fix roads and lights and transit barriers for neighborhoods most in need, for example.

Alexander said other major issues include economic and workforce development. She’s dedicated more than 20 years to the city’s Community Development Corporation as an architect, she said, which includes more $1 million of equity built in neighborhoods like Jersey City, West End and Park Avenue from housing revitalization and homeowners assistance programs.

Heggins said public safety is among the top priorities, and calls for “a deeper dive” into existing programs such as Cease Fire, which works to build relationships between neighbors and local law enforcement. She has cited the need for a Congress of Neighborhoods where elected representatives can collaboratively work to resolve problems and build accountability throughout the community. Additionally, she said the police departments needs additional positions like mediators and victims advocates.

Heggins also said council members work for the public and need to be good stewards of the public’s expectations. She referenced a recent comment made at a council meeting when a resident drew the comparison of how local law enforcement treated Commissioner Craig Pierce when he was arrested for driving while intoxicated this summer compared to Stephanie Bottom, a 68-year-old woman from Georgia who says officers used excessive force, drew their guns, pulled her out of the car by her hair and tore her rotator cuff after a 14-mile chase in 2019.

“I think as council members we have enough sense to know that each and every situation is going to be different that a police officer encounters,” Heggins said. “But I hope we have enough awareness and understanding — because I feel like I do — that when a police officer has a situation in which the dynamics are roughly the same, that we’re not going to see extreme differences in how those individuals that are being stopped, apprehended, arrested are treated.”

That requires implementing an equity lens throughout the department, Heggins said, and ensuring officers are trained in de-escalation strategies and understand racial, social and hidden biases that may impact policing.

Earlier this year during a city housing retreat, the city cited a shortage of more than 1,700 housing units for those earning up to 50% of the area median income. Alexander said public-private partnerships are the way to address the issue of affordable housing, again citing programs like Salisbury CDC and resources like Community Development Block Grants from the federal government. That approach was taken for past successful projects like Brenner Crossing, she said, which includes a blend of market rate and income-restricted units.

Among the projects in the pipeline at this time are Shay Crossing on Earnhardt Road, Ashton Manor on Sunset Drive, Brightleaf Terrace and Britton Village on Statesville Boulevard, Salisbury Oaks Apartments between Jake Alexander Boulevard West and South Main Street near Rosemont Street and Tenby Crossing Apartments near Brenner Avenue and Milford Hills Road. All of those projects are blends of single- and multi-family market rate and affordable housing units.

“It’s not an easy magic wand,” Alexander said. “We don’t have the budget to provide more than what we’re given in grants,” Alexander said. “That’s why I spend so much time looking for those opportunities and those grants because that can help us leverage what we would normally either not be able to do or by matching something that we do have in the budget for housing.”

Heggins said the city needs to set an example to businesses and employers that there’s an expectation for wages to be no less than $15 an hour, which still sometimes isn’t enough for families. It’s another reason she continues to advocate for raising pay for firefighters and other city employees, she added. Additionally, the city must ensure downtown rent rates don’t “price out” residents and business owners, especially those who may need to be close to their jobs for transportation reasons.

Alexander also said businesses that come to the city should be paying employees a livable wage.

Heggins has also suggested allowing space downtown for entrepreneurs who don’t have a brick-and-mortar space in the form of pop-ups.

Alexander said Bell Tower Green Park will be a catalyst for community and economic development, and the eventual redevelopment of Empire Hotel will continue to attract more businesses and residents.

Early voting spans until Oct. 30 at the Rowan County Board of Elections office, located at 1935 Jake Alexander Boulevard. Election Day is Nov. 2, and voters will cast ballots at their municipal precincts.