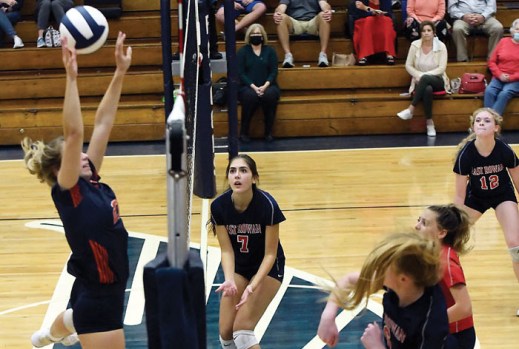 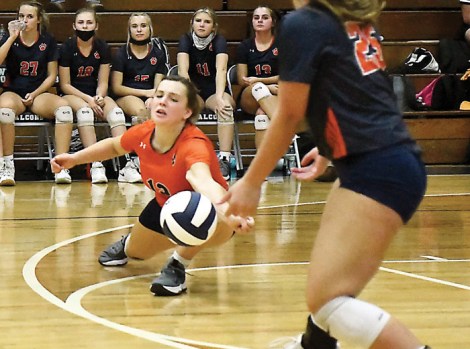 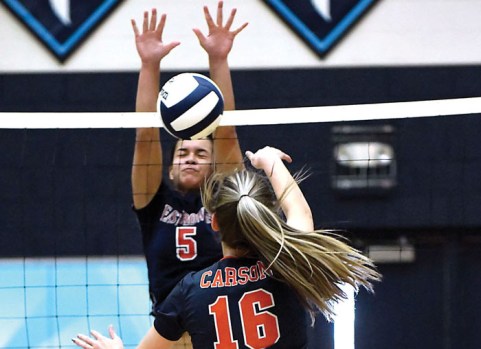 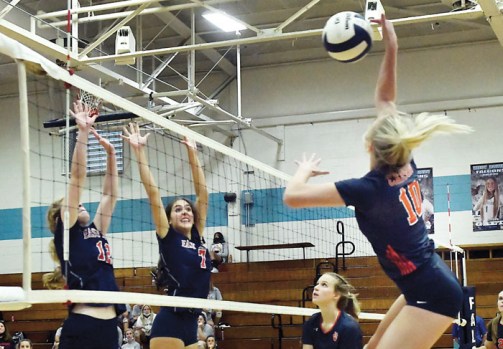 MOUNT ULLA — Volleyball playoff brackets will be released on Thursday.

East Rowan is projected to be on the wrong side of the 3A West bubble. If the Mustangs don’t make it, it will be because of three draining losses to Carson.

The third one came Monday in a South Piedmont Tournament quarterfinal. Fourth-seeded Carson, which had edged the fifth-seeded Mustangs 3-1 in China Grove and 3-2 in Granite Quarry won 25-23, 25-20, 20-25 and 25-23 in neutral Mount Ulla.

“East Rowan has got some ups,” said Gianna Patella, a junior middle hitter who leads Carson in kills and blocks and is third in digs. “But whenever it came down to the end, we wanted it more. In those tight moments, we got excited. The adrenaline got us jumping higher.”

Carson survived the first set on an East hitting error and the fourth one on a missed serve by the Mustangs. The Cougars appeared to be hanging from a ledge in both of those sets, but East couldn’t provide that final shove.

“In my opinion, there are four teams in our league that are very evenly matched, and that’s us, East, South Rowan and Lake Norman Charter,” Carson head coach Kelan Rogers said. “It’s always going to come down to a handful of key points. It did again today.”

East, Carson, South and runner-up Lake Norman Charter chased league champion West Rowan to the finish line in the regular season. While the SPC gets just two automatic playoff berths, South Rowan and Carson — the neighbors split with each other and tied for third — are certain to be in the playoff bracket as at-large teams.

“Well, we project to be in there,” Rogers said. “But we don’t like to be in the position of waiting and hoping.”

Carson (12-13) could claim an automatic bid by winning this tournament, but that would be a tall order. That would require upsetting West Rowan in a Tuesday semifinal and handling either Lake Norman Charter or South Rowan in Wednesday’s championship match.

East (10-13) has potentially devastating hitters in Anasty Faavesi (15 kills) and Leah Hinceman (17 kills and 23 digs). They had both had hot streaks Monday, but the Mustangs couldn’t get both of them rolling at the same time. A spree by Faavesi carried the Mustangs to victory in the third set, but Carson found a way to win the other three.

“East has big hitters, but we have a very strong back row,” said Carson libero Allie Burns. “We read the ball well and communicate well and we know if we can just get the ball to (setter) Elly Davis, she’s going to make a great set. Before every match we talk about playing as a team, playing as a family, and that’s what it took today. That’s why we were able to win those close sets.”

Outside hitter Laney Reilly produced two key kills as the Cougars held off East in the first set.

Carson carried momentum to the second set and led by 7-0 and 11-3 before the Mustangs got tired of being pushed around. East rallied furiously and caught up at 16-all, but Patella made three key plays at the net when that set could have gone either way.

It might have been disastrous for Carson to lose a set it had led 7-0, but Patella didn’t let it happen.

“That’s kind of the way our whole season has gone,” Rogers said. “We do good things, but then we do bad things. We’ll have stretches of six or seven good points, and then we’ll give away six or seven with unforced errors. You look at our stats for the season and there’s just not a big enough difference between kills and errors.”

East got down 5-1 at the outset of the third set but avoided digging a deep hole.

A reversed call favored the Cougars, and while it cost East a point, it served to rile up the Mustangs. Faavesi, pounding from the left side, hammered blasts for East’s 21st, 23rd and 25th points. Carson had no answer for her. The Mustangs took the set.

Carson shook it off, led 5-0 in the fourth set, and then watched the Mustangs roar back one more time. East caught up at 12-all on a Hinceman kill.

East edged in front 17-15, and some of the day’s longest points took place, as both team’s defenders went to the floor to dig rockets.

East’s last lead was 21-20. At 21-all, Carson freshman Kaylee Thonen came through with a huge point to put the Cougars ahead to stay. Reilly smashed the next two.

With Carson clinging to a 24-23 edge, East’s serve sailed out, and the Cougars had frustrated the Mustangs again.

Cameron Ostle and Peyton Whicker had three blocks each for the Mustangs. Libero Riley Hill had 28 digs. Setter Carrie Jo Lytton had 36 assists and 26 digs.

Carson still did enough to win.

“This was the kind of tight match we were losing early in the season,” Burns said. “We’ve learned to push through the tough stretches and we’ve learned to finish strong.”