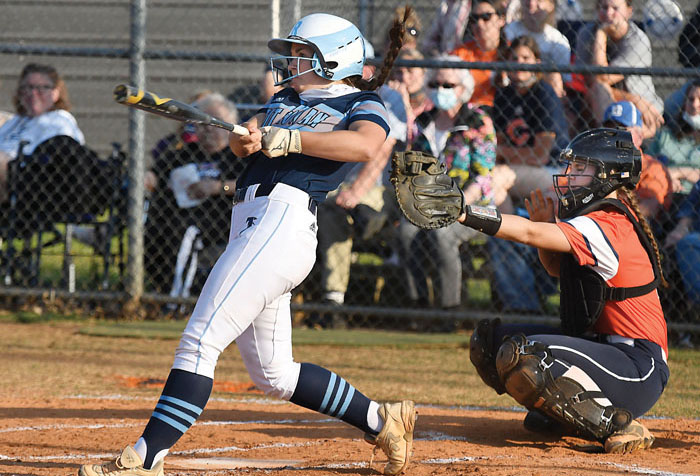 West Rowan’s Brooke Kennerly is committed to continue her softball career at Appalachian State. File photo by Wayne Hinshaw, for the Salisbury Post

MOUNT ULLA — North Buncombe senior pitcher Karlyn Pickens is a University of Tennessee commit who faced 253 batters in the spring of 2021.

She struck out 207 of those 253 batters. She allowed 12 hits all season — less than one per game — and just one of those hits went for extra bases.

That extra-base hit was a home run launched by West Rowan catcher Brooke Kennerly in a third-round 3A playoff game that North Buncombe won 3-2.

With two outs and no one on base and the Falcons trailing 2-0 in the fourth inning, West head coach Jimmy Greene let Kennerly swing away on a 3-and-0 pitch. She hammered it, sending a line drive over the right-field fence.

That’s a pretty good indicator that Kennerly, who went 2-for-2, plus a walk, against Pickens, can be successful against anyone in the state at the high school level.

“She got the green light on 3-and- 0 and that home run is not something I’ll ever forget,” Greene said. “It sounded like a shotgun going off. Brooke has so much power in her swing. Even Brooke doesn’t realize yet how much power she’s got.”

One of the people who does realize how much power Kennerly possesses is Appalachian State assistant coach Shane Showalter, who works with the Mountaineers’ hitters. He had some conversations with Greene long before Kennerly ever visited Boone.

Kennerly is a big fan of Boone and recently gave the Mountaineers an early commitment.

“I’ve seen some strange things in this recruiting game,” Greene said. “But Brooke is a player, and Appalachian is going to be a great spot for her.”

Down the road, Kennerly would like to become a physical therapist or sports journalist, but the slugging junior still has two high school softball seasons in front of her.

There are going to be a lot of home runs before she graduates.

“Back in eighth grade, I started thinking about playing college softball and I made up a list of Appalachian, UNC Wilmington and Lenoir-Rhyne, as the places I would like to go,” Kennerly said. “You can’t communicate with schools until the first of September of your junior year, so you spend a lot of time wondering if they have any interest or not. So it was exciting to find out how much interest Appalachian had. I grew up playing in a family atmosphere at West, and that was the main thing I was looking for in a softball program. Appalachian had that family feel to it.”

Kennerly started swinging when she was 3 or 4, playing with the boys in her early days in Tee Ball and Coach Pitch.

She became reasonably famous locally in 2016 and 2017 playing softball for Rowan Little League squads on big stages. Both of those teams finished runner-up to Texas teams in the World Series.

Kennerly also has played in a lot of competitive travel ball games for the Rowan Lady Razorbacks and the NC Bandits.

“I had great coaches who taught me a lot — Steve Yang, Eric Dowling, Rob Hales, and Gary Simpson with the Bandits,” Kennerly said. “I’m still close to all of them.”

She plays one of the more demanding defensive positions, maybe the most demanding, as well as swinging a heavy bat. She benefited from defensive lessons from Ally Blake Davis, the former UNC catcher.

“She’s worked hard on her skills behind the plate and now she’s a rock for us there,” Greene said. “She’s just really strong and really athletic. She’s one of the best athletes in the school.”

West was limited to three games Kennerly’s freshman year due to the pandemic.

The Falcons were 12-3 her sophomore year, but splits with East Rowan and Carson left the Falcons in second place behind the Cougars in the conference.

West didn’t really start rolling until the end of April. That’s when Kennerly warmed up. She had seven hits and eight RBIs in West’s five postseason games.

“She missed out on a lot of accolades as a sophomore because she did most of her damage in the postseason, once we got into the conference tournament and the playoffs,” Greene said. “She came through in big games because she’s such a competitor. You don’t have to try to figure out how to motivate Brooke. She motivates herself. She really wants to win, and winning has always been more important to her than anything she might do individually.”

Kennerly homered in West’s victory against Carson in the conference tournament championship game.

Then she homered in all three playoff games. That streak of four consecutive games with home runs gave her six for the season.

“I was just grateful we were able to have half a season after what happened my freshman year,” Kennerly said. “I do a lot of hitting drills, and it was just starting to come together for me at the end of last season. Some of my power is natural, but those drills with our coaches made a difference.”

Kennerly’s hobby is volleyball. She’s the libero and the leader in digs for the Falcons, who won the South Piedmont Conference this fall.

“I go way back with some of the teammates I’ve had in volleyball as well as softball,” Kennerly said. “Volleyball has always been that place I can go and relax and have fun.”

While she’s very good in volleyball, there’s not much pressure.

Expectations are higher for her in softball.

In softball, she’ll be counted on this spring as one of the big bats in the middle of the lineup for another strong West team.

“She could be awesome,” Greene said. ” She’s learning she doesn’t have to try to murder the ball. She’s just got to hit it, and it’s going to go. The ball explodes off her bat.”