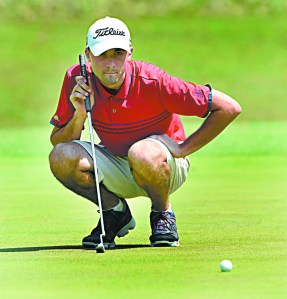 Nick Lyerly. Photo by Wayne Hinshaw, for the Salisbury Post.

The key for Lyerly was a 7-under 65 in the first round. He made eight birdies and one bogey. He shot 31 on the front nine.

Lyerly followed with a 1-under 71 (four birdies, three bogeys) and a 2-under 70 (four birdies, two bogeys) to win the tournament. He won by two strokes over East Carolina’s AJ Beechler.

Lyerly led the UNCG Spartans to second place in the 16-team field. The Spartans finished five shots back of host N.C. State.

Next for UNCG is a tournament at Grandover this weekend.