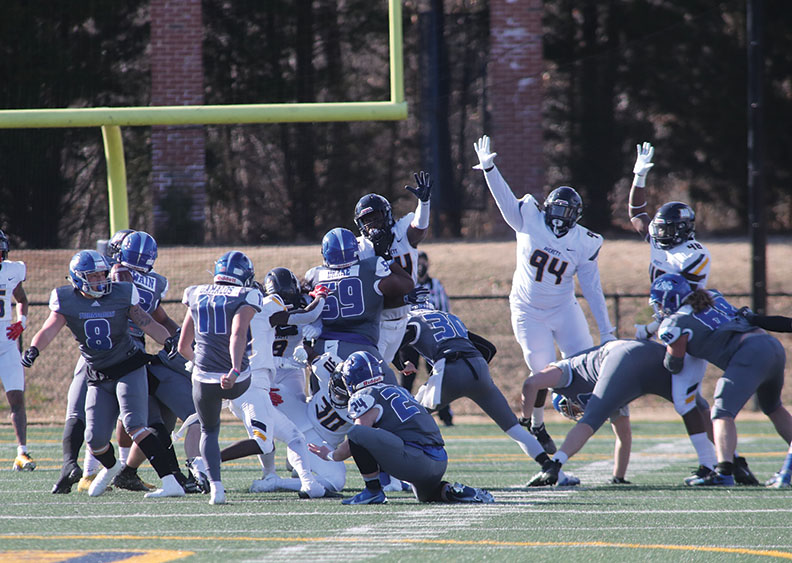 Submitted photo JaVon Lofton, No. 94, makes an attempt at a block during a recent game.

DANVILLE, Va. — Back in his days as a West Rowan Falcon, JaVon Lofton understood line play wasn’t about height and weight or bench presses.

The battles in the trenches are won mostly with technique and leverage. Lofton is a technician, a craftsman, and that’s why he’s a starter for his college team — the Averett University Cougars.

Packing 295 pounds on a 5-foot-11 frame, Lofton weighs 45 pounds more as a fifth-year senior in college than he did as a senior in high school. 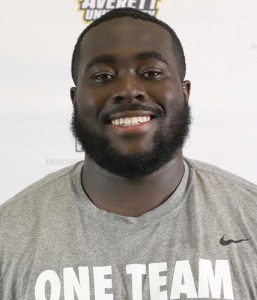 He’s also switched sides of the ball. A rugged left guard for the Falcons, who protected Payne Stolsworth and opened holes for Jovon Quarles, he’s now a defensive tackle.

“It wasn’t as hard a transition as it sounds like,” Lofton said. “I took a lot of skills from offense over to defense. There are advantages to having spent so much time on the offensive line. I understand the schemes. I can see the pulls.”

Most people don’t realize how big, how fast and how good college football players are, even at the Division III level (no athletic scholarships) where Averett competes.

Lots of high school athletes with more accolades, more press clippings and more fanfare than Lofton headed off for college ball, but never made it into a game, much less developed into a key player.

Lofton wasn’t an overnight sensation. He paid some dues. He spent worried nights in Danville, Virginia. That were a few times he wanted to make that two-hour trip from Averett back home and never return.

His freshman season in 2017 he played in only six games and put only three tackles on the stat sheet.

“I was a little bit of a hothead then,” Lofton said. “It took some time to get it right.”

“Freshman year here at Averett, that was sort of rough,” Lofton said. “I was homesick and wasn’t doing so well in school, but then I got a lot of help. The coaches let me know they had brought me here for a reason, but if I was going to play for them I was going to have to do the job in the classroom. So I became a much better student in college than I ever was in high school. The other thing was my teammates. You become brothers with those guys and you don’t ever want to let them down. That’s why I ball out every time I’m on the field.”

Averett was rolling, but COVID wiped out the fall season in 2020.

“COVID was tough,” Lofton said. “That day when they send everyone home was hard and it was boring just sitting around. We didn’t have a fall football season and then we didn’t know if we’d get to play any football in the spring. We went 1-3 in the spring, but we got back out there.”

Averett went 16 months between football games — November 2019 to March 2021. But things are mostly back to normal this fall. Averett is 3-2. The two losses could have gone either way.

Averett’s base defense is a 4-2-5. Lofton’s job as a defensive tackle is to control the run first, but he also has the task of pressuring the quarterback on passing downs. Most of Averett’s opponents like to throw it around.

Lofton got his first starts for Averett as a sophomore in the fall of 2018.

As a junior, he enjoyed a breakout season with 38 tackles. He produced five tackles for loss, three sacks and three quarterback hurries.

He had two TFLs among his team-high 26 tackles in 2021’s four-game spring season.

With the COVID redshirt, Lofton is now making the most of a fifth season.

“I want to be all-conference and I’d like to be an All-American,” Lofton said.

Lofton’s 30 tackles currently rank fourth on the team and reflect an exceptional total for a defensive lineman.

Besides racking up tackles, Lofton has made impact plays. He had a forced fumble in a win against Maryville and he’s been credited with two sacks.

Last weekend, Lofton made an epic road trip when Averett traveled all the way to Montgomery, Alabama, to take on the Huntingdon Hawks.

Just one more memory in what has been a rewarding college experience for the sports management major.

“I’ll be graduating in the spring,” Lofton said. “My dad will be the most excited person there. He says he’ll do a backflip.”