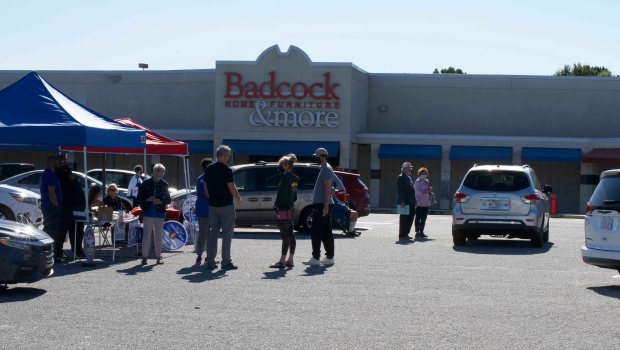 Carl Blankenship/Salisbury Post - Candidates and supporters outside the Rowan County Board of Elections Office at Park Plaza on Sunday. 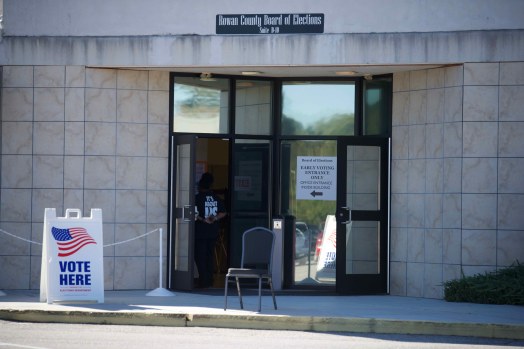 Carl Blankenship/Salisbury Post - Turnout was low with the exception of Friday, when Livingstone College bused students to the polls.

SALISBURY — Votes continued to slowly roll in this weekend at the Rowan County Board of Elections.

The site is the only place to vote early in 2021 municipal elections. At any one time this weekend, there were more candidates and poll workers at the site than people voting. It’s not unusual for a municipal election year. Elections with statewide and federal offices on the ballot always draw more people to the polls, including last year’s presidential election that drove historic turnout numbers.

Rowan County Elections Director Brenda McCubbins said the numbers so far have been similar to municipal elections in 2019 or down slightly.

As of Sunday, 510 people, or 1.26% of eligible registered voters, had cast their ballots since voting began on Thursday. Saturday was the slowest day, with only 61 votes cast and about nine votes per hour. Friday was significantly higher than the other days, with 201 votes cast.

McCubbins said Friday saw so many ballots because that was when Livingstone College shuttled students to vote. The college has a tradition of transporting students from campus to the polls to vote together.

While the pace of voting isn’t unusual, this is the first year Rowan County has held voting on Sunday during a municipal election.

There were 107 ballots cast during Sunday’s four hours of voting.

Rebecca Hyde, a voter who went to the polls on Sunday, said it is important to her to vote every year she can.

The parking area outside the polling site was full of candidates looking to speak to voters. Salisbury City Council candidates and the mayor’s race was well-represented. Mayor Pro Tem Al Heggins and incumbent Mayor Karen Alexander, both competing the city’s first separate mayoral race, were at the polls.

“I just really want people to participate in the process of voting,” Heggins said.

Alexander said some people will wait to vote until the end of the period to see all information produced on all the candidates.

“They haven’t really had a chance to digest,” Alexander said.

City Council candidate Jessica Cloward, a newcomer to Salisbury politics, said she feels confident. Even if people wait until later in the early voting period, Cloward said she hopes there will be a good turnout.

“This is really the heart of the city,” Cloward said. “We need to vote.”

Anthony Smith, also making his first bid for City Council, said he feels confident as well, noting people know him from his work as a pastor and activist.

“It’s just getting my platform out there,” Smith said, adding his campaign is trying to grow the electorate.

Rowan County Democratic Party Chair Geoffrey Hoy was out at the site to show support for candidates the party has endorsed.

Hoy said the party has been pushing for Sunday voting for years and is pleased the dates have been expanded.

Nalini Joseph, another City Council candidate, said there has been good energy at the polls.

“Some have their mind made up for two or three candidates and I make sure they know a little bit about me,” Joseph said.