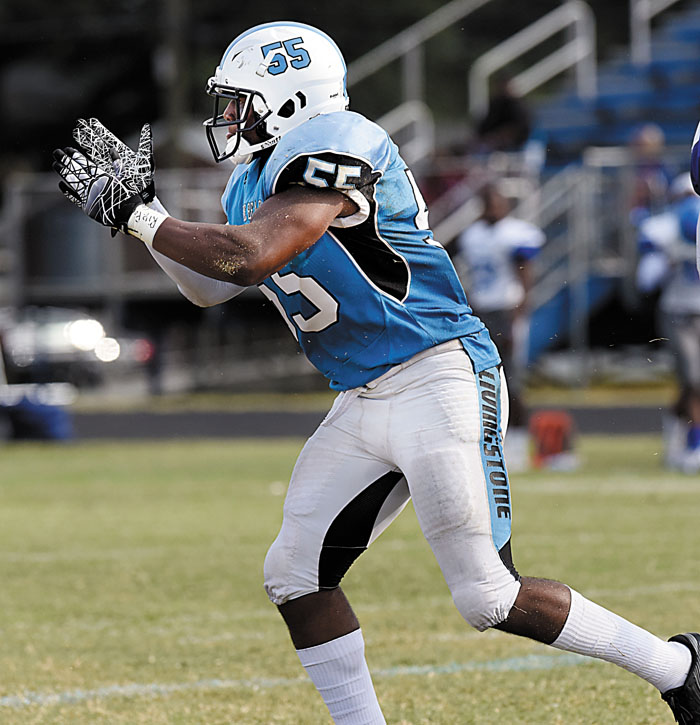 Malcolm Mayes intercepted a pass in Shaw territory that paved the way for the game's first score. File photo by Wayne Hinshaw, for the Salisbury Post

SALISBURY — It got ugly at Alumni Stadium on Saturday.

In the final game before a planned $2.8 million renovation, Livingstone’s football team endured a performance most observers would rather forget. A 20-9 CIAA loss to visiting Shaw University was sprinkled with missed chances and marred by a pair of late-game melees that sent two players to the sidelines with ejections.

“It’s football. Guys get chippy,” first-year coach Sean Gilbert said after the Blue Bears (1-6 overall) fell to 1-3 in conference play. “Watching the game and how guys were competing, you’re going to see some of that. We still had plenty of opportunities, but time worked against us.”

“First of all, I want to apologize for how my guys played today,” he said. “My character is not like that and I’m very embarrassed how we ended that game. Good teams can’t do those things, but we won the game and we’ll get those things fixed.”

“You’ve got to capitalize when you get inside the red zone,” said senior running back Tecorey Tutson. “We just didn’t.”

An interception by LC linebacker Malcolm Mayes in Shaw territory paved the way for the game’s first score — a 40-yard field goal by Jose Gonzalez with 2:05 remaining in the opening quarter. The lead stood until midway through the second, when SU quarterback Torrin Campbell floated a screen pass to sophomore running back Sidney Gibbs in the left flat. Gibbs rumbled down the left sideline and leapfrogged a Livingstone defender at the goal line, sealing a 40-yard touchdown play that gave the visitors a 7-3 advantage.

“The defensive effort was actually great today,” DE Kendall Green said after forcing and recovering a second-quarter fumble. “But everybody who knows football knows it takes an offense a lot longer to get going than a defense. It means we’re still a work in progress.”

Gilbert agreed. “It’s always disappointing when you have an opportunity to make a play and you come up short,” he said. “But we’ll make these plays coming down the pike. We’ll grow.”

The Blue Bears squandered a golden chance as the first half ticked to a close. With quarterback Miles Hayes under center, they marched from their own 30-yard line to the SU three, melting more than seven minutes off the clock. But on fourth-and-goal — following a sequence of three consecutive timeouts — Hayes lobbed a sure TD pass to Tutson unguarded in the end zone. But a 15-play, 67-yard drive stalled when the pass fell incomplete.

“I took my eyes off the ball, trying to get upfield real quick,” Tutson explained. “We were trying for the win, going for the kill shot. We’re gonna work on it, learn from our mistakes and keep it moving.”

Gilbert said he never considered sending Gonzalez out for what would have been a short-range, into-the-wind field goal attempt. “It was a difficult one because of the way the wind was blowing,” he said. “It was shifting, dying and then coming back hard. But we wanted the points. We were going to be aggressive.”

Only 5:48 remained when the guests drove 45 yards in 11 plays for a game-clinching TD. Brandon took a handoff and skated seven yards around left end to make it 20-3. Livingstone closed the scoring in the game’s final minute — after the on-field altercations — when Hayes (104 yards passing, 61 rushing) raced three yards into the end zone.

“We won because of special teams,” Jones concluded. “You’ve got to be special on special teams. If we don’t block those punts, if we don’t make those plays, it’s probably a dogfight. A closer game, anyway.”

In spite of the disappointment, Gilbert believes LC is still upbeat and a legitimate contender to capture a division title. “The locker room is not down,” he insisted. “This is no time to hang their hats up.”

NOTES: Shaw’s Michael Chesney and Livingstone’s Tyler Ashwood were the ejected players. Both will likely sit out next week. … The game was halted for about five minutes in the fourth period when the press box lost electricty, freezing the scoreboard clock. … LC’s Rodney Brooks had a third-quarter interception. Safety Walter Watkins led the Blue Bears with six tackles. … Livingstone rushed for 114 yards. Its defense yielded 152. … The Alumni Stadium renovation project is scheduled to begin Nov. 8 and be completed by next spring. It will include a new Columbia blue turf playing field, a new track, a 19 x 34-foot video scoreboard and a re-wired press box. … Livingstone visits Winston-Salem State next Saturday.