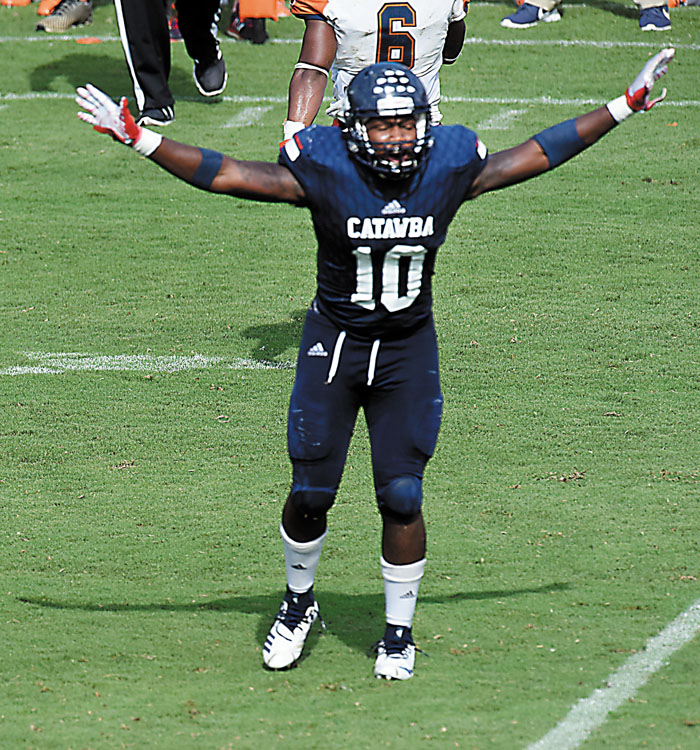 Catawba's Jeremiah Ferguson had 12 tackles to lead the defense. File photo by Wayne Hinshaw, for the Salisbury Post

NEWBERRY, S.C. — Catawba’s first road trip of the season did not go well.

The Indians got a touchdown on their first offensive possession on Saturday night, but didn’t dent the scoreboard again in a 14-7 loss to Newberry at Setzler Field.

It was the first setback for the Indians (4-1, 1-1), who fell to the Wolves for the fourth straight time. Newberry (5-2, 4-1) resides in second place in the South Atlantic Conference.

Newberry’s defense was outstanding. After the Indians maneuvered 80 yards the first time they had the ball, they managed just 85 yards of offense the rest of the evening. Catawba picked up 14 first downs, but four of those came on penalty flags.

Things started well for Catawba. Newberry took the opening kickoff and marched, but the Indians got the stop in the red zone, with Landen Johnson making a big third-down tackle, and a personal foul shoved Newberry out of field-goal range.

Then Catawba put together its 80-yard scoring drive. With the Indians facing third-and-4 at the Newberry 20, Ken Avent’s touchdown pass to Kobe Christian finished the journey. Clayton Crile kicked the PAT.

Newberry drove 80 yards early in the second quarter for the equalizing score, QB Dre Harris, the reigning SAC Player of the Week, produced completions of 37 and 22 yards to advance the ball to the Catawba 15. Harris scored on a run from there, and it was 7-all.

Newberry controlled the rest of the half, but the Indians were able to get to the locker room, still tied 7-all, after Izaiah Taylor blocked a Newberry field goal attempt.

In the third quarter, things slowly, agonizingly turned Newberry’s way, as the Wolves moved the ball better and kept it longer.

A Catawba three-and-out in the third quarter set the stage for a line-drive punt by Crile that Brentley Allen was able to return 19 yards to the Catawba 33.

Newberry used the short field to pound it home from there, with rugged running back Mario Anderson (129 rushing yards on 28 carries) doing most of the heavy lifting. Anderson rammed it down to the Catawba 7.  Harris took it in from there for the decisive touchdown on the first play of the fourth quarter.

Kujuan Pryor’s 41-yard return of the enusing kickoff, all the way to the Newberry 44, gave the Indians a golden opportunity to push for a tying touchdown, but Newberry’s defense won another battle. Catawba picked up one first down ( for a late hit on Avent out of bounds), but Catawba could only push the ball to the Newberry 27. Crile missed on a 44-yard field with 11:16 remaining, and the Indians never got another serious scoring chance.

Catawba’s last-ditch effort came after it got the ball back at its 6-yard line with two minutes left. Avent scrambled for a first down at the 20. Then the Indians got another first down at the Catawba 36 on a pass interference call. But Avent was intercepted by Anthony Blue on the next snap. That was Catawba’s first turnover of the day, but it was over.

Catawba’s defense did a lot of bending, as Newberry piled up 421 yards of balanced offense with 248 yards on the ground. Harris accounted for 173 passing yards and 75 rushing yards.

Catawba’s defense, led by Jeremiah Ferguson’s 12 tackles, kept the Indians in the game, but it wasn’t able to make any momentum-swinging plays. The Wolves didn’t turn it over and Catawba didn’t record any sacks.

Holding high-powered Newberry to 14 points should have led to a win, but Catawba had a shaky offensive day. Avent’s 13 pass completions produced a meager 85 yards. Catawba came into the game averaging better than 230 rushing yards per game, but added just 80 on 28 carries against the Wolves.

Next for Catawba is a road trip to Mars Hill against another SAC contender.