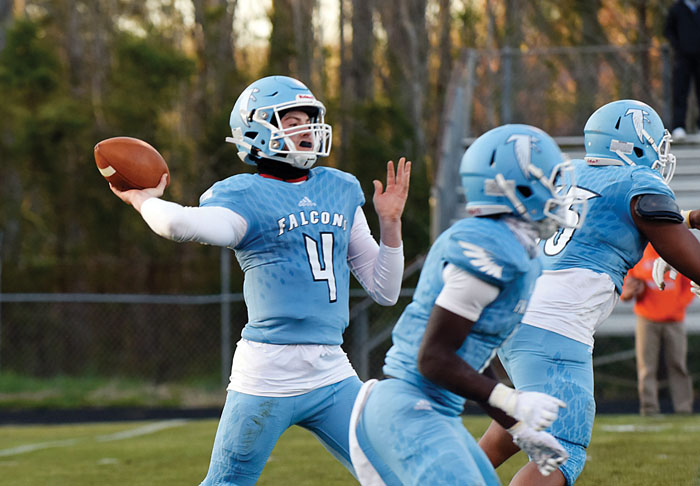 West QB Noah Loeblein broke a school single-game record with 371 passing yards against Central Cabarrus and broke the school and county records in that game with six touchdown passes.

MOUNT ULLA — West Rowan quarterback Noah Loeblein’s one-word description of Senior Night was “cool,” but he could have opted for “historic.”

Loeblein threw six touchdown passes in a 57-13 South Piedmont Conference romp against Central Cabarrus to break school and county records. There had been nine five-TD efforts by Rowan QBs, including one by Loeblein last spring.

Loeblein found four different receivers for touchdowns. His 15 completions on 22 attempts accounted for a whopping 371 passing yards to set another single-game mark for the West program. North Rowan’s Mario Sturdivant threw for 414 yards against East Rowan in 1997, a county mark that has stood for 24 seasons.

West (5-2, 4-0) also got 207 rushing yards and two TDs from Akin Robinson, but started sluggishly and was locked in a struggle with the underdog Vikings for a half.

“The open week hurt us some,” Loeblein said. “We felt like we should be able to do whatever we wanted to do against Central, but we weren’t clicking early in the game.”

“When we go, we go,” West head coach Louis Kraft added. “But we were beating ourselves for a while there with penalties, with bad snaps, with not catching snaps. We were behind the chains a lot.”

All that changed in the second half. There was an avalanche of West touchdowns and interceptions. The Falcons picked off five passes, four of them after halftime.

Loeblein’s first touchdown pass went to H-back Ben Sweet for  6-0 lead, but Central Cabarrus (2-5, 2-2) answered with a field goal and some tenacious defense.

Braxtyn Barger made the first interception for West. That led to a Loeblein-to-Peter Williams-Simpson 34-yard touchdown pass for a 13-3 lead with 3:31 left in the first half.

“A little receiver screen, and he made some guys miss and took it all the way,” Kraft said. “That play gave everyone an idea of how good he really is.”

Central struck back quickly for Kaden Kline’s 67-yard touchdown pass to Adriel Miller. When the Vikings tacked on a 2-point conversion, the Falcons’ lead was down to 13-11.

Unfortunately for the visitors, they left enough time on the clock for the Falcons to answer before halftime. Sweet broke open over the middle for a 17-yard TD with 21 seconds left, his second and Loeblein’s third, and the Falcons went to the break with a 19-11 edge and lots of momentum.

“I didn’t think we played with much energy or excitement in the first half, and I challenged our guys at halftime,” Kraft said. “They responded. We played the way we’re capable of playing in the second half.”

West got the ball first to start the second half. On third-and-11, Loeblein connected with Paxton Greene for a 60-yard gain from the West 20 to the Central 20.

“That was one of the bigger plays,” Loeblein said. “I got the ball to Paxton and he made a little move and turned it into a big gain. That’s when we started clicking offensively and started doing the things we can do.”

West’s defense put Central in a third-and-22 predicament, got after the quarterback, and Nigel McManus made an interception. That led to Loeblein’s flip to Adrian Stockton for a 40-yard score and a 31-11 lead.

Lots of Vikings play both ways, and after another stop by West, Robinson sped past tiring tacklers on an 80-yard jaunt and a 37-11 advantage.

Williams-Simpson caught a 27-yard pass to set up a TD run by Cayleb Brawley for 44-11, as the Falcons scored their fourth TD of a powerful third quarter.

McManus added his second interception before it was over. Matthew Gabriel and Lee Vaughters also picked off passes.

Central’s only points of the second half came when the Vikings were awarded a safety when Loeblein was called for intentional grounding in the end zone.

Loeblein hit Garrett Fesperman with his last two touchdown passes. The one with 8:21 left made it 51-13 and the next one triggered a running clock.

West amassed more than 650 yards of offense. Fesperman had 102 yards on six catches, while Wiliams-Simpson had 122 on five.

“No one could have been expecting it after the way we started out, but it turned into an amazing night,” Loeblein said.

Concord flattened Northwest Cabarrus 48-14, so the Spiders and Falcons, both unbeaten in the league, will be tangling for the SPC championship next week.

“It’s going to be a dogfight,” Loeblein said.

“He’s a special back, and he had a very good game,” North coach Nygel Pearson said.

North got a turnover on the opening kickoff and scored just 22 seconds into the game. After a long run by Jeremiah Alford put North in the red zone, the Cavaliers (5-2, 3-1) scored when Alford made a short flip to Amari McArthur on a jet sweep.

Morrow got his first TD following a blocked punt by Zion Milton. North tacked on its second 2-point conversion for a 16-0 lead just three minutes into the contest.

“One of the things we’ve talked about is getting starter faster and we did better at that tonight,” Pearson said. “We’ve also been trying to block a punt, and we got our first one.”

Morrow’s second TD run of the first quarter made it 22-0. He got his third one early in the second quarter for a 28-0 advantage.

West Davidson (1-6, 1-3), which picked up its first win last week against Lexington, got on the scoreboard with a rushing TD with 5:17 left in the first half and trailed 28-7.

After Morrow broke his 51-yard score early in the third quarter, the Cavaliers added another 2-point conversion for a 50-7 lead, triggering a running clock.

The Green Dragons got their second touchdown through the air in the final seconds of the third quarter. Neither team scored in the fourth.

“We let them drive it a few times, and we’re still working on some things,” Pearson said. “We’re still finding our way when it comes to getting stops.”

North takes on Lexington next week before it heads to Salisbury for a regular-season finale.

LEXINGTON — Salisbury crushed Lexington 65-0, the sixth shutout in eight games for the Hornets.

Salisbury has scored 458 points, while allowing 27.

The Hornets (8-0, 5-0) led 29-0 after a quarter and were up 49-0 at halftime. The second half at Philpott Memorial Stadium was quickly played with a running clock.

JyMikaah Wells started the scoring for the Hornets on a 10-yard run.

Wells got his second TD on a short run, and Geter threw a 41-yard touchdown pass to Deuce Walker to make it 29-0.

Salisbury’s defense got the next two touchdowns, with Jayden Gibson scoring on a pick-six and Nick Tillman recovering a Lexington fumble in the end zone.

In the third quarter, Wells broke one for 65 yards for his third TD, and Will Webb scored a 2-point conversion.

Salisbury’s defense registered its third score of the night, a safety, when Damian Brandon and Tyree Brown combined on a hit in the end zone.

When Lexington (0-6, 0-4) kicked off after the safety, Savion Freeman returned it for a touchdown on the final play of the game.

Salisbury isn’t scheduled to play next week and will look to win an outright 1A/2A Central Carolina Conference title when it hosts North Rowan on Oct. 29.

Lexington will play at North Rowan next week.

MOCKSVILLE —  Davie fell behind 21-0 and lost 35-14 to West Forsyth in a Central Piedmont Conference matchup.

The War Eagles (5-3, 2-3) were held to one offensive touchdown. That TD came on an Alex Summers to Zymere Hudson pass in the third quarter and cut Davie’s deficit to 21-7.

Davie was stopped after moving the ball to the West Forsyth 1, but the Titans fumbled at their 8, and Peyton Helton had a scoop-and-score TD for Davie with 9:18 remaining to make it 21-14.

Davie had chances to stop the Titans (4-3, 2-2) and get all the way back, but West Forsyth’s offense went 80 yards for a touchdown and the Titans added a pick-six.

Tate Carney had 96 rushing yards on 23 carries. Summers completed 18 passes but was limited to 117 yards by sure-tackling Titans.

Davie is home against Parkland next week and finishes the regular season on the road at Glenn.

The Wonders (4-4, 1-4) broke out in a big way and smashed South Iredell 45-21 for their first Greater Metro Conference victory.

A pick-six by Xavier Chambers in the first quarter got the Wonders started, and Joey Vanover threw a touchdown pass three minutes later.

The Vikings (2-6, 1-3) own a victory against West Cabarrus in league play.

The Wonders play at Mooresville next week. The Blue Devils romped 50-14 against West Cabarrus on Friday.