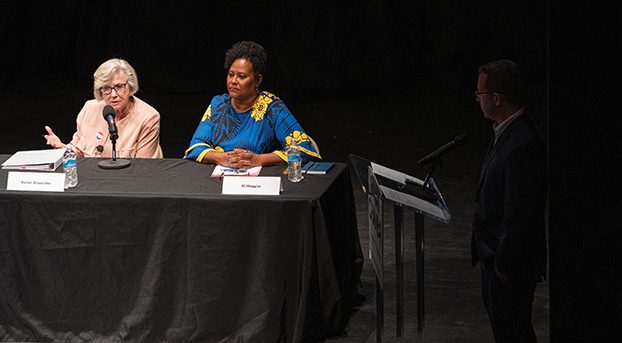 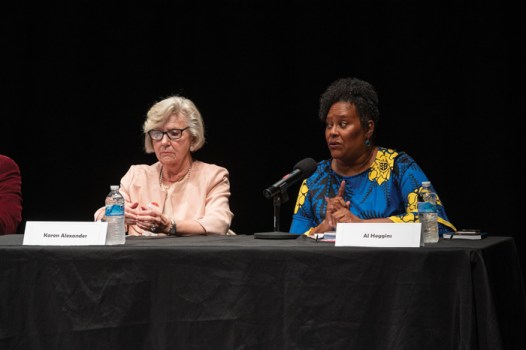 SALISBURY — Mayor Karen Alexander and Mayor Pro Tem Al Heggins, who are both running in the city’s first mayoral race, talked about their leadership styles in tackling Salisbury’s issues during a Thursday candidate forum.

The Rowan County Chamber of Commerce, Salisbury Post and Catawba College hosted a candidate forum at the Norvell Theater for the Salisbury mayoral race and council race. Spectators weren’t allowed, and the event was streamed online and WSRG-TV, the city’s public access TV network. Josh Smicker, chair of the communication program at Catawba College, moderated the event, and questions were submitted to the Post. Each candidate only had one minute for responses.

Alexander said her recent term as mayor demonstrated her ability for “calm and courageous leadership in times of challenge.” She cited positive trends and success in economic development despite the challenges of 2020, including the KIVA microloan program for women and minority entrepreneurs and the 1MBB initiative, which works to increase the number of Black business owners across the nation. Alexander added that she’s committed to increased funding for the Salisbury Police Department and local schools in addition to building more affordable housing with grants.

Heggins said in addition to accomplishments voters should look for something deeper in a mayor, who should bring in ideas and proposed frameworks for equity, inclusion and diversity throughout the city. Throughout the forum, she reiterated the call to “align Salisbury’s valued traditions with forward-thinking vision.”

Alexander said, as an architect, careful listening and assessing the needs of people with different skill sets are the only ways she can see her designs “become a reality.” Alexander said she employs those same skills in her leadership. Alexander said she’s not afraid of the work required of a mayor and credits herself with working well with organizations and people across the city and the region to advocate for resources.

Heggins said she’s a “processor” with active listening skills who can stay focused on the issue at hand despite comments that seek to dismiss or provoke her. She cited her experience as an officer in the U.S. Army, too. Heggins said she’s someone who’s experienced being treated “like a nobody” by systems that are supposed to serve her and other citizens. Because of that, Heggins said she wants to be a mayor who will serve everyone.

When asked about the top priority facing the city, Alexander and Heggins agreed on crime reduction. Alexander said efforts must include looking at root causes of the violence and sees a need for more programs that can “help young people find their way” and stay out of trouble.

Heggins said residents are “hearing too many gunshots” and experiencing too much trauma from a recent spike in violent crime. She called for fully funding the Salisbury Police Department and introducing positions outside of patrol to help officers employ innovative practices in problem-solving and de-escalation techniques. One goal of hers is to create a Congress of Neighborhoods with representatives who can build relationships across the city and work together to tackle the issue of reducing crime.

Heggins also cited the implementation of a cure violence model, which works to get at the root causes of violence to prevent crime.

Alexander discussed ongoing projects that show the potential for further development, including the recent unanimous selection of a developer for the Empire Hotel project. The design plans include a boutique-style concept with apartments, at least one restaurant and a spa. Alexander said communication with Brett Kreuger, the developer selected, has resulted in other investors considering Salisbury for future developments.

Heggins calls for creating space for entrepreneurs without brick-and-mortar spaces to have opportunities downtown with pop-up shops, which will diversity the choice for downtown patrons and increase the foot traffic. She also called for furthering efforts to keep downtown accessible for pedestrians and those who bike.

Ways to engage more people in city government was another question. Heggins said like any relationship being heard and understood are key to making it work. Local government needs to ensure residents are being heard, Heggins said.

Alexander encouraged residents get involved in one of the city’s 13 boards and commissions.

Early voting for municipalities began Thursday at the Rowan County Board of Elections office, located at 1935 Jake Alexander Blvd. West. It runs until Oct. 30, with Election Day on Nov. 2.

An article about the seven Salisbury City Council candidates’ responses during the forum will be published online today and in Sunday’s print edition.