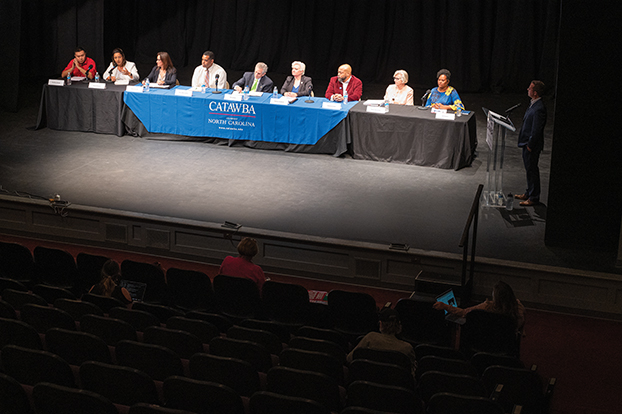 Josh Bergeron / Salisbury Post - Salisbury City Council candidates on Thursday answer questions during a forum held at the Norvell Theater. While candidates attended in person, the general public was not allowed to attend. The forum was streamed live online.

SALISBURY — Candidates in Salisbury’s city council race discussed their perceptions of the biggest priorities for the city, including crime reduction and hiring a city manager, during a virtual forum on Thursday.

The Rowan County Chamber of Commerce, Salisbury Post and Catawba College hosted a candidate forum for both the Salisbury mayoral race and council race. Dr. Josh Smicker, chair of the communication program at Catawba College, moderated the event, and questions were submitted to the Post. Each candidate only had one minute for responses.

Post, Joseph and Sheffield cited the selection of a new city manager as the most pressing issue for the city. Post said that person will serve as “the CEO of the city” and likely be around longer than department heads and council members, and should be someone who serves all citizens.

Joseph said a new manager will need a track record of implementing the council’s vision for the city, the ability to empower employees and strong negotiation and budgeting skills.

Sheffield said the city manager touches every resident of the city and the budget is a major feat. She also cited the need to ensure overall safety for residents, which includes taking care of the Salisbury Fire Department.

Other candidates cited crime reduction as the top priority, with McLaughlin drawing on his own experience as an officer with the U.S. Secret Service for 15 years. He called for increased visibility of officers to begin bridging the gap of mistrust among the community, which he’s seen work in McLaughlin’s Grocery. Officer visibility increases the likelihood people will report smaller, petty crimes that might lead to more violent, dangerous crimes, he said.

Cloward, who’s the broker for Lantern Realty, said reducing crime affects economic growth. She called for an increase in the number of officers, neighborhood watch programs and more programs and education for the public about safety.

Smith said the City Council gives direction to the city manager, but the council currently needs direction on combating violent crime. Part of his platform is the implementation of a “profound and fact-based” cure violence model, which is an “organic and innovative way” to get at the underlying root causes of violence that’s been successful in places across the nation.

Candidates were asked about priorities for downtown development and additional support for business owners.

Cloward credited the Downtown Salisbury Inc.’s collaboration with the city to help build connections among business owners, and cited a need for more of that.

Post said the downtown area has more than 20 vacancies and the city must continue its streetscape and revitalization efforts to attract investment into those buildings. He said Empire Hotel’s redevelopment looms large because the building anchors an entire block. He expressed pride in seeing more downtown buildings being bought by local residents.

McLaughlin echoed the potential for Empire Hotel to attract more people, but he said the rate of rent downtown has to be lower for beginning business owners to set up shop.

Barbee also said downtown buildings should be filled to grow the tax base and that Bell Tower Green park needs a flag pole. He cited a need for different types of businesses in Salisbury, including near the Mid-Carolina Regional Airport.

Sheffield called on all residents to shop downtown and cited the promise of future development from the Downtown Main Street Plan, which aims to make the street more pedestrian friendly. She called for further development for pedestrians and bicyclists.

Smith said an idea from Alissa Redmond, who owns South Main Book Company, is the creation of a “discovery place” downtown in a vacant building. Smith said that suggestion spoke to a greater need for cultural diversity, which requires a hospitable environment for vendors and other business owners without traditional brick-and-mortar spaces.

For another question, candidates were asked how to engage young people in city government.

Smith, a grassroots organizer and activist, suggested a “people’s assembly” with city leaders to discuss issues facing the community.

Sheffield cited the city’s Chit, Chat and Chew initiative that began before the pandemic, where council members could talk with residents in town-hall formats. She called for more people to get involved on the city’s boards and commissions.

Post said civic responsibility begins by getting out to vote.

McLaughlin said there are residents in the community who don’t feel the city’s resources and opportunities belong to them. He said council members should be out talking to residents and provide them with places where they want to be and invest.

Joseph echoed the need for council members to get out into the community. So did Barbee, who stated in his opening remarks he wanted to help bring those educated in Rowan-Salisbury Schools back to the city.

Cloward suggested a Chamber of Commerce specific to young adults who don’t have knowledge of understanding a budget or how to work in governmental services.

Joseph, district administrator for the Guardian ad Litem Program, said she’s accustomed to managing “very sad cases” that involve children who have been abused, and working to get them to safety and permanence. She credited her ability to work collaboratively and negotiate for a common good and during times of high emotion.

As a real estate broker, Cloward said she helps people with “the biggest transactions of their lives.” She called herself a leader who takes time to think and pray to avoid emotional-based decisions.

Barbee credited himself with being a good listener who tries to think outside of the box.

Smith called himself as a divergent thinker who knows how to take ideas that may seem different and find a meaningful solution for everyone. He recalled a time in the U.S. Navy when he was one of a dozen people atop a submarine that began to dive while a piece of equipment was lost at sea. Once the ship resurfaced, the captain still wanted to retrieve the equipment, which required the team coming together to work with the materials available to retrieve it in the middle of the Pacific Ocean.

As a former Secret Service officer, McLaughlin said most of what he’d use as an example may be classified. He spoke about being the leader of a cybersecurity task force, which involved bringing together local law enforcement, federal agencies and financial institutions. McLaughlin said his job always required strong communication and planning for what could happen to avoid mistakes that would put him in front of the U.S. Senate for testimony.

Sheffield said she has the “tenacity and energy” not to give up and brings a level-headed business approach as well as fact-based decision making. She recalled spending two years with a customer at Frito-Lay, where she works as an account manager, to determine why he was resistant to certain products before reaching a resolution that made the account a lot of money. She called on all candidates to stay involved regardless of the race’s outcome.

Post said he’s a former high school tennis coach and instructed players to leave the court with the same attitude whether they won or lost. He also said, as a single father, he invested “every dime he had” into a pharmacy that would later become one of the best in the nation. He asked voters to look at the record of “specifics” he’s accomplished, including bringing the KIVA microloan program, leading efforts to fix the city’s broadband, helping rewrite the city’s protesting ordinance and starting foundations for local law enforcement officers and firefighters.