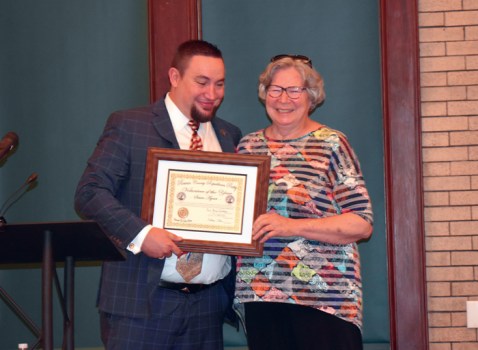 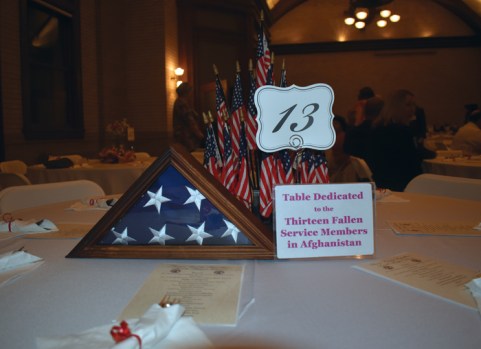 While most of the tables at the Lincoln-Reagan Dinner were filled with politicians, one table sat empty as a tribute to the 13 soldiers who were recenty killed in Afghanistan as the U.S. withdrew. Ben Stansell/Salisbury Post 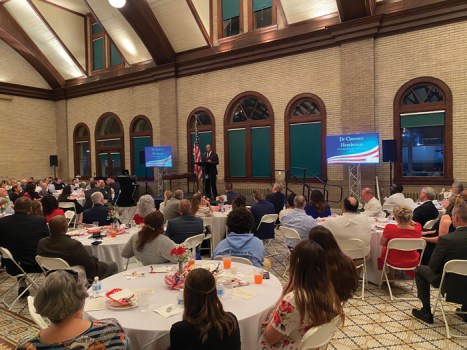 The Lincoln-Reagan Dinner is held on an annual basis by local Republican parties across the country. The Rowan Republicans have held their version of the dinner for decades, but the party didn’t hold an in-person event last year. The dinner made its return this year in the historic downtown train station for the first time.

“The freedom and choice to come out and be a part of this is a good feeling,” Rowan Republicans Chairman Brad Jenkins said. “Most people are excited to get back to life.”

The event is one of the most important fundraisers for Rowan Republicans, who use the money to support conservative candidates. In addition to being able to purchase tables for the event, attendees bid in a silent auction that featured prizes ranging from gift cards to local restaurants to a Rough Rider single action revolver.

“We use that to elect conservative Republicans in all levels of government as best we can,” Jenkins said. “We want good, strong, really in all aspects, conservatives who will allow the constitution to endure for another generation.”

Clarence Henderson, an activist and president of the Frederick Douglass Foundation of N.C., was the event’s keynote speaker. Henderson delivered a wide-reaching speech during which he had plenty of critiques for the Biden administration and Democratic Party.

“We have an administration now that doesn’t know their head from a hole in the ground,” Henderson said. “We have a president that’s economically illiterate that runs the biggest welfare system in America that’s called the government.”

Henderson’s criticism wasn’t reserved for Democrats. He called out Republican representatives in Washington D.C. for not standing up for “the republic.”

In his roughly 30-minute long address, Henderson relayed his role in the Woolworth lunch counter sit-in of 1960, a pivotal anti-segregation protest that helped catalyze the Civil Rights Movement. A fervent and vocal supporter of Donald Trump, Henderson said he is now being persecuted for his political beliefs, not his skin tone.

“You know that lunch counter that I sat at? I’m not welcome anymore, just because I have an R in front of my name,” Henderson said.

While Henderson warned that America is headed toward “economic slavery,” he also exalted the United States and said people need to “understand how great this country is.”

State Treasurer Dale Folwell was another featured speaker who took the lectern during the dinner. Folwell, the state’s chief financial officer, covered about as much ground as Henderson. He provided a status update on the state’s pension budget, which he said is currently a robust $124 billion, and spoke about North Carolina’s current unemployment rates.

“There’s nothing fair and just about the health care system of North Carolina and that’s why on behalf of those that teach, protect and otherwise serve, we’re trying to do something about it,” Folwell said.

Folwell also delved into the harrowing details of his personal medical scare with COVID-19 early in the pandemic.

“The reason I’m trying to tell this to you is this is a very serious disease and it doesn’t care what color you are, what gender you are, what political party you are, how rich you are,” Folwell said. “It has created the highest levels of death, sickness, poverty and illiteracy the likes of which we’ve never seen.”

The Lincoln-Reagan Dinner drew local conservatives and Republicans from across North Carolina. Conservative candidates campaigning for state level positions such as Supreme Court judge were in attendance. So were candidates seeking local offices such as Rowan County sheriff.

“Especially during this time with a number of candidates on the primary side of things, it’s good for (people) to get to view them, see them, ask questions and get to know them in a personal way more than an abstract way and make their own decision who to vote for,” Jenkins said.

The Rowan Republicans handed out several awards during the dinner. Susan Agner won Volunteer of the Year and Ford, who Jenkins called a “towering example of conservatism,” received the Republican of the Year award.

In conjunction with the Cabarrus and Stanly County Republicans, the Rowan Republicans will host a tri-county U.S. Senate forum at 6 p.m. Oct. 23 at Morgan Ridge Vineyards in Gold Hill.