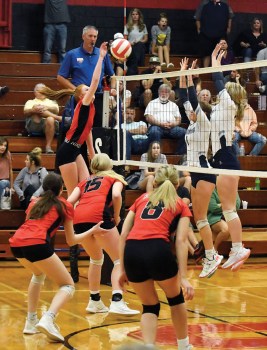 West's Kelcie Love 7 and Noe Gaeta 1 and South's Cameron Black 4 at the net. photo by Wayne Hinshaw, for the Salisbury Post 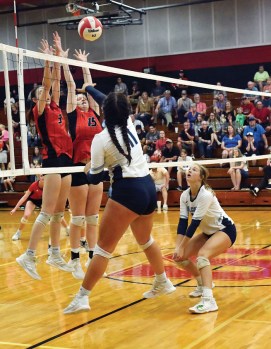 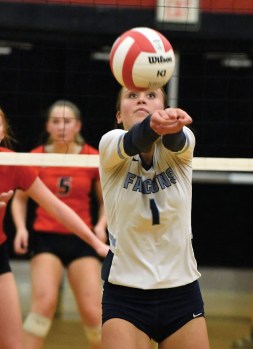 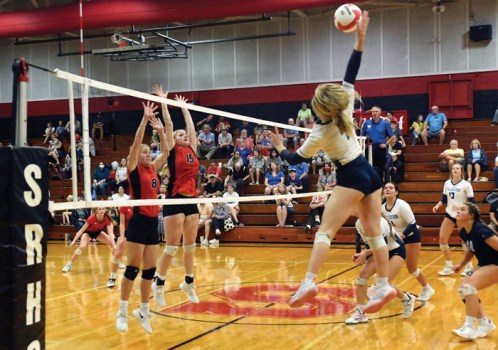 South's Kalli Nelson 8 and Avery Welch 15 at the net with West's Lelcie Love 7 on the right. photo by Wayne Hinshaw, for the Salisbury Post 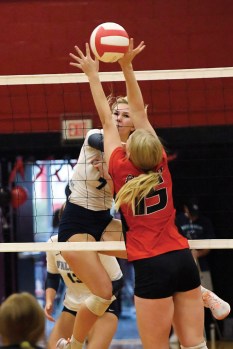 The Falcons survived their toughest test of the season in the league and successfully ran the table in the 3A South Piedmont Conference.

“I think we let ourselves get comfortable and when you get comfortable, you’re asking to get your butts beat,” West coach Jan Dowling said. “We’d put it in cruise control lately, to be honest, and this was a wakeup call that we desperately needed before the playoffs. Give a lot of credit to South. They played super-smart. That’s the best I’ve seen South play in the last four years.”

West (21-2, 14-0) got another huge night from Kelcie Love, who produced 18 kills and four blocks, but Dowling pointed at Madelyn VonCanon as the biggest difference-maker. She played more than usual and played out of her mind with 13 kills and 16 digs.

“She was the beast of the evening and if she hadn’t been on, we wouldn’t have gotten out of here with a win,” Dowling said.

Brooke Kennerly had 29 digs to lead West’s defense. Noa Gaeta had a whopping 57 assists and 18 digs. Emma Clarke is always a factor on offense, but stepped up her defense to contribute a terrific stat line — 11 kills, 11 digs, five aces and five blocks. Maia Gaeta and Anna Grace Blackledge had eight kills each. Ashlee Ennis had 10 digs and was big on serve-receive.

West settled in, but  South put it all together during the second and third sets.

“West’s defense is very good, but our hitters started finding some holes,” South coach Jenna Horne said. “We don’t have that big hitter, that go-to hitter, like we’ve had in the past, but we had a lot of girls sharing the load and getting it done by committee. I thought we were very aggressive on offense and defense tonight, and if you’re going to play with West you have to play aggressive. I’m disappointed that we didn’t win, but I can’t be disappointed with how we played.”

South (14-6, 9-5) finished tied for third in the SPC with Carson and won the flip with the Cougars for the league’s No. 3 seed for next week’s conference tournament.

“She had her 1,000th dig the last game of her sophomore season, and with COVID last season, I didn’t know if she’d be able to make it to 2,000,” Horne said. “But we went five sets with Carson and East Rowan, and then we went five more with West tonight. She had a lot of digs in all of those matches.”

“Payton Black was really solid on serve-receive and passed great, and that’s where it started for us tonight,” Horne said. “When we play the way did tonight, we have a chance to beat anyone in our league.”

West stormed back to take the fourth and fifth sets, but South could get a third shot at Lake Norman Charter and the Falcons Rowan in next week’s conference tournament.

Conference runner-up Lake Norman Charter, which swept Carson on Thursday for a 12-2 SPC record,  will be hosting two first-round games on Monday. One of those will be South’s game with sixth-seeded Concord.

West Rowan also will host two first-round games on Monday, including a county matchup between fourth-seeded Carson and fifth-seeded East Rowan that will begin at 4:30 p.m.

West will play against either Central Cabarrus or Northwest Cabarrus at around 6:30 p.m.

The Falcons then will host the two conference semifinal matches on Tuesday as well as the championship match on Wednesday.