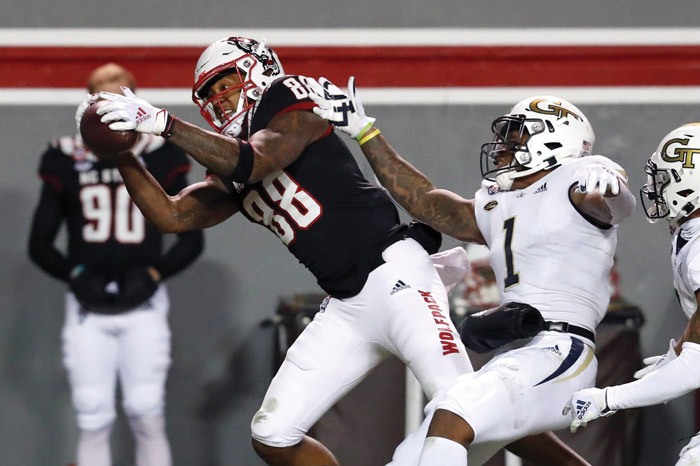 File photo courtesy of ACC — Devin Carter (88) has big-play potential for the Wolfpack.

BOSTON — Boston College coach Jeff Hafley was too busy to watch the Boston Marathon when the race ran past the Chestnut Hill campus Monday. He is hoping to make up for the lack of excitement when the Eagles play No. 22 North Carolina State on Saturday night.

“It will be our first night game with people,” said Hafley, whose first season at BC (4-1, 0-1 Atlantic Coast Conference) was during the pandemic. “We had a couple of cool night games last year with the cardboard fans.”

Although it’s been a while since there was much enthusiasm for BC football, Hafley got a taste of it when the fans stormed the field after the Eagles beat Missouri in overtime on Sept. 25 — the first time they’ve won their first four games since Matt Ryan led them to eight straight wins to start the 2007 season.

A 19-13 loss to preseason No. 3 Clemson the next game ended the winning streak. So Hafley went back to work over the off week to prepare for N.C. State (4-1, 1-0). The Wolfpack can claim the Atlantic Division title if it wins out, thanks to its double-overtime win over six-time reigning league champ Clemson on Sept. 25.

The trip to Boston College starts a stretch with four of five on the road for Dave Doeren’s team, all in the league.  “It does matter that four of the next five on the road, but what matters more is we just take this week for what it is,” Doeren said. “Let’s be the best we can be this week. We’ll worry about next week next week.”

The road has been good to Virginia with victories at Miami and Louisville following blowout losses against North Carolina and No. 16 Wake Forest.

The Cavaliers hope a return to their home stadium will keep their momentum alive. Virginia (4-2, 2-2 ACC) faces Duke, a team it has beaten six straight times. Not that any of the history matters to Cavs’ coach Bronco Mendenhall.

“It’s just the next game, right,” Mendenhall said. “ACC game, Coastal game, this year’s version, and nothing else before or after is relevant.”

The Blue Devils (3-3, 0-2) have a steep hill to climb, especially with a banged up secondary facing Brennan Armstrong. The Virginia quarterback is second nationally with 410 passing yards per game, and has 17 TD throws.

Duke coach David Cutcliffe’s strategy includes non-football things. “I guess you start every morning with a good prayer, right?” he said. “It may make a lot of sense, playing coverage against a guy like him. As I said, he’s mobile, so that increases the hardship of staying in coverage if he breaks the pocket because he sees downfield well. He’s very accurate.”

And has plenty of weapons. Virginia has four receivers in the top 68 nationally in receiving yards, led by Dontayvion Wicks with 554 yards, 10th overall.

The Blue Devils have the ACC’s second most productive running back — by half a yard — in Mateao Durant. He is averaging of better than 131 yards a contest. He’s also scored 10 touchdowns, one behind Syracuse’s Sean Tucker for the ACC lead, and provides offensive balance. Duke averages 495.8 yards, just behind the Cavaliers’ 525.8, and gets 218 of those yards on the ground per game.

North Carolina and Miami started the season as the favorites in their Atlantic Coast Conference division. That hype is long gone as they meet Saturday as two unranked teams with a combined 5-6 record.

The host Tar Heels (3-3, 2-3 ACC) have taken the biggest tumble. With the return of a quarterback Sam Howell, they were the Coastal Division favorite carrying their first top 10 preseason ranking in 24 years during Mack Brown’s first coaching stint in Chapel Hill.

Yet an experienced offensive line hasn’t protected Howell well while the Tar Heels have struggled replacing skill-position losses to the NFL. Brown said this year’s group hasn’t responded as well to adversity as the previous two seasons, most recently in  last weekend’s home loss to a one-win Florida State team.

“We should have won more games than we have in my estimation,” Brown said. “So it’s on us (coaches), period. They’ve got to play better, but it’s our job to get them to play better.”

The Hurricanes (2-3, 0-1) opened at No. 14 but fell out of the poll after losses to Alabama and Michigan State in the first three games. They’re trying to avoid their first 2-4 start since 1997, a season where they were on NCAA probation and dealing with severe scholarship limitations. They also took a major hit this week when coach Manny Diaz announced that quarterback D’Eriq King would have season-ending shoulder surgery.

Now it’s Tyler Van Dyke’s team. “Honestly we have to get the job done,” Van Dyke said. “No matter who’s at quarterback, we have to win. Right now, it’s me. I just have to be consistent, go out there and trust my teammates … and we’ll be good.”

North Carolina receiver Josh Downs has offered a bright spot in taking over as the top target with the departures of Dyami Brown and Dazz Newsome. He ranks in the top six of the Bowl Subdivision ranks in receiving yards (123.5 per game), catches (8.2) and touchdowns (seven this season).

The Tar Heels turned in an incredible offensive display in last year’s 62-26 road win against the Hurricanes in December. They gained a school-record 778 yards in the game, with 554 on the ground, in the 62-26 win.

“That’s something that’s of course still in the back of my mind as the Mike linebacker of this defense,” linebacker Corey Flagg Jr. said of the rushing total.

UNC also marked its highest scoring output and its largest margin of victory against a ranked opponent.