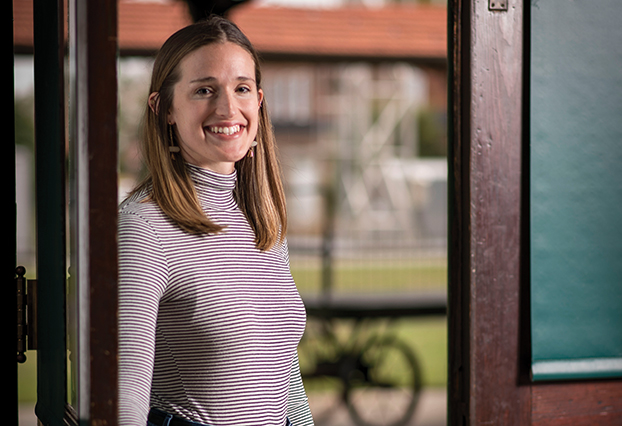 Sada Stewart poses for a photo at the Salisbury Station in 2019. Stewart worked as the Historic Salisbury Foundation director and was hired as Downtown Salisbury Inc. director.

She’ll fill a position formerly held by Larissa Harper, who was named DSI director in late 2017 and resigned in June 2020. DSI events coordinator Latoya Price served as interim director and will return to her original role when Stewart Troutman begins. In a news release, the city of Salisbury said it conducted a comprehensive candidate search that included some delays because of the pandemic.

The director serves as both a city employee and leader of the nonprofit DSI as part of a public-private collaboration with the Main Street Program. As director, Stewart Troutman will be tasked with leading a three-person Downtown Development team, which works to enhance the overall appearance and economic vitality of the downtown area. Her first day in the new role will be Nov. 29 and her salary will be $78,000.

DSI has played a key role in redevelopment plans for the Empire Hotel on South Main Street and assisted the city in 2018 with the N.C. Main Street Conference.

DSI is funded through a property tax on the municipal services district in downtown.

“After an exhaustive search in the midst of a global pandemic, we’re excited to have found our new executive director right here in our community,” said City Manager Lane Bailey. “I have always been impressed with Sada and her accomplishments as head of the Historic Salisbury Foundation and as an ex-officio member of DSI’s Board of Directors. She brings a wealth of knowledge about historic preservation that will serve us well as we begin projects such as the Empire Hotel revitalization and implement the Downtown Master Plan.”

Bailey said Price “has done a phenomenal job” serving in the interim role and will return to her original position.

At the Historic Salisbury Foundation, Stewart Troutman managed the maintenance of properties in the foundation’s permanent collection and worked collaboratively with the city and county on local initiatives for economic and residential revitalization. She also advocated for historic preservation policies, properties and projects.

“Her experience on the DSI board will enable her to ‘hit the ground running’ in her new role,” Moscardini said.

Stewart Troutman told the Post she will continue to be involved with the HSF as a volunteer and help the foundation search for a new director.

“My time at Historic Salisbury Foundation has taught me so much, and most importantly, has instilled in me a deep love of all things Salisbury,” Stewart Troutman said. “Downtown Salisbury is a unique and authentic community that I am excited to be able to work to promote and enhance, with the support of the DSI board and city staff. At the end of the day, I care most about helping Salisbury become the vibrant historic city we all know it can be, and I am proud to know that my past work with HSF, and now my future work with DSI, will continue to contribute to that vision.”