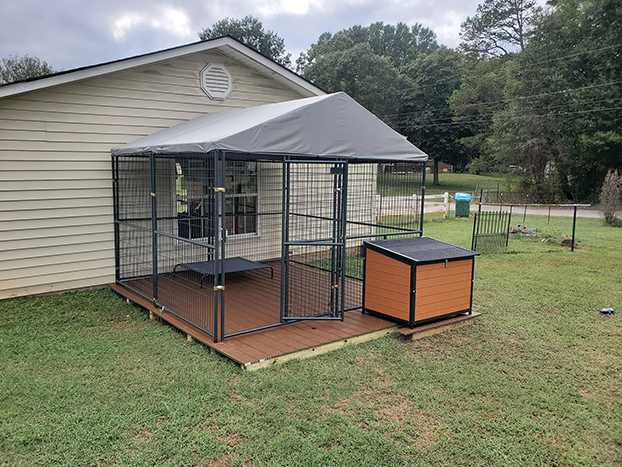 SALISBURY — Two Rowan County Sheriff’s Office K-9s can rest a little easier now with help from the Lowe’s store off of Faith Road.

Store manager Apryl McCoun has three dogs — Khloyie, Willow and Bella — that she affectionately refers to as her children. So, when the Rowan County Sheriff’s Office needed help with enclosures for its K-9 officers amid rising material prices, McCoun didn’t need to think long. She donated materials that included composite boards and two-by-fours to build two platforms and covered outdoor kennels for the K-9 officers — dogs often used to track suspects or detect drugs.

“These are not just pets. They serve us. They are working dogs,” McCoun said.

She said the cost of materials donated is several thousand dollars.

“I think that we, the community, will reap the rewards of that,” she said.

The dogs, named Fanta and Halo, have been assigned to Master Deputy R. Addison and deputy J.R. Corriher. The kennels will be located at the homes of the deputies to which the K-9s are assigned.

Normally, the sheriff’s office would enlist the help of one of its reserve deputies to build a concrete pad for the dogs. But Maj. John Sifford said the cost came in much higher than budgeted when the Rowan Sheriff’s Office checked prices for the project. So, one of the K-9 officers decided to ask Lowe’s to donate the materials.

McCoun views the donation as paying it forward and in line with her vision to give the Salisbury Lowe’s location a “hometown feel.”