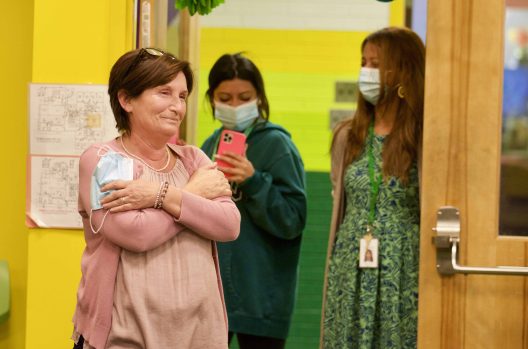 Carl Blankenship/Salisbury Post - Isenberg teaching assistant Zinka Sukurica teared up at the surprise from her colleagues. 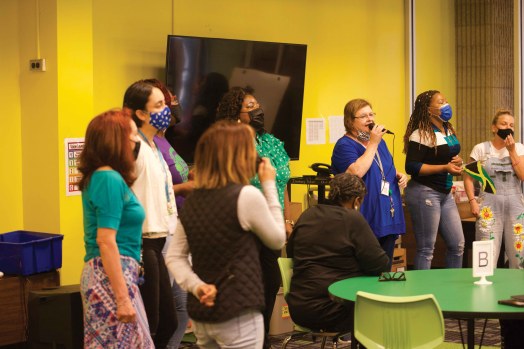 SALISBURY — Zinka Sukurica teared up as she walked into the Isenberg Elementary media center on Wednesday.

Sukurica was surprised to find faculty gathered there on a workday when there were no kids around. But they were there for her, cake and punch in tow. She pulled down her mask so they could see her smile as she looked around at the tables full of her colleagues.

They promptly put her in the hot seat, a swivel chair set up in the middle of the crowd, and told her how much she meant to them. They talked about her energy and resilience, how she had become a good friend and how she made teachers who came from other countries feel welcome.

Dany Herrera, one of Sukurica’s former students who is now studying at Rowan-Cabarrus Community College, came to speak for the surprise get-together. Herrera told Sukurica she helped him when he was in elementary school and that he remembered she was always nice to the kids.

The recognition ended with a rendition of the Sandi Patty song “Love in Every Language.”

Sukurica left Bosnia amid the armed conflict in the 1990s. She spent seven years in Germany before immigrating to the United States and landing in Arizona. The climate in Arizona did not suit her family. She also had family and friends in North Carolina. So, she later moved to Rowan County.

Sukurica was trying to find work locally and was hired at Isenberg as a teaching assistant when Isaac Heggins was principal at the school. She needed the job to survive, but 20 years later she is still there and she loves the school.

“I just don’t feel that it’s been 20 years,” Sukurica said, adding it is not all about the money and Isenberg feels like her second home.

She said the kids at the school need love and somebody to support them. She said she connects well with disadvantaged students.

“I can understand them,” Sukurica said.

“She’s passionate, she’s dedicated and she pays attention to detail,” Ellison said. “And when I say detail, not only about the curriculum but about the students, their interests, their families, their likes, their dislikes. She’s the type of person who gives 100% every day.”

Ellison said the outpouring of support shows how much people love Sukurica, someone those teachers can go to while they are adjusting to the culture shock of the United States. Over the years, even before the dual language program, Isenberg has recruited teachers from other countries and Sukurica has been there to help.