In new-look ACC, Wake the team to beat 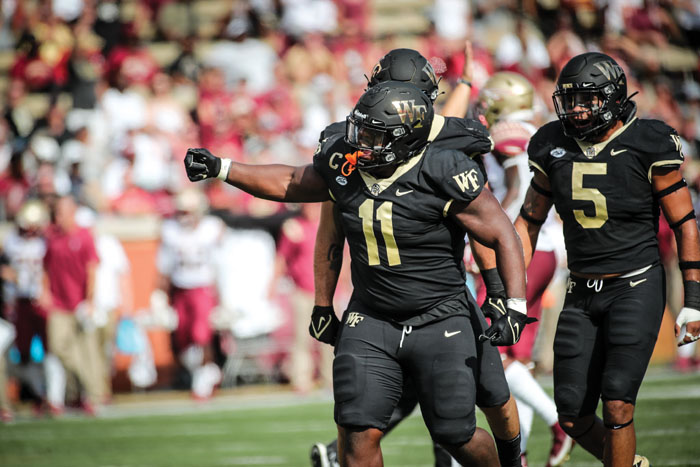 By GARY B. GRAVES

Wake Forest began this season among the large group known as “everybody else” in the Atlantic Coast Conference, the label applied to teams projected to fall in line behind perennial favorite Clemson.

Imagining a different scenario would’ve been a stretch this summer considering the powerhouse Tigers were coming off a sixth consecutive league title and yet another appearance in the College Football Playoff championship. Meanwhile, the Demon Deacons were looking to improve from a 4-5 showing (3-4 ACC) in a pandemic-affected season and were picked to finish fifth in the Atlantic Division by media.

Wake Forest has flipped that script in a big way.

The 16th-ranked Demon Deacons (6-0, 4-0) have gone from hunter to hunted as the ACC’s only unbeaten school and the highest ranked team in the league during this week’s bye. A daunting second half looms for Wake Forest, including a Nov. 20 meeting at Clemson.

Despite what lies ahead, the Demon Deacons and their high-scoring offense are currently the unexpected targets and potential challengers must either keep pace or find a way to slow them down.

“The fact that Wake is undefeated at this point shows everybody that there’s hope and everybody’s got a chance,” said North Carolina coach Mack Brown, whose squad hosts Wake Forest in a non-conference meeting on Nov. 6.

Coach Dave Clawson “does a tremendous job at Wake. They’ve got an older team and I do think that the super senior year (of extra eligibility) helped them. A lot of those guys are back from last year and they’re and they’re playing with a lot of confidence. But as far as one team being up and another one struggling a little bit, that doesn’t change who we are.”

Sophomore quarterback Sam Hartman directs this proficient attack that seems to score at will and protects the ball. Those strengths have helped earn consecutive close wins over Louisville (37-34) and Syracuse ( 40-37 in overtime ) entering the break.

Resilient as Wake Forest has been, its road to an Atlantic Division title gets tougher with Duke, the Tar Heels, No. 22 North Carolina State (Nov. 13), Clemson and Boston College still ahead.

Second-place N.C. State (4-1, 1-0) might end up holding the cards after creating this opening with a 27-21, two-overtime victory over then-No. 9 Clemson last month. That gave the Wolfpack the head-to-head tiebreaker against the Tigers, with their lone loss coming the week before in non-conference play at Mississippi State.

“That game helped us,” Wolfpack coach Dave Doeren said. “Even though we lost (at MSU), it helped us I think identify some things we can’t be. And the guys took that to heart.”

N.C. State still has the bulk of its ACC docket remaining but if it can run the table, a berth in the title game in Charlotte, North Carolina, on Dec. 4 awaits. That’s a big if with Clemson steadily improving from two September losses and Wake Forest playing well in all phases.

“We often talk about Wake Forest as this sort of nice story, a scrappy team that doesn’t turn the ball over and is fundamentally sound,” ACC Network and ESPN analyst Roddy Jones said. “And we skip over the fact that they have really good players, too. When you put all those things together, you get a really good, experienced team.”

At the same time, Jones notes that it’s too soon to declare Clemson’s ACC reign over. Even with losing All-Americans Trevor Lawrence and Travis Etienne, the Tigers are still considered to have the most talent in the conference.

And they aim to show it with the league title still within reach.

The Tigers (3-2, 2-1) visit Syracuse on Friday night after a bye to begin a four-game stretch with three road contests, which includes a visit to Coastal Division-leading Pittsburgh on Oct. 23. As it turns out, Clemson will host Wake Forest in its conference finale next month, a meeting that could decide the Atlantic Division.

Coach Dabo Swinney warned this week that while his team isn’t done by any measure, they can’t afford to lose ground.

“If we want to have any chance at all of staying in in the hunt, we’ve got to take care of business,” he said. “If we were 5-0, wouldn’t this be the biggest game of the year? I mean, we need to win it, right? Nothing’s changed.

“This team will be judged by how we finish, and it doesn’t matter if you’re 5-0. … That’s just college football,” Swinney said. “So, we’ve got a long way to go.”

Few would be shocked if Clemson ends up in a familiar place atop the standings because beating them remains a challenge. It doesn’t matter if the Tigers just happen to be in unfamiliar spot as the predator instead of the prey.

“We know Clemson is still one of the most talented teams in the conference regardless of their record and they’ve lost to two really good teams,” Syracuse defensive back Garrett Williams said. “We don’t really try to emphasize any game over another, but we also have to have the realization that it’s there and just seeing the opportunity that we have ahead.”