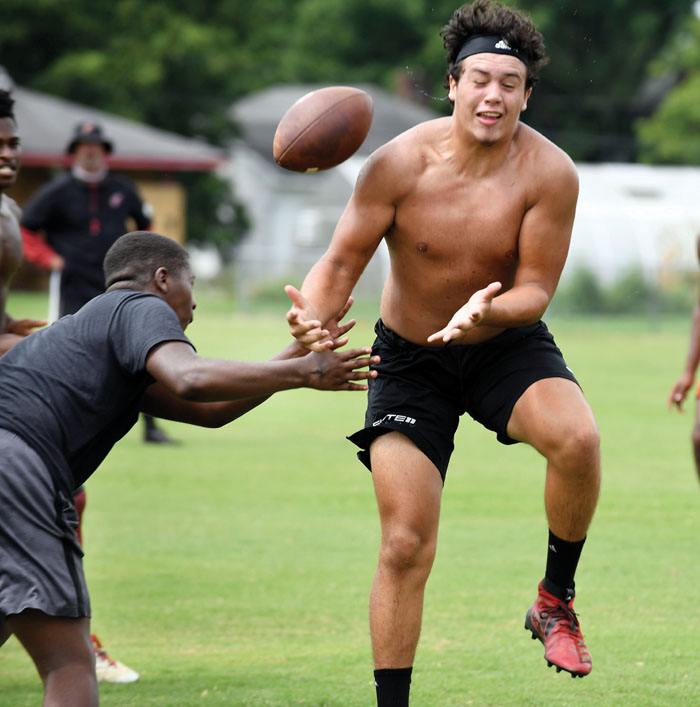 Salisbury's Reed Fugle tries to catch a pass during an earlier drill. File photo by Wayne Hinshaw/For the Salisbury Post

SALISBURY — It’s mid-October, but it’s 80 degrees as the Salisbury Hornets sweat their way through another brisk practice.

Former SHS head coach Gus Andrews watches from the hill overlooking the practice field and nods his head in approval at the spirit and at the muscular bodies, one of them belonging to Georgia commit Jalon Walker.

Head coach Brian Hinson and his staff have convinced the Hornets that they’re not getting ready for Lexington. They’re getting ready for Maiden, for Shelby, for Reidsville, for whoever is standing in their way in November. That’s not an easy sell, but the team has bought in.

The schedule has been weak, although you can’t control whom you play in your own conference.

Salisbury has outscored opponents 393-27, which is almost comical math, and that’s with plenty of running clocks and with offensive starters sitting down early. The Hornets are ranked only fourth in 2A West by MaxPreps due to their shaky strength of schedule, but they know how good they are. The most serious opponent so far was Thomasville (6-1), and the Hornets were up 42-7 on the Bulldogs when they took their foot off the gas.

Thomasville got two late scores after Salisbury reserves turned the ball over. West Davidson got a TD after recovering a bad snap on a punt near the Salisbury 5-yard line.

That’s been it as far as points allowed.

“We always want the goose egg as a defense,” Fugle said. “The zeros mean a lot to everyone.”

The 220-pound Fugle, who plays the strong side defensive end, has an interesting background.

His father, Rudy Fugle, is from Livonia, N.Y. Rudy developed a passion for racing early in life. He went to Rochester School of Technology before coming south with the dream of landing a job in NASCAR. He earned a degree in mechanical engineering at UNC Charlotte before he steadily worked his way up through the racing ranks. In the fall of 2020, he was named by Hendrick Motorsports as the crew chief for William Byron and the No. 24 Chevrolet Camaro.

“His father is all over the place with races,” Hinson said. “But he does everything possible to support Reed on Friday nights.”

Reed is the oldest of four siblings. His mother, Carie, a science teacher, worked previously at Salisbury High, but is now at West Cabarrus.

Fugle got started in football in elementary school. Football was his father’s second-favorite sport after racing.

Fugle performed admirably as Salisbury’s jayvee quarterback for two years, but Vance Honeycutt was ahead of him, and ultra-talented Mike Geter was in the pipeline to follow Honeycutt.

“Reed was a key part of successful jayvee teams as our quarterback,” Hinson said. “But he was always that jack of all trades who could play a lot of positions. He’s played some running back, some H-back, some linebacker. He’s still our backup quarterback if something should happen to  Geter, but he’s found a home at defensive end the last two years. He split time there last year, but he played enough that we looked at him as a returning starter. We were never worried about his spot.”

In last Thursday’s game with East Davidson — a 49-0 road shutout of a decent team — Fugle was in on 10 tackles. That’s an unusual number of stops for a defensive lineman, but East Davidson runs the ball on almost every play, and on film, Fugle doesn’t look as big or as quick as some of his teammates. So East Davidson was coming in his direction.

“Well, you don’t want to run it at (nose guard) Nick Hall and you probably want to run it somewhere where Jalon Walker isn’t,” Hinson said with a chuckle. “So you try to run it somewhere else. What our defense did very well in that game at East Davidson was make their offense go side to side. They wanted to go straight ahead, but we were able to take them out of that.”

The shutout was Salisbury’s fifth.

While it was his strongest statistical game of the season, Fugle doesn’t lose any sleep worrying about the stat sheet.

“I’m not one of our big playmakers and I’m not normally a guy who’s going to get a bunch of stats,” Fugle said. “I just do my job. I want to grade out well when the coaches watch the film. Getting that grade of 93 or 95 and being consistent, that’s what I take pride in.”

When the Hornets’ coaching staff gets together on Sundays for film study, Fugle almost always grades out well.

“He makes an impact on our games,” Hinson said. “The film shows he’s in the right place and he gets involved in a lot of plays.”

Fugle is also important to Salisbury’s special teams as the short snapper on extra points and field goals and the long snapper on punts. Salisbury hasn’t had to worry about snapping for a while,  but Jackson Murphy, who was great at it, graduated last spring. Fugle replaced him.

Fugle missed the West Davidson game with an injury. That’s the night the Hornets had the errant long snap that led to a TD for the Green Dragons. Long-snapping is one of those things you don’t notice until something goes awry. Fugle should be able to take care of that chore smoothly the rest of the way.

Fugle isn’t a guy who’s going to make headlines often, but he did get noticed back in the spring when he made a sack during Salisbury’s dominating performance in the 2AA state championship game.

“I got a sack, but then I celebrated it a little too hard,” Fugle said with a smile. “The guys haven’t forgotten. They’re still giving me all kinds of grief about it.”