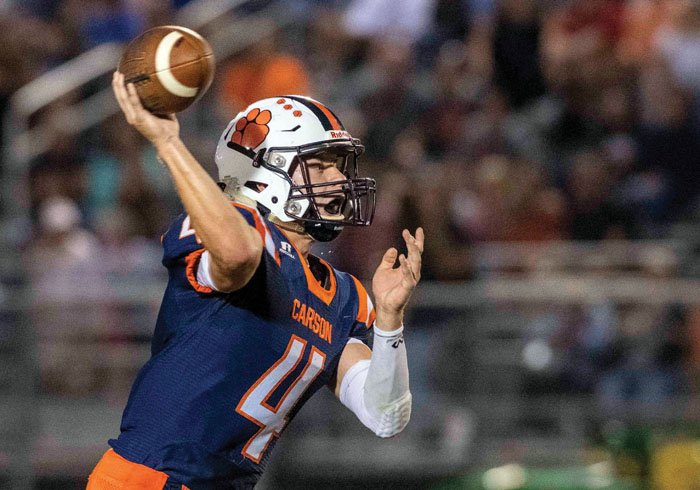 Carson's Hunter Burris had a key pass completion after a fake punt on fourth down to set up a Carter Dowd touchdown, but the Cougars came up short in the end. File photo by JON C LAKEY / FOR THE SALISBURY POST

Carson had lost three straight in the series, so it was a feel-good triumph for the Cougars, who notched their first South Piedmont Conference win of the season.

Carson ended a four-game skid and tasted victory for the first time since Sept. 3 when it routed South Stanly.

Defensively, the Cougars were able to contain East’s short-passing game.

“We were able to get good pressure on the quarterback with three or four guys, and that was big for us,” Crosby said. “We were able to mix up some coverages, and our guys did a good job with executing the defensive game plan.”

Then they controlled the second quarter. When they scored late in the first half, they carried a 24-0 lead to the break.

“East did a good job of stopping our option attack for a couple of series, so we switched to power and iso,” Crosby said. “Our offensive line was knocking them off the ball. We were able to move the ball consistently and we broke a few long ones.”

East (0-7, 0-4) got a touchdown from running back Kilighia Ellis with 5:34 left in the third quarter and it appeared the Mustangs might get back in the game.

But Carson answered, scoring in less than two minutes.

Then the Cougars tacked on two more scores in the fourth quarter for the final margin.

“This is a big rivalry, so I’m very proud of how we played tonight,” Crosby said. “We handled playing on a Wednesday very well, and now we’ll get a little time off. We can use that. It’s been a long season.”

Carson returns to action on Oct. 22 at Central Cabarrus and finishes the schedule with a road game at South Rowan on Oct. 29. It’s not out of the question for Carson to close with a three-game winning streak.

The Mustangs will wrap up their season with SPC home games against South Rowan (Oct. 22) and West Rowan (Oct. 29).