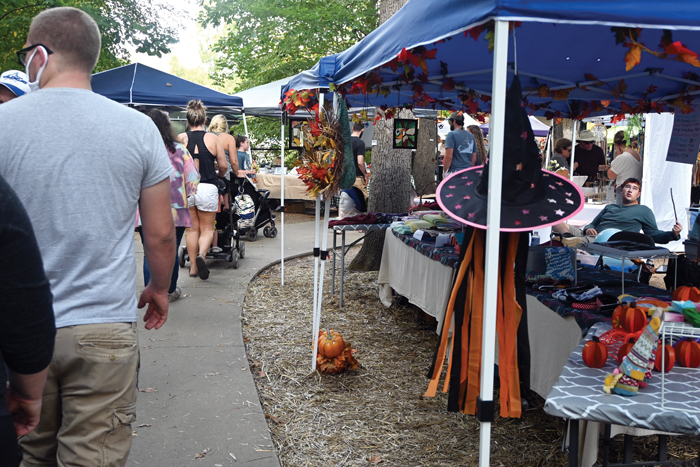 SALISBURY — The Rowan County Board of Commissioners during a virtual meeting on Wednesday approved spending $165,380 to cover payroll costs for staff who worked the Autumn Jubilee.

Due to safety concerns employees may have had about working an event that drew thousands of people to Dan Nicholas Park on Oct. 2-3, the county did not require anyone to work the Autumn Jubilee. Instead, the county offered to pay approximately 100 volunteers $60 per hour.

“We wanted to ensure that we would have staffing all the way up through the event and the event would not have to be canceled at the last minute, which could create quite a bit of hardship on the vendors,” County Manager Aaron Church said.

The $165,380 approved by commissioners Wednesday was well over the $120,000 approved by the board last month to pay for the festival’s staffing. The actual payroll cost for Autumn Jubilee exceeded the approved total because the prior figure did not include fringe benefits and pay for contracted emergency personnel.

The previously approved funding was supposed to be allocated entirely from American Rescue Plan Act funding. The county is slated to receive $27 million over the course of two years through the American Rescue Plan, which is generally intended to pay for COVID-19 related expenses.

However, there are questions as to whether the federal funds can be used to cover the payroll costs for county employees who volunteered. The measure’s interim final rule states that the amount of “premium pay” an employee receives can not surpass $13 in additional hourly wages. While the county classified the wages for Autumn Jubilee volunteers as “volunteer pay,” not “premium pay,” commissioners on Wednesday approved spending $121,248 from the general fund to cover $47 per hour in employee wages. The $44,132 needed to cover the remaining $13 per hour in employee wages and benefits will come from American Rescue Plan funding.

If the county receives guidance that the entire Autumn Jubilee payroll cost can be covered by the federal funding, the county will reimburse the general fund.

“To err on the side of caution, we’ll use general fund money at this time and if approved by the appropriate officials, then we’ll use ARPA money,” Church said.

The county plans on paying Autumn Jubilee volunteers on Friday. Commissioners will convene for their regularly scheduled meeting Monday at 6 p.m. in the J. Newton Cohen Sr. Room on the second floor of the County Administration Building.