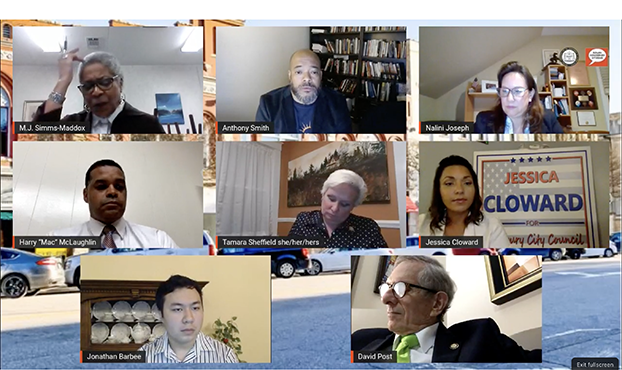 The forum was hosted by the Rowan Concerned Citizens and the Salisbury-Rowan NAACP. M.J. Simms-Maddox, a retired Livingstone College political science professor, moderated a discussion from submitted questions for incumbents David Post and Tamara Sheffield, along with challengers Anthony Smith, Harry McLaughlin Jr., Nalini Joseph, Jonathan Barbee and Jessica Cloward. The seven candidates are competing for four open seats. Candidates had just one minute to respond to questions.

Overall, council candidates said they felt the city fared “fairly well” during the pandemic but still wasn’t immune to the same challenges and trends seen across the nation, including debates about mask wearing, vaccinations and supply chain issues. Multiple candidates cited the importance of properly spending the city’s share of American Rescue Plan funds, with more than 90% of those dollars left to be obligated. McLaughlin suggested providing small business owners with resources and plans to protect themselves from future threats.

Barbee said he helped his father construct laboratories for vaccine research across the Southeast with his family business.

Sheffield said there’s still a lot of work left in getting more of the population vaccinated and that it’s incumbent upon her to encourage vaccinations.

Sheffield also cited better-than-anticipated sales tax revenue that provided a surplus of more than $1 million in the 2021-22 fiscal year budget, which then provided wage and benefit increases for Salisbury Police officers and Public Works employees. Post said the city set good examples by approving incentives for city employees and that increasing vaccination rates continues to be an uphill battle because of political affiliations.

One question was about investment outside of just the downtown area. Smith said it’s possible “to walk and chew gum at the same time” by recognizing the downtown attracts people while working toward looking at the communities that have been left out. He cited the city’s high rate of poverty and emphasized the importance of hiring the right city manager, who Smith said should be not only the chief executive officer but also the “chief equity officer.”

Joseph and Cloward both said the Jake Alexander Boulevard corridor is in need of further development. Joseph said the city’s abundance of green space and parks provide opportunities to focus on wellness initiatives for segments of the population.

McLaughlin said the historic Monroe Street School could be a great incubator for students and that investments should be made to build up businesses across the city.

Sheffield cited the promise of the Kesler Mills site in the Park Avenue neighborhood once it’s cleaned up. She also cited the city’s annual Community Development Block Grants from the federal government, which can be used for housing revitalization, economic development and infrastructure projects.

Barbee said the western area of the city is primed for growth and echoed the suggestion of an economic incubator that promoted development. He said council members need to re-evaluate which areas of the city may be missing out on economic growth.

Post emphasized the importance of investing in downtown because around 20 vacant buildings currently “pull down the tax dollars.” Filling them, he said, helps provide revenue to use for other areas and needs.

Simms-Maddox asked candidates what measures council members can take beyond policing to maintain safe communities. Post said the fire department interacts with 7,000 residents each year and cited the Salisbury Police Department’s vision statement that “every officer has a neighborhood and every neighborhood has an officer,” a tenant of community policing.

“Crime tends to go down when there’s a human touch,” Post added.

Sheffield said public safety for her also includes clean and safe drinking water, along with proper sewage. In addition to more community involvement, she credited the recent implementation of a victims advocate and homelessness advocate at the Salisbury Police Department.

McLaughlin said the city should construct a new Fire Station No. 3 on Mahaley Avenue to more efficiently serve residents in that area. He also said American Rescue Plan funds could help with sewage and stormwater drainage issues in areas where rainfall creates frequent flooding.

Joseph said increasing safety outside of policing requires a lot of agencies coming together, which may include rehabilitation program specialists, therapists and members of the faith community.

Smith said he’s known people in the community who have lost their lives to violence and has preached too many eulogies on the topic as a pastor. He emphasized the need and success of implementing a violence cure model to get at the root causes of violence, which often involve socioeconomic barriers. It’s also an initiative that would deepen and extend the work of the city’s Cease Fire initiative, a partnership between SPD and the NAACP to address gun violence.

“It’s time to think beyond the norm,” Smith said.

Candidates were asked their thoughts on the city now having a separate mayoral election. Post credited Sheffield and himself with wanting to take this issue to the public with numerous public input sessions before a vote. Post said there shouldn’t be “accidental mayors” as a result of the council appointing the highest vote-getter. Barbee said the candidate elected to mayor with the intent to become mayor can help better set a vision for the council. Sheffield said her decision to pursue this issue is because the policy to appoint the highest vote-getter was based on precedent, not policy. She added that her vote counts just as much as the mayor.

McLaughlin said the votes may be equal, but there’s more clarity about who will be setting the stage for the council. Joseph said it’s ideal to have someone who specifically wants the job because it’s a time-consuming one that requires a lot of passion.

Smith said he had a different perspective because some people in the community didn’t know about the issue or that it was happening. He’d like the next conversation to be about extending the term lengths so that “most of their time isn’t spent campaigning and competing with each other.” Post said he hopes council members explore that because he was in support while discussing the issue of a separate mayoral race.

Smith said language creates the reality and it’s important to “have word care” as leaders. Another question asked about tackling the issue of misinformation. Joseph said such instances require dialogue with those who have the right information. McLauglin said communication was key during his time working in intelligence because it requires coming together “as one voice” and not having rogue individuals making comments separately.

Sheffield said it’s important to have unity whether they agree with each other as long as it’s a decision that’s best for Salisbury. She also said council members should be protective in defending the city.

Cloward said transparency is key and that judgment can’t be made without first receiving all the facts, which can lead to emotional responses.

Barbee said what’s spoken in council meetings should be professional and that coming together requires a mindset of achieving goals together.

Council members described their concept of the role of a council member. Smith said the role is to enact policy and make decisions, but conceptually he views it as “the convener” of different mutual interests that can lead to “shared flourishing.” He echoed Sheffield’s call to be guardians of the city for the good and ensure the overall well-being.

Joseph likened council jobs to being “the mothers and fathers for our city,” especially when residents seek comfort.

Barbee said council members provide varying perspectives on how to address issues and must work together to improve upon them. McLaughlin said a council member’s role is to ensure safety and provide opportunities for success.

Sheffield said the role involves creating policies, steering the decisions of the city manager, establishing a budget that spends tax dollars equitably and ensuring safety. She emphasized the need for role models, honesty and transparency. Cloward described a concept of “servant leadership.”

Post said they’re “the face of the community,” and that a lot of what they do is help residents navigate bureaucratic hurdles to get issues fixed.

Before the council candidate forum, Rev. Dee Ellison of At the Cross Ministries moderated an hourlong forum between Mayor Karen Alexander and Mayor Pro Tem Al Heggins. An article about that discussion will be published online today and in Thursday’s print edition.