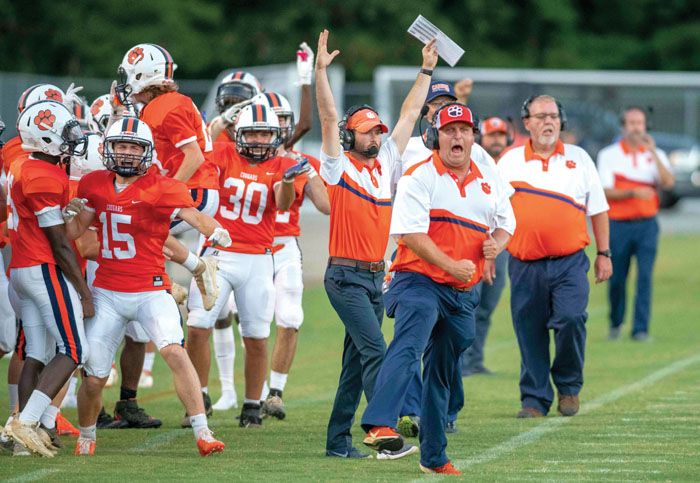 The Carson sideline celebrates a late first half touchdown. The Carson Cougars fell to visiting Greyhounds of Statesville High School 41-30 in the opening games of the high school football season. JON C LAKEY / FOR THE SALISBURY POST. 8/20/21, China Grove,NC.

The Massey Ratings list Carson as a 17-point favorite with an 81-percent win probability for this unusual Wednesday night South Piedmont Conference game, but those ratings are based on cold stats and percentages and this has been a red-hot rivalry from the start.

But East traditionally plays harder against Carson than it does against anyone, and there’s also the fact that the Mustangs have won the last three meetings in the series. There were two tight ones, plus a 53-30 trampling of the Cougars in 2019.

Carson’s most recent victory over the Mustangs was another squeaker — 37-34 in 2017 — so don’t expect anyone to win tonight by 17 points.

While Carson has lost four straight outings since routing 1A South Stanly in early September and East has lost them all, both teams come into this game off encouraging performances.

Carson trailed 30-14 at Northwest Cabarrus on Friday before a 90-yard Jay Howard kickoff return touchdown suddenly turned things around. It was 30-all before the Trojans knew what hit them and Carson had a chance to win right down to the last minute.  .

About 12 miles away, East played so energetically on defense and made so many explosive plays on special teams that the Mustangs probably should have won their game at Central Cabarrus. But the Mustangs made critical mistakes on offense, squandered scoring chances and lost 13-7.  It was still a step forward.

Carson leads the overall series 8-7. That includes East’s win against Carson in the 2012 state playoffs.

Carson runs the ball almost all the time. QB/DB Hunter Burris has been the Cougars’ statistical leader and has accumulated 526 rushing yards as well as 243 passing yards.

But back Carter Dowd is probably the key indicator of Carson success. When Dowd is getting consistent yards and is heavily involved in the offense, Carson is at its best. He has 335 yards on 79 carries and has scored seven touchdowns.

QB Aiden Schenck has 396 passing yards. He’s a rugged customer who runs like a bulldozer and throws accurately, but the Mustangs have been plagued by snap issues, drops, turnovers and penalties. They haven’t been able to move the ball consistently.

In recent games, Tijon Everhart has injected a dose of speed into East’s attack. He’s capable of providing big plays.

Carson is going to try to run it. East’s defense, at times, has stood in fiercely against the run, so this could be a grinding battle down to the wire.

October 14 and 15 are Wellness Work Days for Rowan-Salisbury schools. With their teacher/coaches in mind, Carson and East moved this game up, as well as the jayvee game between the schools that was played at East on Tuesday.

Kickoff in China Grove is set for  7 p.m.