Area Sports: Another crown for Yatawaras 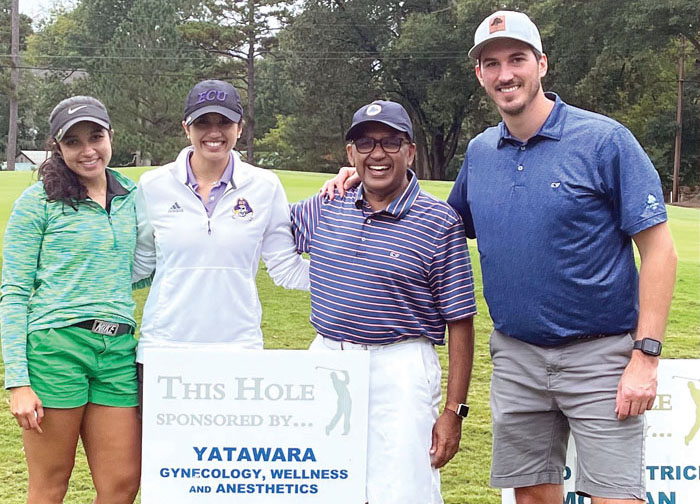 Sisters Lily and Grace Yatawara, fresh off a recent win in the annual Labor Golf women’s division, led their team to the championship of the 46th annual Salisbury Civitan Golf Classic at the Country Club of Salisbury.

The sisters were joined by Chanaka Yatawara, their father, and former Catawba College golfer Ryan Szaly in posting an impressive best-ball score of 20-under par 51. They won the First Flight by four shots.

Winning the Second flight was the team of Kevin Walser, John Spear, Brian Sheldon and Lee Fesperman with a score of 60.

The Third Flight was captured by the team of Aron Burleson, Payson Schumacher, Guy Roberts and Craig Gardner with a 59.

Longest drive competitions were won by Szaly and James Davis, while Sarah Coltrane and Chris Reed won the closest to the pin contests.

The Civitan Club of Salisbury, which celebrates it’s 100th anniversary in 2022, hosts the annual golf classic to raise funds for the club’s charitable causes. Beneficiaries of Civitan funds include Special Olympics, Rowan Helping Ministries, Boys and Girls Home, scholarships for local high school and college students and the Civitan International Research Center on Birmingham, Ala. Tournament co-chairs Jimmy Greene and John Sofley expressed sincere thanks to all individual and corporate sponsors of the event as well as to Country Club golf professional Chad Campbell and his staff.

Javon Hargrave (North Rowan) had his sixth sack of the season in Philadelphia’s 21-18 win at Carolina on Sunday.

This is conference tournament week, with players looking to qualify for regional competition in either singles or doubles.

Conference championship meets are coming up onOct. 19, with the Central Carolina Conference at Denton Farm Park and the South Piedmont Conference at Frank Liske Park in Concord.

The Carson-East Rowan jayvee game will be played tonight in Granite Quarry, with varsity action on Wednesday at 7 p.m. at Carson.

Sierra Davis made one save.

Catawba plays at Barton on Wednesday.

Limestone equalized late in regulation then scored a winner in overtime to edge Catawba’s men 2-1 on Saturday at the Frock Soccer Complex.

Catawba plays at Queens on Wednesday  at 7:30 p.m.

Tywun Rivens (Salisbury) made four tackles for Campbell in Saturday’s win by the Fighting Camels against Gardner-Webb.

AJ Merriman (Carson) played in his first game for Guilford in Saturday’s loss to Shenandoah and had two catches for 24 yards.

Gabe Hinceman (East Rowan) had a reception for Barton.

Isaiah Black (A.L. Brown) had two catches for Catawba in Saturday’s win against Carson-Newman and returned two kickoffs for 49 yards.

Christian Bennett (East Rowan) made two tackles for the Indians.

Josh Malloy (Carson) and Andrew Bradshaw (Carson) saw action for Carson-Newman, and Malloy served as a captain for the pregame coin toss.

Caleb Mauldin (West Rowan) is playing at Caldwell Community College and scored seven points in a 72-41 romp over Enterprise State. He had six points and seven rebounds in a win against Vol State.

Richmond’s Michael Childress (Cannon School) shot 73-73 — 146 on Monday in the Georgia State Invitational and is tied for 34th.

High Point’s Charlie Barr (Cannon School) shot 74-70 — 144 on Monday in the Carolina Collegiate in Spartanburg and is tied for 20th.

Catawba rallied for a four-set win at UVA Wise on Saturday night at the Prior Convocation Center.

Catawba is at home Wednesday against Lenoir-Rhyne at 7 p.m.

Tori Hester (West Rowan) had eight kills and three blocks for Troy in a sweep at Appalachian State on Sunday.

Lindsay Elmore (Carson) had eight kills, three blocks and three aces for Queens in a sweep of UVA Wise.

Anna Rymer (South Rowan) had seven kills for Ferrum in a loss to Eastern Mennonite.

South Rowan has won three straight, including a 24-12 victory against Concord last week.

Thompson, 68, was the oldest participant in the draw. He took home the $350 prize.

Thompson is entered in the National Championships to be held on Nov. 20 in Tampa.

It attracted the highest number of participants in the tournament’s history with 561 boats from more than nine states and awarded more than $400,000 in cash prizes.

With their single-engine vessel, Bare Necessities, Captain Cameron Yow and his crew, Mitchell Pigg and Bradley Flowe of Kannapolis, took first place in the tournament with a 45-pound king mackerel. They won a total of $58,830 for their efforts.