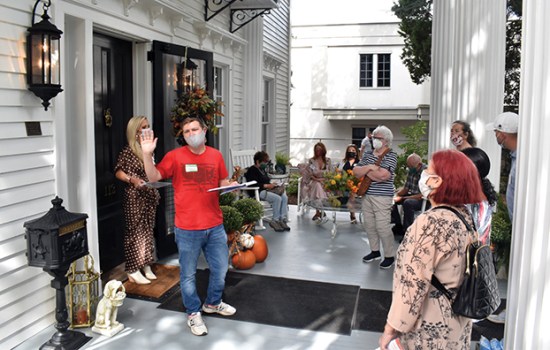 Spencer Dixon provides guests with a history lesson of the Fulton Mock Blackmer House, which suffered a devastating fire in the 1980s. The house, owned by Dixon's family, has been revitalized and featured on the OctoberTour multiple times. Ben Stansell/Salisbury Post 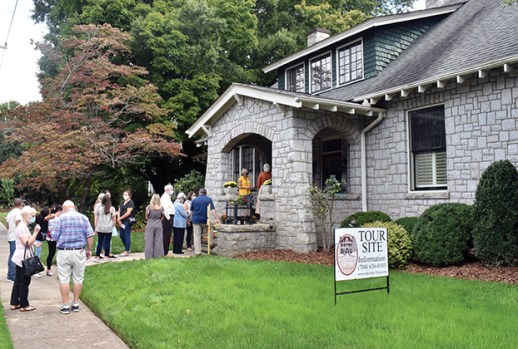 OctoberTour patrons wait outside of The Rock House on Sunday afternoon. The house was one of six in-person stops featured on the annual tour this year. Ben Stansell/Salisbury Post 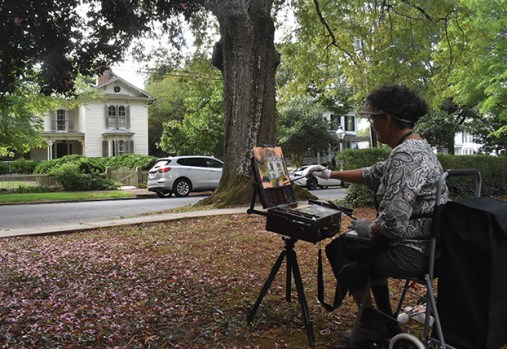 Celia Jarrett, a member of the local Plein Air artist organization, paints a home from the lawn of the Josephus Hall House. While the home being painted was not on the OctoberTour, the group spent Saturday painting the historic homes that were. They sold their work on Sunday. Ben Stansell/Salisbury Post 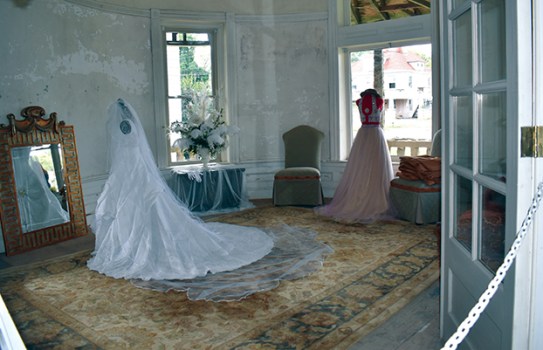 The new owners of the Napoleon Bonaparte McCanless House have plans to transform the historic home into a wedding and events venue. A preview of their vision was on display during OctoberTour. Ben Stansell/Salisbury Post 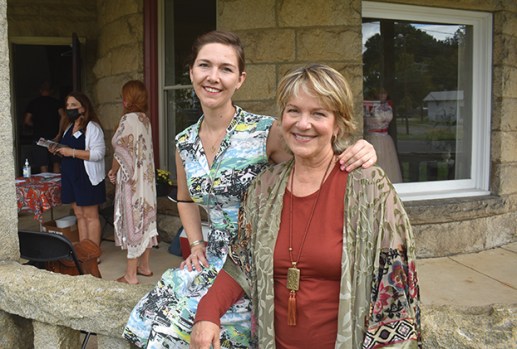 Paris and Ellis Furst pose together in front of the Napoleon Bonaparte McCanless House. The daughter-mother duo visited Salisbury Sunday to see the home built by their ancestor. Ben Stansell/Salisbury Post 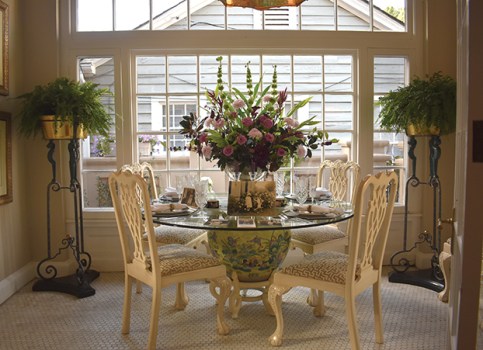 This elegant flower display was one of an almost endless number of sights to see in the Leo Wallace Sr. House. The home's extensive renovation process lasted several years and was done largely by its owners Sherry and Steve Beck. Ben Stansell/Salisbury Post 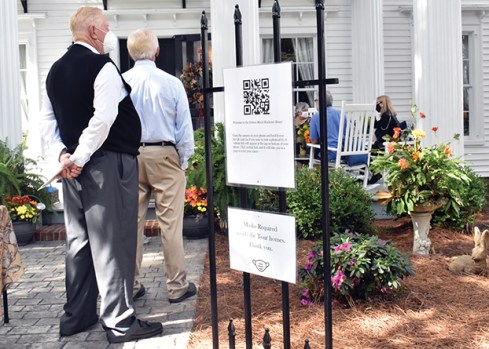 Pandemic protocols were in place during this year's OctoberTour. Patrons either had to show proof of vaccination or a negative COVID-19 test and were required to wear masks inside each home. Guests checked in to each house by scanning a QR code with their phones. Ben Stansell/Salisbury Post 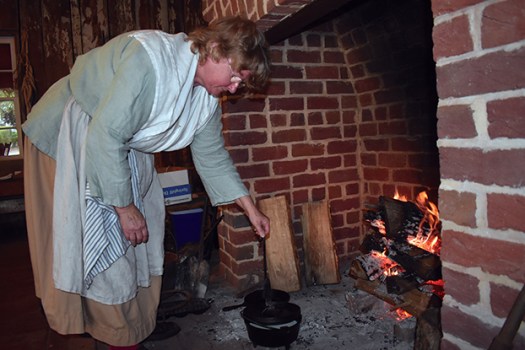 Susan Worcester demonstrated how to make farmer's cheese the old fashioned way during OctoberTour. Worcester has studied historical cooking for several years and showcased her knowledge in the detached kitchen of the Josephus W. Hall House. The kitchen was staffed by enslaved persons before emancipation. Ben Stansell/Salisbury

The tour returned from its virtual format last year to offer participants a walk through six historic sites built between 1820-1925.

“I’m super impressed with not only our volunteers and planners and staff who made sure the event went smoothly, but with all of the attendees,” said Sada Stewart Troutman, executive director of the Historic Salisbury Foundation. “We had an enthusiastic group of attendees who made sure they rolled with all of the requirements and changes this year. Everybody was happy to not just support the Historic Salisbury Foundation, but to enjoy the tour again.”

A virtual component was offered for those unable or not comfortable with attending in person. Patrons were required to show proof of vaccination or a negative COVID-19 test and had to wear masks in each home.

Partaking in this year’s OctoberTour was about more than seeing some of Salisbury’s finest homes for Ellis Furst and her daughter, Paris, who lives in Germany. For them, it was a way to reconnect with their family’s past.

Ellis is the great-great-granddaughter of Napoleon Bonaparte McCanless, who built the granite house on South Main Street for his family in 1897. The house has changed hands and condition over the years, but was recently sold by the Historic Salisbury Foundation to private owners.

Ellis spent the first four years of her life on the street in Salisbury she was named for and now resides in Wilmington. She’s investigated her family’s rich genealogy over the years and has been targeting a trip back to her hometown to see her ancestor’s home.

Walking through the upstairs rooms of the house, Ellis said, was an experience that surpassed her expectations.

“It was better than I imagined,” Ellis said. “It’s down to the bare bones and has the patina and smell of age, so you can really see through the floors and the walls. It’s like somebody without any clothes on. The house is bearing its soul at this point.”

The new owners of the house, Sandra Toscano and C.P. Edgar, plan to convert the home into a wedding and events venue. To preview the future of the structure, wedding dresses and floor plans were on display in the house during OctoberTour.

Toscano and Edgar might already have a customer lined up.

“It’s wonderful,” Ellis said. “All my daughters are going to get married here.”

There’s plenty of work left to be done on the Napoleon Bonaparte McCanless House, but Toscano and Edgar could find inspiration in several of the other homes featured on the tour.

It was only a few years ago that kiddie pools were being used to collect water pouring onto the second floor of the Leo Wallace Sr. House. The home, purchased by Sherry and Steve Beck in 2015, needed a roof replacement and extensive renovations throughout.

The Becks have always felt the pressure of having their home on OctoberTour.

“I’ll be out there in the front weeding and somebody will drive over, I don’t even know who they are, they’ll pull up in their car and say, ‘When is your house going to be on tour?’” Sherry said. “It was almost like we had to do it for the people because everybody has wanted to see it.”

But Sherry, a landscape architect, wanted everything to be perfect before it was seen by dozens of friends and strangers. Finally letting the public inside the home, Sherry said, was a rewarding experience.

“It has been a really fun project and I feel like we’ve given this house back to Salisbury for another 100 years,” Sherry said. “It’s a gift to Salisbury.”

David Andersen and John Ringland aren’t Salisbury residents, but they enjoyed walking through the Leo Wallace Sr. House. Andersen, from Greensboro, and Ringland, from Hillsborough, are historic architecture enthusiasts and visited Salisbury on Sunday afternoon for the tour.

“The labor of love that the owners have put into this was amazing,” Andersen said. “I think that’s what made us fall in love with some of the details we saw in the house, simply because they did a lot of the work themselves.”

Like the Leo Wallace Sr. House, the Fulton-Mock-Blackmer House was also brought back from the brink. Built in 1820, the historic Fulton Street home suffered a devastating fire in 1984 and sat vacant for three decades, but it has since been revitalized and is currently home to the Dixon family.

Spencer Dixon and his sister Susannah Dixon, using a script written primarily by their mother, Beth, were part of the crew giving tours of their own home on Sunday afternoon.

Katie and Mike Jones, the wife and husband who own the Rock House, spent time Sunday afternoon checking out other homes on the tour while patrons visited theirs. The couple bought the Rock House three years ago and were excited to be a part of this year’s event.

“This whole weekend has been so fun,” Katie said.

Katie and Mike said they were thankful that the Historic Salisbury Foundation made it easy for them to open their home to the public.

A full list of the houses featured on this year’s OctoberTour with detailed historical information can be found online at octobertour.com.