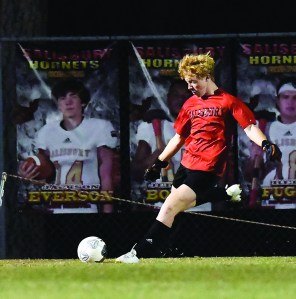 Salisbury’s boys soccer team clinched a tie for first place in the Central Carolina Conference with a 9-0 rout of South Davidson on Monday.

Senior Bennett Clark scored his first goal of the season.

Wade Robins and  Clark combined for the shutout in goal.

Next up for the Hornets is East Davidson Wednesday at Ludwig Stadium. Game time is 6 p.m.  The Hornets can clinch the conference championship outright.

Ashley Yang had 18 assists and eight digs for the Hornets (8-10). Ava Morris had 13 kills and six digs. Katie Peeler had 21 digs. Riley Peltz had five kills.