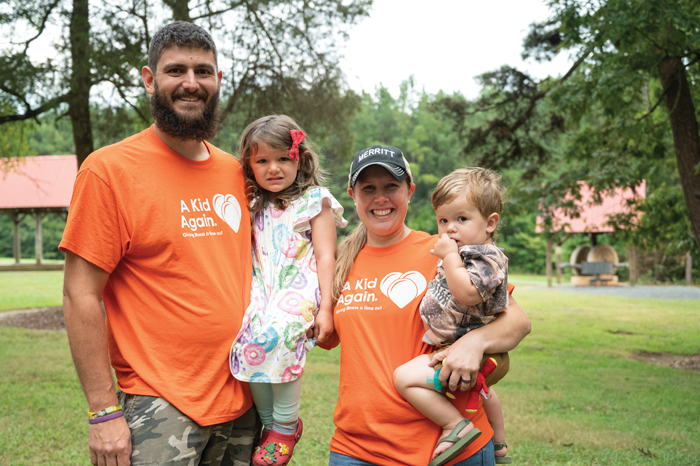 GOLD HILL — With a little help, Merritt Plummer is finding ways to be a kid again.

More than one year removed from the end of her cancer treatment, Merritt and her parents, Aaron and Kayla, are making up for lost time. Between COVID-19 and Merritt’s rhabdomyosarcoma diagnosis, there were times in the previous year when the Plummer family couldn’t do simple things such as invite people over to their Gold Hill-area home or eat at a restaurant together. They were buying hand sanitizer before it was a common COVID-19 protocol and offering it to friends and family when store supplies ran short.

“There was so much time for enjoyable stuff that was just lost during the past two years,” Aaron said.

So, Kayla didn’t mind too much when she chased Merritt around during a drizzle last week at the Gold Hill Mines Historic Park. The 4-year-old usually can be found outside, perhaps jumping on a trampoline. She also enjoys spending time with her family’s animals, including dogs, horses and chickens. During an interview last week, she was thinking about ways to add some goats to the family’s cadre of animals.

In the meantime, the Plummers have found new ways to spend time together with help from a Charlotte-based nonprofit.

A Kid Again opened its Carolinas chapter in March and serves families with children who have life-threatening conditions. So far, they’ve taken families, including the Plummers, on trips to Carowinds and a Carolina Panthers game. A trip to Lazy 5 Ranch is planned this month.

“The only downside to having a great adventure is that when the event is over, the hope can feel like it’s gone,” Paat said. “On a more regular basis, you keep a kind of feeling of hope and happiness.”

The group raises money through individual donations and corporate partners and provides its services to families for free. Its national office is in Columbus, Ohio.

Of at least 100 families A Kid Again hopes to reach in its first year, the Plummers were referred by a social worker at Levine Children’s Hospital. They’re looking forward to connecting with other families who have endured similar hardships as A Kid Again grows its local presence.

Those hardships started on Feb. 27, 2019, when the family received a call from Merritt’s babysitter. About 18 months old then, she was walking down a hallway when she stopped and started crying. Merritt’s diaper was red.

A urologist, Dr. Luis Perez, diagnosed Merritt with a prolapsed vagina and waived any fee for his services. An ultrasound found a mass behind her bladder. Later, that mass would be declared rhabdomyosarcoma, a 5-centimeter soft tissue tumor that was attached to her vaginal wall.

Merritt endured months of chemotherapy, including intravenous and oral treatments, as well as multiple surgeries. When COVID-19 came to North Carolina, visitor restrictions made the situation even more difficult.

“When COVID hit and no siblings were allowed in clinic, clinic days meant daddy spent the day with Merritt to get her chemo while mommy was at home to take care of newborn Eli,” Kayla said.

Today, Merritt’s ongoing treatment involves periodic scans and exams and the Plummers are focusing on ways they were blessed during Merritt’s chemotherapy, including friendly service from nurses and doctors at Levine Children’s Hospital. The nurses learned Merritt’s name, her favorite snacks and other facts about her. One year ago, the Plummers also were the subjects of Grace Lutheran Church’s annual fundraiser, which helped pay for Merritt’s medical expenses.

There are other people still struggling through worse situations, Aaron said.

“It’s all a matter of perspective,” Aaron said.

To learn more about A Kid Again, including volunteering or enrolling a child in its programming, visit akidagain.org/chapter/centralcarolinas.