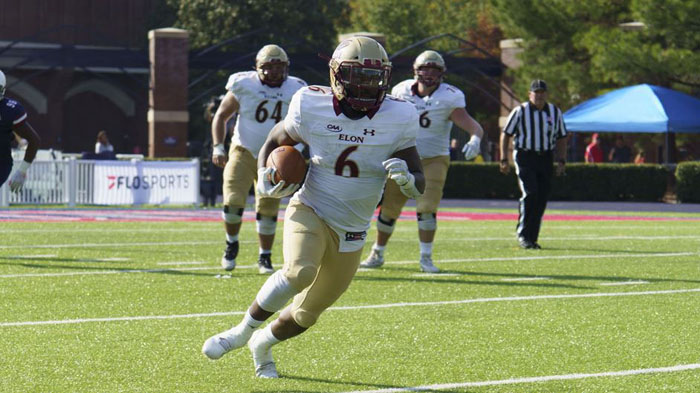 SYRACUSE, N.Y. —  A.T. Perry said he likely won’t sleep for a while and that’s understandable.

Perry had three touchdown receptions and his last, an acrobatic 22-yard catch in the left corner of the end zone, lifted No. 19 Wake Forest to a 40-37 overtime victory over Syracuse on Saturday.

“I knew I caught it,” said Perry, who also scored on pass plays covering 46 and 69 yards. “I just wanted to know if it was in bounds. After I caught it, I closed my eyes. I’ve looked forward my whole life to making a catch to win a game. I’m shaking. I won’t be able to sleep tonight.”

The triumph for Wake Forest (6-0, 4-0 Atlantic Coast Conference) gave the Demon Deacons their first 6-0 start since 1944.

Perry’s winning catch came while he was falling backwards and spinning to the turf.

“I’m small and I can twist and torque my body,” he said.

The win was just another step in the right direction for the Demon Deacons, who are aiming high.

“Nothing is done yet. Our goal is to win lots of games and be in a big, final game,” said quarterback Sam Hartman, who accounted for four touchdowns. In addition to his three scores to Perry, Hartman ran it in from the 1 for another. He was 19 of 32 for 330 yards passing.

“We’re proud to get the win, but we have a lot more goals than 6-0,” coach Dave Clawson said.

“One thing I’m really excited about is that we have a football team,” Syracuse coach Dino Babers said. “I’m disappointed about the loss. When you think about the ways we’ve played the last three games, they’re playing together, they’re staying together. It was one of the deals where we wish we had come out of this with a positive, but we’re looking forward to what we can do going down the stretch.”

A 38-yard field goal by Andre Szmyt gave Syracuse a 37-34 lead on the first possession of overtime, but the Demon Deacons scored six plays later.

Sean Tucker scored on a 28-yard pass and run from Garrett Shrader with 21 seconds to go in regulation to cap a 94-yard drive and tie the game at 34 after the Demon Deacons had taken a 34-27 lead just three minutes earlier on a 10-yard run by Christian Beal-Smith.

Syracuse was planning to go for a 2-point conversion to win the game but was penalized for delay of game. Instead, Szmyt’s extra point merely tied the game at 34.

“The biggest thing is there wasn’t a sense of urgency about what was going on out on the football field,” Babers said.. “There were certain cats who were taking their time and we needed to speed that thing up. It was disappointing. I didn’t want it to go to overtime. We wanted to win the doggone game.”

The loss spoiled a game effort by the Orange, who racked up 354 yards rushing, all but 23 of the total from Shrader and Tucker and the most in an ACC game since 2014. And Syracuse was without two starters on the offensive line and a third lineman was injured during the game.

Tucker scored three touchdowns and gained 153 yards, his fourth consecutive game with more than 100 yards rushing. Shrader, 15 of 27 passing, accounted for 178 yards on the ground and 160 passing.

The Orange held a 21-10 lead with 6:49 to go in the second quarter, but a decision to accept a holding penalty on third down when declining would have set up a 51-yard field goal attempt by Sciba seemed to turn the momentum. Wake converted on third-and-23 and scored a touchdown to trim the halftime lead to 21-17, the first of 16 straight points.

Wake Forest: The Demon Deacons were challenged throughout but made plays when they had to to stay perfect on the season.
Syracuse: The running of Tucker and Shrader will allow the Orange to hang with ranked teams. Shrader is getting more comfortable in the offense and the defense will help keep Syracuse in most games.

Wake Forest should maintain its Top 25 ranking and maybe move up a bit.

The Orange opted to kick a field goal on fourth-and-2 from the Wake Forest 27 midway through the fourth quarter and Szymt missed from 45 yards. Syracuse lost at Florida State on a field goal as time expired.

Wake Forest has a bye week before traveling to West Point to play Army on Oct. 23.

The Seminoles (2-4, 2-2 Atlantic Coast Conference) have won back-to-back games for the first time since 2019.

Travis ran for 121 yards on 14 carries and completed 11 of 13 passes for 145 yards. Two of his touchdown throws went to Ontaria Wilson and another to Malik McClain.

The Tar Heels (3-3, 2-3), who began the season in the Top 10, lost for the first time in four home outings despite two touchdown passes and 108 yards rushing from quarterback Sam Howell.

North Carolina coach Mack Brown fell to 0-11 vs. his alma mater (including 0-8 while in charge of the Tar Heels).

The Yellow Jackets (3-3, 2-2 Atlantic Coast Conference) got the ball with 1:42 left and no timeouts at their own 12-yard line. But Sims targeted Sanders for the two big plays on the go-ahead drive, first when he beat Jeremiah Lewis deep down the right side for a 37-yard gain.

Then came Sanders’ catch at the goal line despite Lewis committing a pass-interference penalty in a desperate attempt to break up the pass. Those were Sanders’ only catches of the game.

Duke (3-3, 0-2) had one more drive to respond and crossed midfield, but Juanyeh Thomas intercepted an overthrown ball from Gunnar Holmberg over the middle with 15 seconds left to seal this one.

Sims threw for 297 yards and three touchdowns with two interceptions for Georgia Tech.

Mataeo Durant handled a record-setting workload to lead the Blue Devils. He ran 43 times for 152 yards and a touchdown, breaking a program single-game mark for most carries that had stood for nearly 51 years. Holmberg threw for 292 yards and two touchdowns, but couldn’t complete a final drive.

Elon 33, Maine 23: Davis Cheek passed for three touchdowns and ran for a fourth to lead Elon to victory. After Cheek’s 1-yard touchdown run gave Elon (3-3, 2-1 Colonial) a 26-10 lead in the third quarter, Maine’s Trevin Ewing returned the ensuing kickoff 96-yards for a touchdown. The Black Bears (1-4, 0-3) cut it to 26-23 when Zavier Scott scored on an 8-yard run later in the third.

Tennessee Tech 27, N.C. Central 16: Willie Miller threw a touchdown pass and ran for another score to lead Tennessee Tech to its first win of the season. Aidan Raines blocked a punt to end North Carolina Central’s first series, and Miller ran into the end zone from the 1 on the next play.  Davius Richard completed 32 of 48 passes for 313 yards, and he threw a pair of touchdown passes in the fourth quarter for North Carolina Central (2-3).