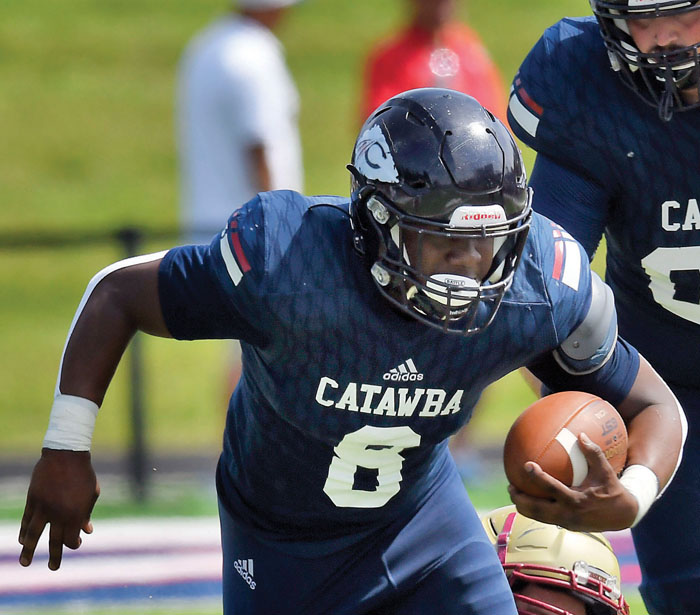 SALISBURY — A pointy ball bounces and rolls in mysterious ways, but there haven’t been many games more weird than the one played on Kirkland Field at Shuford Stadium on Saturday afternoon.

Allowing a special-teams touchdown makes you the loser in a football game roughly 70 percent of the time, but Catawba gave up three to Carson-Newman and still was the last team standing in a twisting, turning 33-27 struggle.

Carson-Newman’s DeQuan Dudley, a track and field sprinter, transported a pair of Catawba kickoffs to the house. Kickoff returns from the end zone automatically are recorded as 100-yard efforts, but Dudley was at least 2 yards deep in the end zone on his first one. Dudley piled up 291 yards on three kickoff returns and four punt returns.

Normally, Catawba kicker Clayton Crile’s kickoffs sail too deep to be returned, so the Indians may have relaxed a little on coverage.

“The strange thing is that those returns for touchdowns came when Clayton had the wind at his back,” Catawba head coach Curtis Walker said. “Those balls hung up in the air, and next thing you know their guy was running by us.”

Catawba (4-0, 1-0), which had sat out two straight weeks due to COVID protocols, defied the odds by winning the sun-splashed South Atlantic Conference contest.

Or maybe Carson-Newman defied the odds by losing it.

It hasn’t been going well for the exasperated Eagles. They have started 0-5 for the first time since 1959, when Dwight D. Eisenhower lived in the White House, a gallon of gas was 30 cents and family TV viewing meant  “Gunsmoke” and  “Wagon Train.”

“Now that was a crazy game,” said Catawba quarterback Ken Avent III, who threw the winning touchdown pass to Daniel Parker with 8:07 remaining. “They had really good returns, so we had to keep putting the ball in the end zone.”

Parker put three in the end zone for the Indians and ran for 127 yards. Jyrea Martin pounded out 94 yards on 27 workhorse carries. Avent was 15-for-28 passing for 161 yards. Brandon Thomas led Catawba receivers with four catches for 58 yards. John Oxce had a sack. Jeremiah Ferguson, Tylik Jones and Denoris Wardlow recovered fumbles.

Catawba crushed the Eagles on the stat sheet, 410 yards to 229 and 85 plays to 45, but Dudley’s rocket-man returns were an equalizer. Carson-Newman still had a reasonable chance to spoil Hall of Fame Weekend  until Catawba cornerback Jordan Gregg picked off a pass with two minutes left.

“It didn’t surprise me at all that Jordan made the play we needed,” Catawba head coach Curtis Walker said. “He came here as a walk-on and earned a scholarship for the first time this year. He keeps working and getting better every day.”

It began smoothly for Catawba, with the Indians chewing 70 methodical yards on 15 plays to get the fun started. Parker got the score from the 4, Crile kicked the point. Catawba led 7-0.

But 15 seconds later, Dudley was whooshing into the Catawba end zone, and it was 7-all.

Catawba moved the ball in the second quarter, but the Eagles limited the Indians to  a pair of Crile field goals for a 13-7 halftime lead.

Dudley exploded with the second-half kickoff, repeating his first-half thunder. Catawba couldn’t corral him, and Carson-Newman tacked on the PAT for a 14-13 edge.

Catawba had to punt — to Dudley — but Evan Rojas put a lick on him, Dudley fumbled, and Jones made a key recovery for the Indians at the Eagles 37.  Martin rushed for 15 yards before Parker broke loose from the 22 with 9:27 left in the third quarter. Catawba led 20-14.

Catawba didn’t blink, even after suffering its third special-teams disaster.

Crile backed the Eagles up to their 5-yard line with a hanging punt, and Catawba’s defense stuffed two running plays and blanketed a third-down pass.

That allowed the Indians to start a critical drove from midfield, and they cashed in. Avent moved them 50 yards in five plays. He was held to 33 net rushing yards on the day, but 10 of them came on his dash to the end zone on the first snap of the fourth quarter. Leading 26-21, the Indians tried for a 2-point conversion. That made sense, but it failed.

The lead changed hands again less than four minutes later. Carson-Newman scored its only offensive TD by pushing 53 yards. Now the Eagles led 27-26. They tried for a 2-point conversion but failed.

Catawba trailed for the third time but met the challenge, storming 75 yards on six plays.

It was a nerve-wracking drive. Avent got drilled out of bounds for a 15-yard penalty. Catawba also put the ball on the ground but was able to get it back.

Parker ran 12 yards for a first down at the Carson-Newman 19 before Avent threw the decisive touchdown to Parker on the next play. It appeared a scrambling Avent was going to take off, but he stopped short of the line of scrimmage and found Parker with 8:07 left to ply.

“I saw the defense biting on the run, so I just pulled up and tossed it to DP,” Avent said. “We had a pretty good day offensively. We could either run it or throw it.”

Catawba forced a Carson-Newman punt with six minutes left. Then the Indians were able to get a first down (Martin fought for 5 yards on third-and-4) and burned some clock.

Carson-Newman got the ball with 2:10 left, but Gregg’s interception halted the Eagles.

Carson-Newman used its timeouts and got one last stop, but the desperate Eagles crashed into Crile as he punted with 1:40 remaining. That flag for roughing the kicker meant a first down and secured Catawba’s hard-earned victory.

“We stalled some on offense in the second half and we’ve got a lot of work to do on special teams,” Walker said. “But we had a great finish. I appreciated the way our guys finished.”

Next for Catawba is a trip to Newberry.