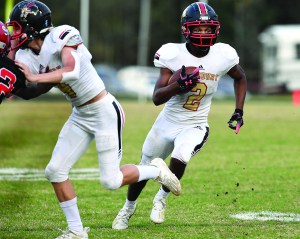 The Hornets had little trouble with East Davidson in a game moved up to Thursday night. Salisbury pulled away for a 49-0 Central Carolina Conference victory.

Salisbury scored on the ground to make it 42-0 with 6:29 left to play. The remainder of the game was played with a running clock.

When East Davidson opted to go for it on fourth-and-long late in the game, the Hornets (7-0, 4-0) registered a sack and took over at the East Davidson 11. Salisbury reserves punched in the final touchdown with 2:24 remaining.

Mike Geter was 12-for-17 passing for 178 yards and added 85 rushing yards on nine carries. He lost about half of a 94-yard touchdown romp because of a flag. He had a rushing TD and a passing TD and has now accounted for 27 touchdowns.

The biggest offensive play for the Hornets came early in the game when they faced a fourth-and-goal from the East Davidson 34 after a series of mishaps. With great protection, Geter calmly threw a strike to Deuce Walker in the end zone for a 6-0 lead.

A pitch play to JyMikaah Wells boosted the lead to 12-0, and Wade Robins kicked the first of his five PATs.

Salisbury executed late in the second quarter in its two-minute drill, mostly on Geter’s accurate passes over the middle, Salisbury scored on the ground with 29 seconds left in the half. After the Hornets added a 2-point conversion, it was 21-0 at halftime.

Salisbury returned the second-half kickoff to the East Davidson 45 and scored quickly for 28-0. Geter got the TD on a 6-yard run.

East Davidson had a determined drive that reached the Salisbury 37 as the third quarter closed, but Salisbury’s defense produced a fumble return rumble for a score to make it 35-0 on the first snap of the fourth quarter.

Salisbury’s defense added an interception and posted its fifth shutout of the season. East Davidson had been averaging more than 25 points per game with its physical running attack, but there were few running lanes and numerous tackles for loss by the Hornets.

Salisbury head coach Brian Hinson will be inducted into the Catawba Sports Hall of Fame tonight.

Salisbury plays at Lexington on Oct. 15 and wraps up the regular season at home against North Rowan on Oct. 29.