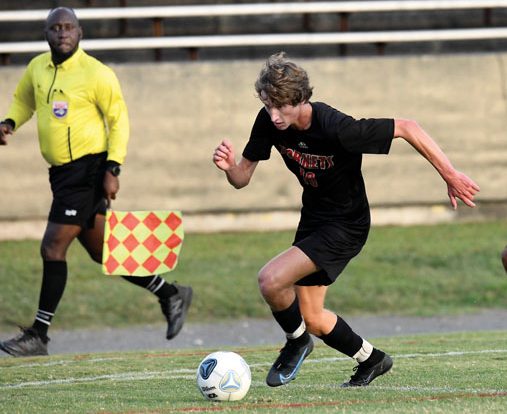 SALISBURY —  Salisbury’s soccer team rallied in the second half, edged West Davidson 5-4 and essentially wrapped up the Central Carolina Conference championship on Wednesday at Ludwig Stadium.

The Hornets lead the Green Dragons by two games and have three left to play.

“This was an insane game, just quite a crazy ordeal,” Salisbury head coach Matt Parrish said. “The defining game in our season to this point and our guys showed a lot of resolve.”

A 5-4 Salisbury-West Davidson game was the last thing anyone expected. When the teams scrapped in Tyro on Sept. 13, the Hornets’ margin of victory was 1-0 on a penalty kick after a moment of good fortune — a WD handball. But both teams knew West Davidson had the upper hand for stretches of that match.

Wednesday’s madness was wildly different from 1-0.

The Hornets were different without Yatti Avilez, a backline rock who was injured in Monday’s Thomasville game and is on crutches. Avilez’s absence meant a midfielder shifting to the back, so Salisbury was making adjustments at two levels of its defense.

“We were shaky early and West Davidson took full advantage, rammed it down our throats,” Parrish said. “They came at us fast and hard, hurt us on throw-ins and corners. They were dominant on set pieces.”

West Davidson scored on a corner 53 seconds into the match. The Hornets spent much of the half on their heels.

Will Webb scored the first of his three goals for the Hornets (13-1, 7-0) with Brayan Avilez, Yatti’s older brother, assisting for a 1-all tie. But then Avilez was hurt and joined his brother on the sidelines.

By halftime, Webb had been denied on a PK and the Hornets were down 3-1 and in serious trouble.

Parrish’s halftime speech was short on fire, but long on substance. There was no screaming. It was a calm talk about doing the things that have made Salisbury soccer successful over the years. He’s made this same speech more times than he can count. It almost always works.

“We spent the first half falling victim to just kicking the heck out of the ball and hoping Will (Webb) could run after it and do something with it,” Parrish said. “But we’re better than that. We’ve got the players, we’ve got the personnel to possess the ball and  to pick our spots. There was no easy fix against a team like West Davidson, but we slowly got back to doing what we do best. We pushed the ball. We connected. We built our attacks. We found our brain. We refocused, we regrouped and we played under control.”

Salisbury cut it to 3-2 with 35 minutes left by executing on a corner. Joseph Fernandez got the assist. Leonard Fragoso was right where he was supposed to be at the back post, and he finished.

That goal turned things around.

It was Webb to Donaldson for 3-all. Webb made the cross into the box, and Donaldson met it on the move and headed it home.

“The prettiest goal we’ve had all season,” Parrish said. “Just a fantastic goal.”

With 17 minutes left, right after the Hornets had cleared a West Davidson corner, Fragoso and Webb teamed up for the goal that put the Hornets ahead for the first time at 4-3.

But West Davidson wasn’t done. Just when the Hornets appeared to have all the momentum in the world, the Green Dragons (13-2, 4-2) took advantage of  brief  lapse and made it 4-all.

“We’ve made this absolutely monumental comeback, but then they score, and we’ve got to regroup all over again,” Parrish said. “Fortunately, we got back to doing what works for us.”

Webb delivered the decisive goal with two minutes left. Donaldson had the assist.

West Davidson had chances in the final minute, but the Hornets held on.

Isai Garcia scored his 21st goal for the Green Dragons and earned praise from Parrish as a very special player. Jesus Martinez had a hat trick for WD, racking up his 10th, 11th and 12th goals. Jayvian Wyatt had two assists.

Salisbury is ranked fifth in the 2A West by MaxPreps, while the Green Dragons are ranked 12th.

Next wave of NFL-ready QBs coming out of ACC