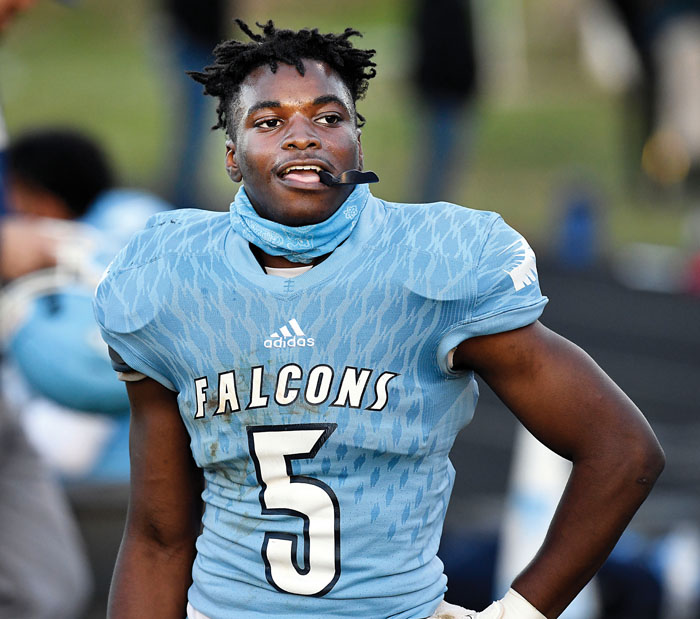 West's Nigel McManus picked up a fumble against Carson and ran it in for a touchdown. Photo by Wayne Hinshaw, for the Salisbury Post

MOUNT ULLA — West Rowan head coach Louis Kraft has a hard time picking out a defensive standout for his team, and that’s understandable.

All the parts of a successful defense have to mesh and flow together.

West carried out its defensive plan to perfection on Friday in a surprisingly easy 41-6 romp against Northwest Cabarrus, which throws the ball very well. One of the key components of West’s master plan was senior cornerback Nigel McManus, who like his fellow DBs always was matched up 1-on-1 with one of Northwest’s dynamic receivers.

“I always had No. 2 (Camden Barringer) or No. 3 (Tevin Tucker),” McManus said. “They had good receivers, but it wasn’t that hard. We were getting so much pressure on the quarterback that everything got easier. All they had time for was quick slants, and I was able to make one tackle for loss on a screen pass.”

In the language of football West played “Cover Zero” against the Trojans.  That’s man-to-man coverage everywhere, with no deep safety help. Anyone without a coverage responsibility was getting after the quarterback.

Tucker, who has been lighting everyone up, had three catches for 71 yards, with 45 on his lone big play. Barringer had two catches for 36 yards.

They’re both 6-foot-1, while McManus is listed at 5-foot-9, so he was giving up a lot of inches to the Trojans.

“We knew we’d be putting our DBs in uncomfortable spots, but pass rush was going to be the key to slowing down Northwest,” Kraft said. “Our guys responded. Nigel had a very strong game, and we all had a high level of confidence that he would. He’s a veteran with a lot of reps under his belt. It seems like he’s been around here for six years.”

McManus is a linebacker at heart, but he weighs 160 pounds. That makes him a cornerback for the Falcons.

He uses his toughness and quickness to jam receivers at the line of scrimmage. He makes an unusual amount of stops in the running game for a cornerback. In the Carson and South Rowan games, McManus frequently fought off the blocks of receivers and fearlessly assaulted running backs.

“My role is usually to contain and force plays back inside, but I like to think of myself as a hitter more than anything,” McManus said. “When one of the little guys makes a hit, it gets everyone hyped up.”

McManus also is a factor on special teams. He’s one of the guys flying down the field on West kickoffs. He’s also sure-handed enough to be the deep man on punt returns.

“Sometimes you know after just a couple of plays how a night is going to go,” Kraft said. “Nigel made a hit for a loss early against South Rowan, and it gave everyone a feeling that it was going to be a very good night. We also got a fast start against Northwest. They fumble the kickoff, we get it, and we score. They go three-and-out, they punt and Nigel comes up to return it, and we score again. We’re playing with confidence. It’s rising every week and we’re getting better every week.”

West is off this week. A game at Monroe had been scheduled, but Monroe has been dealing with COVID issues, and the Falcons weren’t going to risk jeopardizing their season in a non-conference game. Their focus is on winning the South Piedmont Conference. It’s been 10 years since West (4-2, 3-0) won a conference title.

The West community remembers the night the Falcons clinched that last conference title on Oct. 28, 2011.  Head coach Scott Young was watching from the the press box at West Iredell, four days after suffering a heart attack, the beginning of his health struggles. while assistant Joe Nixon was guiding the Falcons on the field. Kraft played tight end for that team.

Young would die at 46 in 2017 after complications from a heart transplant. He would have turned 50 this season.

“A lot of us haven’t forgotten that night 10 years ago,” Kraft said. “That’s one of the reasons we’re chasing this conference championship so hard.”

With a great seed, who knows what might happen for the Falcons. 3A appears to be wide open. The Falcons are ranked 12th in the 3A West this week by MaxPreps.

Assistant coach Joe Robinson is referred to as “Bobby Brackets” by Kraft. He keeps constant tabs on potential future opponents for the Falcons, but first they have business to take care of.

If they do take care of it, McManus will be a big reason.