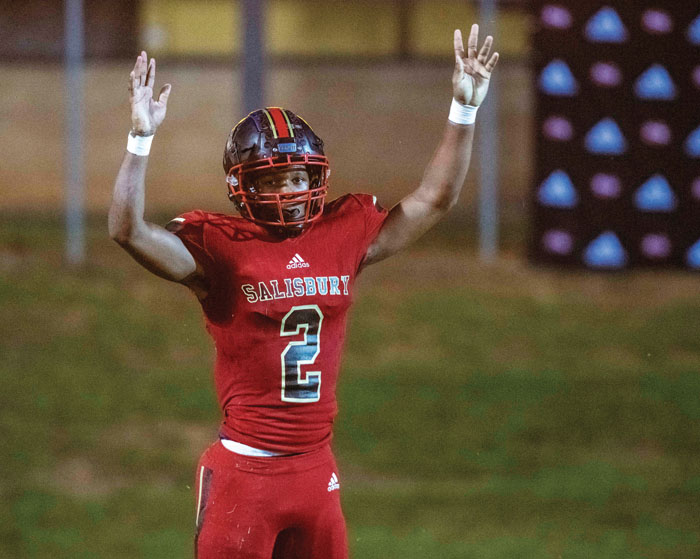 SALISBURY — This will be one of the quieter October Fridays in the history of Rowan County football.

There are no Rowan home games. Not one. That’s highly unusual.

Adding to the silence, North Rowan and West Rowan are off this week.

This was West’s open date when the season began. Then the Falcons had scheduled a road trip to always talented Monroe to replace the Salisbury game that wasn’t played on opening night.

But West-Monroe didn’t happen. Monroe has experienced COVID issues, and it wasn’t worth the risk for a non-conference game. Not with the Falcons tied for first in the South Piedmont Conference. West returns to action on Oct. 15 at home against Central Cabarrus, and if the Falcons can take care of that one, the trip to Concord, also undefeated in the SPC, will be a huge one on Oct. 22.

For North, the open week comes at an ideal time, following a physical, two-overtime win at East Davidson.

North will return to action for what should be routine Central Carolina Conference victories against West Davidson and Lexington before the Cavaliers tangle with Salisbury in a regular-season finale.

Salisbury is on the road Friday. So are East Rowan, South Rowan and Carson.

Even on the road, the Hornets are favored by 36 against an East Davidson team that is pretty good. That tells you something about the Hornets.

East, South and Carson have a combined 2-15 record, so that trio isn’t going to be favored on the road.

Of the three, Carson has the best shot this week. The Cougars play at Northwest Cabarrus in this week’s WSAT  and WEGO  game of the week.

The Massey Ratings give East an 8 percent chance to surprise Central Cabarrus. South is a three-TD underdog at Concord.

Carson is given a 37 percent chance of winning at Northwest Cabarrus, which ran headlong into a West Rowan buzz saw last week.

The good news for fans of East, South and Carson is that their matchups with each other still lie ahead. Someone is going to win those.

All three could really use a confidence-building victory right now.

Carson hasn’t won since it kicked around South Stanly on Sept. 3.

South hasn’t won since its opener against Parkland on Aug. 20.

A.L. Brown has dropped three league games in a row for the first time since the 1970s, but is favored this week at home against West Cabarrus, which played a Tuesday makeup game at South Iredell.

After two crushing, blowout losses, Davie looks to regroup and will seek a road win at Mount Tabor, but the Spartans who won a state championship in the 3A ranks last spring. They’re another quality Central Piedmont Conference opponent.

East Davidson took North Rowan to two overtimes last week, so the Golden Eagles probably are better than they’ve been given credit for.

But East Davidson’s power running game — the Golden Eagles are 99 percent run —  isn’t likely to succeed against a Salisbury defense that has monsters in the trenches.

Meanwhile, Salisbury’s offense isn’t going to be held under 40, and the Hornets also can score suddenly on defense and special teams.

Salisbury sophomore QB Mike Geter has been dynamic, to say the least, accounting for 25 touchdowns — 11 passing and 14 rushing. With his combination of quickness and arm strength, he’s got a chance to be one of the all-time guys for the Hornets.

JyMikaah Wells is a steamroller and has racked up 11 rushing TDs. Marcus Cook has six TD catches.

As far as the defense, well … you know about the defense. It will not be easy to shut out East Davidson, but don’t expect the Golden Eagles to score more than once.

East Davidson beat Salisbury as recently as 2016, but the Hornets have won the last three meetings, including a 61-0 annihilation in 2019.

Salisbury head coach Brian Hinson is being inducted into the Catawba Sports Hall of Fame on Friday.

Northwest Cabarrus is primarily a throwing team and has exceptional athletes at wideout, so Carson’s pass rush and pass defense will be tested.

Carson may be able to move the ball on the ground against the Trojans. West Rowan certainly did last week.

QB Hunter Burris has accounted for a high percentage of Carson’s offense. He has 450 rushing yards.

The Cougars also would like to get receiver Jay Howard involved more. Howard’s three catches have produced 114 yards.

Northwest has won seven of the 10 meetings and demolished Carson 49-0 in 2019. Carson’s most recent victory in the series came in 2015.

East has had two weeks to get ready for the Vikings, who looked pretty good in beating South Rowan last week.

The Central-South final was 29-12, but the Vikings led 29-0 at one point. They displayed a productive passing game and a competent defense.

To this point, East hasn’t been able to get much going offensively with an offense built around short, quick passes. That’s put a lot of pressure on the defense.

Concord has been the South Piedmont Conference’s surprise team. The Spiders were supposed to be down, but they’ve used a strong option running game and a sound defense (former Salisbury head coach Ryan Crowder is defensive coordinator) to become contenders for the league title.

Concord piles up huge rushing yards, so the task for South Rowan’s defense is to slow down the run and force the Spiders to throw it some.

South’s offense has been inconsistent, but the Raiders have several talented skill players. Backup QB Audric Coe provided a spark last week after he entered the game in the fourth quarter.

South has to cut down the penalties. There were some killer ones last week against Central Cabarrus.

Davie is an underdog on the road against a Mount Tabor team that went 11-0 last spring and won a title. The Massey Ratings give Davie a 45 percent chance of winning in what should be a terrific game.

Davie is ranked 34th in the state by MaxPreps, while Mount Tabor is ranked 36th.

Both teams got their Central Piedmont Conference win against R.J. Reynolds. Mount Tabor has lost in the league to 19th-ranked West Forsyth, while Davie was pounded by sixth-ranked East Forsyth and 13th-ranked Reagan.

Mount Tabor was sidelined by COVID last week, so keep an eye on that.

Davie’s most recent encounter with the Spartans was a 35-14 win in 2016. Mount Tabor’s most recent triumph over the War Eagles was in 2014.

A.L. Brown is favored to win a homecoming game that is expected to be defensive-minded.

West Cabarrus played on Tuesday of this week (a 21-17 loss to South Iredell), so that has to be an enormous advantage for the Wonders, who are given a 74 percent win probability by the Massey Ratings.

Both teams have been better defensively than offensively. A.L. Brown has scored a total of 30 points in its three South Piedmont Conference losses.

A.L. Brown smashed the Wolverines 47-0 in the spring.