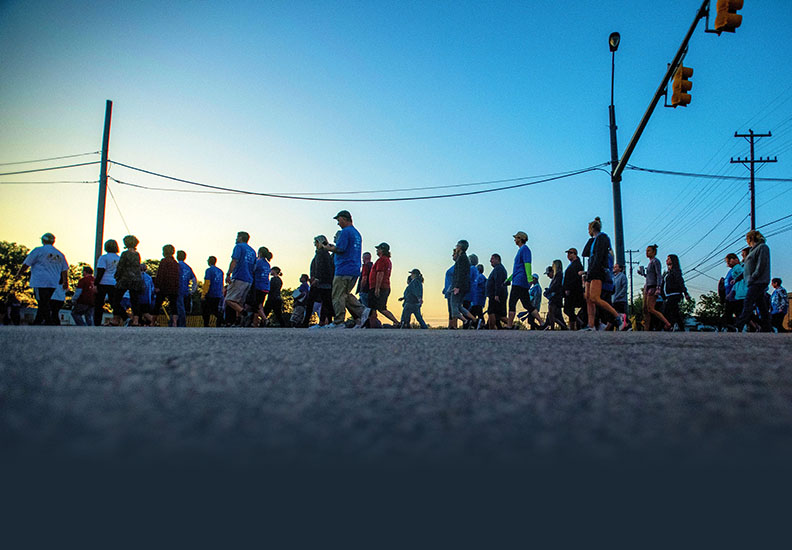 SALISBURY — As the sun rises on Saturday morning, people strolling side by side will walk into the light at Shuford Football Stadium at Catawba College.

The Rowan County United Way is teaming up with Innospec to host this year’s Into The Light Walk from 6:30-8:30 a.m. The goal of the walk is to bring mental health and suicide out of the darkness by promoting healthy conversations and awareness.

“It’s something that’s in the past been stigmatized and people don’t want to speak up about it,” said Jim Behmer, chair of this year’s United Way fundraising campaign. “This is an event where that’s what the focus is: people feeling comfortable going and sharing or even just being around people who are dealing with things they’ve been dealing with.”

This is the third year of the walk, which coincides with National Mental Illness Awareness Week. The event was previously held in downtown Salisbury, but Behmer said the move to Catawba College will allow for better social distancing in a controlled environment. After walking a few laps around the track while the sun edges over the horizon, participants will gather in the bleachers to listen to several speakers.

Behmer is on the event’s planning committee and has a special appreciation for the event.

“Suicide has impacted my family, so I’m all about being with people who have gone through similar events and how we can prevent possibly losing someone else,” Behmer said.

Organizers this year have placed an emphasis on ensuring mental health resources are available before, during and after the walk.

“There’s going to be a lot of resources there, a lot of agencies are going to be there to help folks,” Behmer said. “A lot of these (walkers) are survivors or they’re family members of people who may have attempted or actually did commit suicide. People need to talk to each other and find resources to help.”

While Rowan County saw a slight decrease in suicide rates from 2019-21 during the COVID-19 pandemic, from 27 in 2018 to 17 in 2019, there was an increase in calls to suicide prevention hotlines, and diagnoses of anxiety and depression, based on mental health data.

Rowan County Public Health provides mental health education through its “Q.P.R” training, which stands for “Question, Persuade, and Refer.” Similar to CRP, QPR is an emergency response to someone in crisis and can save lives. The training dispels the misconception that talking about suicide will encourage someone to take action. Instead, the training encourages people to connect with an individual struggling with mental health and ask the question: “Are you considering suicide?”

The Into The Light Walk is also part of the Rowan County United Way’s ongoing fundraising campaign. Rowan United Way is aiming to raise $1.5 million that will be dispersed among its 19 community investment partners. Five of those partners are dedicated to directly addressing mental health in the Rowan County community. All proceeds from the Into The Light Walk are used to support those mental programs.

Participants can sign up for the walk for $25 by midnight on Friday at runsignup.com/into-the-light or by calling the Rowan County United Way office at 704-633-1802. Participants can also sign up on the day of the race at 6 a.m. for $30. There is no charge for children 5 and under. Each registrant will receive a shirt and bracelet.

The Into The Light Walk will be early enough in the day that it will not interfere with Catawba’s home showdown against Carson-Newman scheduled for 1 p.m.

More information about the walk can be found online at rowanunitedway.org.