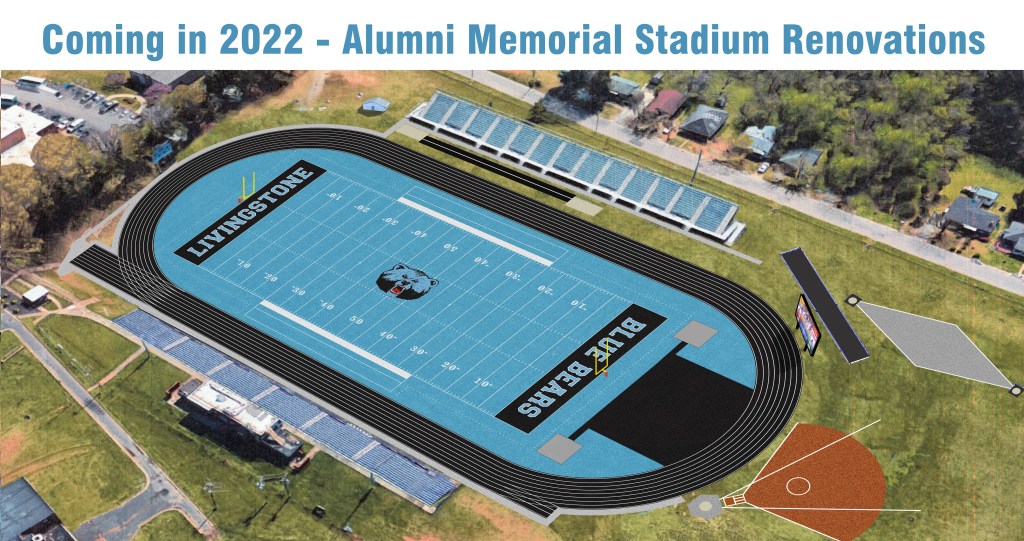 A rendering of the renovated field.

SALISBURY — Livingstone College is expecting to break ground on its major football stadium renovations this month.

Livingstone Athletic Director Lamonte Massie-Sampson said the college is working on travel plans for everyone involved for a ceremony in mid-October. The college is waiting on final permitting before trucks will begin excavating the stadium area.

The project will be a 75-day build that will overhaul the track and field completely, add a video scoreboard and a practice area outside the stadium. The field will be converted from grass to synthetic turf in Livingstone blue. The renovation will include a practice facility outside the stadium for softball batting and running bases as well as other programs, but it will not be a full softball field.

“Some of those things will be installed simultaneously,” Massie-Sampson said.

The base of the track will be laid in the initial construction window, but Massie-Sampson said it is unlikely the track will be able to be surfaced until temperatures begin to rise in early April. The surface needs a few weeks of warm weather to cure properly.

The $2.8 million project is a partnership with the Willie Lanier HBCU Field of Dreams program, which partners to provide financial support to historically Black colleges and universities for their athletic facilities. The program is managed by the nonprofit Honey Bear Project, which works to get athletic facilities at HBCUs up to competitive levels by providing turf fields at little-to-no cost to the partner institutions. There are several other North Carolina HBCUs participating in the program as well.

The football and cross country teams will practice off campus during the construction. Massie-Sampson said the college is organizing transportation right now and will have to handle other logistics. On site, the football team needs lights, for example.

“It’s going to be an inconvenience right now, but the finished project will allow the football and track programs to show we are serious about our athletic programs,” Massie-Sampson said, noting the college is renovating locker rooms at the same time and working on resurfacing its tennis courts.

Massie-Sampson said the new facility will put the college in a more competitive position and provide better surfaces for its athletes to train.

“It is a big feather in our cap when we bring a student to the campus,” Massie Sampson said.

Football and track staff are excited about the project enhancing the programs. Head football coach Sean Gilbert said the new field will be a resource for all students and a way for Livingstone to enhance its enrollment and community relations.

Editor’s note: A previous version of this story incorrectly stated the estimated cost of the project. We apologize for the error.