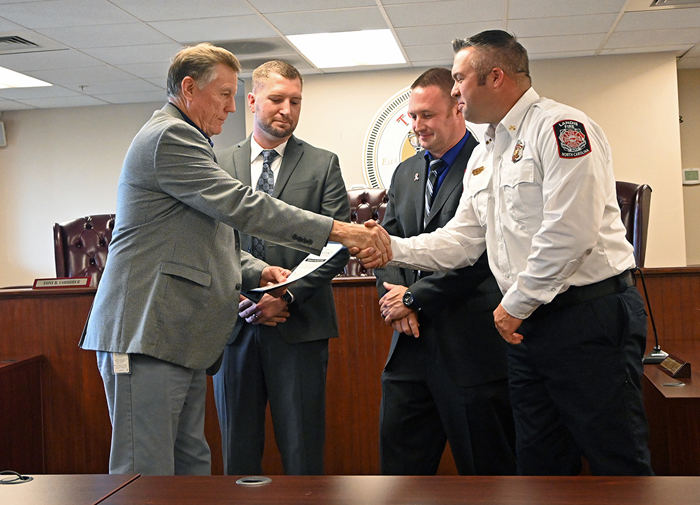 Natalie Anderson/Salisbury Post — North Carolina Insurance Commissioner Mike Causey presented Public Safety Director Zachary Lechette, Assistant Director Kevin Young and Captain Charles Sheeks on Monday with certficates showing an improved fire ISO rating for both Landis and East Landis Fire Department. East Landis comrpises the rural, unincorporated areas of the county outside of the town's limits and withing the extraterritorial jurisdiction. Both now have ratings of 2, whic is up from a rating of 4 determined five years ago.

That’s down from a score of four received in 2010, the last time the town received an inspection and ISO rating. The ISO rating scale goes from one to 10, with one being the best. A rating of 10 means the department is not recognized as certified.

“You all have worked hard to get your ISO class ratings improved and it’s paid off because you’re going the ranks of some elite fire departments in North Carolina,” Causey said.

He added the new rating will help the town in recruiting businesses and other economic development because decreased ratings result in lower fire insurance costs.

The inspection was conducted on June 8 by Jeremy Hunt, who’s one of eight rating inspectors employed by the state. Public Safety Director Zachary Lechette told a board room full of firefighters and residents Monday that on the morning of the inspection Hunt witnessed officers responding to a car chase that ended in an arrest. The crowd laughed.

In addition to the inspection, ratings are determined by reviewing the last three years’ worth of records like training, response times and equipment stock. Lechette said all fire personnel who are members of the department contributed to the rating, even if they were in training and not yet certified.

“It’s very inspiring to see the amount of effort that goes into these rating classes,” Causey said. “It’s not something you can do in a day or two. It’s a long-term effort and it’s an effort that involves the entire community in addition to surrounding departments. To get to this level, it’s a very high bar and it shows a very high level of professionalism.”

Lechette said the rating shows the department’s capability when it comes equipment, water supply, interaction and its overall performance and response times. Throughout the pandemic, Lechette has worked with the town to transform the fire and police departments’ operations into a combined Public Safety Department. He praised the firefighters and law enforcement officers for not only maintaining services throughout the pandemic, but also increasing them. Among the new services are drug take-back boxes, safe exchange zones and car seat inspections and installations.

“This shows the forward progress of the town of Landis and that we’re constantly improving,” Lechette said. “It’s a testament to the men and women of the department. I can’t thank them enough for all their hard work and dedication.”

Mayor Meredith Smith said the new rating should serve as an incentive for “people to come and work in Landis.”

“To have an ISO rating of 2, that’s a big deal,” Smith said. “And I hope that our citizens understand what it means for our fire department and how far they have come in such a short time.”

The new rating will become effective in January. The Landis Fire Department currently employs 24 firefighters, with nine of those working full-time.