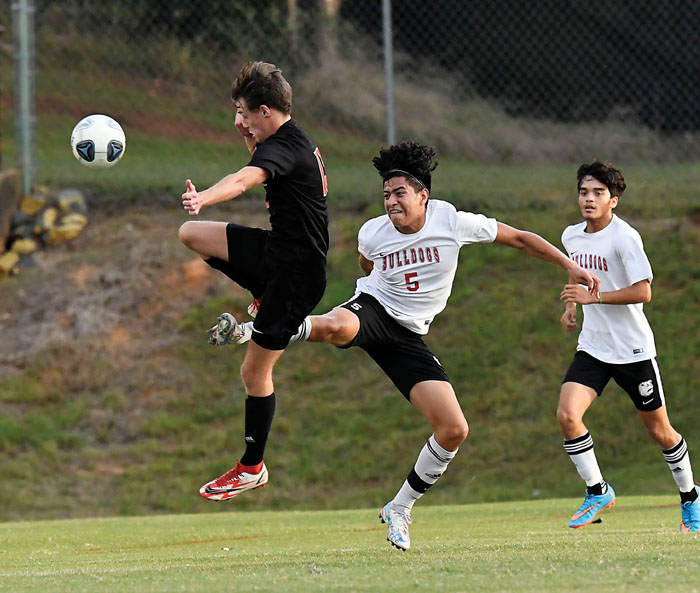 After 10 seniors were recognized at halftime, Colin Donaldson sent a weighted ball to fellow wing Will Webb to make it 2-0.

Bennett Clark scored his first goal of the season on a penalty kick to push the lead to 3-0.

Wade Robins secured the shutout in goal, helped in large part by the spectacular defense of Jack Heilig.

Up next for the Hornets is the biggest match of the season, a home rematch with West Davidson on Wednesday at 6 p.m.

Salisbury won 1-0 in the first meeting in Tyro.

Over the course of the past three-plus seasons, the senior class has compiled a 61-14-4 record (79.7 winning percentage). Salisbury has gone 38-8-4 in the CCC and 6-3 in state playoff games.

Javon Hargrave (North Rowan) had another sack and was in on six tackles in Philadelphia’s loss to Kansas City.

Hargrave has 24 tackles, including five sacks, and one forced fumble in four games. He’s off to one of the most impactful starts by an NFL defensive tackle in this century.

Next for Hargrave is a game against the Carolina Panthers in Charlotte.

Crue Seager, Kyle’s son, threw out the first pitch for the last Seattle Mariners game of the season, and Kyle was given the third base that was used in the game as a keepsake.

Seager, who played at Northwest Cabarrus and for the Kannapolis American Legion team, has played 11 seasons for the Mariners, but probably will be on a new team next season. Seattle has an option to retain him for the 2022 season but is unlikely to use it.

The third baseman, who turns 34 next month, shouldn’t have any trouble securing a contract with a new club after hitting 35 homers and driving in 101 runs this season.

He’s been an All-Star and a Gold Glove winner. He’s third in the history of the Seattle franchise in doubles and fourth in games played, hits, homers and RBIs.

Chance Mako (East Rowan) pitched six no-hit innings for the South Charlotte Panthers on Sunday in a win against a Florida team.

Mako, a junior committed to N.C. State, struck out 16 and didn’t walk a batter. The only baserunner he allowed was on a hit batsman.

Padgett had two RBIs in a 10-0 romp by the SC Panthers.

Haiden Leffew (South Rowan) pitched into the sixth inning on Sunday for the SC Panthers in a 3-1 win. Leffew struck out eight.

Former Team USA sprinter Ernest Wiggins (South Rowan) has been named to the Florida Sports Board and recently met with Governor Ron DeSantis.

Wiggins is a trainer, business owner and motivational speaker in the Orlando area. He’s a member of the NCAA and Appalachian State halls of fame.

Carson at Northwest Cabarrus is the radio game of the week for WSAT and WEGO.

West Rowan had scheduled a road game with Monroe for Friday, but that game won’t be played now.

Monroe was unable to play Anson County last week due to COVID, and the Monroe-Anson game was rescheduled for tonight.

Hannah Wilkerson was the player of the match for the Cavaliers.

Carson lost at Grimsley on Monday in three sets.

Rebecca Reilly and Lindsey Whisnant won in singles for the Mustangs and teamed for a doubles win.

The Rowan County Championships are set for Thursday at Dan Nicholas Park.

The Rowan County Championships are set for 1 p.m. at Corbin Hills on Oct. 11.

Pam Carver had longest putt, while Cameron Snow had closest to the pin.

Sean Incardona (East Rowan) was the second runner for Lenoir-Rhyne in the Queen City Invite. He ran 26:06 on an 8K course.

Katie Knorr (Salisbury) won the 200 backstroke as UNC Wilmington opened the season with a win against Army.

Braelyn Faust (West Rowan) had four kills and four blocks in a sweep of UVa Wise.

Charlotte plays on Friday this week at 7 p.m. against Florida International.

Twyun Rivens (Salisbury) made seven tackles for Campbell in a 48-31 win against North Alabama.

Jabril Norman (Salisbury) made seven tackles and was in on three tackles for loss for Mars Hill as the Lions beat Carson-Newman in overtime.

COLLEGE CROSS COUNTRY
The Catawba’s men’s and women’s cross country teams traveled to Florida an had fifth-place finishes out of 10 teams at the Division II Pre-National Invite.

Raina Andrews was the top finisher for the Catawba women, placing 10th. She covered a 6k course in a time of 22:44, two seconds shy of the school record. Madison Lowery (South Rowan) was 20th in 23:18.

Matthew Fowler led the Catawba men with a ninth-place finish, clocking a 25:22 over an 8k course. Erick Ramirez-Ramos took 15th in a time of 25:55.

Catawba competes Friday at the Royals Challenge at McAlpine Park in Charlotte.

Catawba travels to Lenoir-Rhyne on Wednesday to face the Bears at 5 p.m.

Catawba romped 8-0 against Coker on Saturday at the Frock Soccer Complex.

It was the most goals scored in a game by Catawba since 2009.

Lillie Rusher (Salisbury) scored her first college goal and also had an assist.

Catawba travels to Lenoir-Rhyne on Wednesday for at 7:30 p.m. match.

Salisbury Academy had lost to 6-3 to Country Day in the first meeting, but avenged that loss.

In doubles, Wymbs/Williams won 8-4, the Antosek cousins won 8-2 and and Goodman and Aron won 8-4.

“How this team responded to their previous defeat with this win shows the heart and soul of these girls,” coach Bryan Wymbs said.

Girls on the Run of the Greater Piedmont will host a 5K event on Sunday, Nov. 14, at Salisbury Community Park.

Participation is open to community runners and all proceeds from the event benefit Girls on the Run of the Greater Piedmont. Registration cost is $30 to public runners and includes an event shirt, chip timing, awards for first, second and third overall male/female and a family-friendly atmosphere.

Community runners will race at 1:30 p.m. followed by a mile fun run at 1:45 p.m., with the stars of the show, the Girls on the Run girls, their running buddies and coaches, heading out at 2 p.m. For information on how to register and volunteer opportunities visit: RunSignup.com and under “find a race” — Girls on the Run of the Greater Piedmont 5K.