Pet owners let the dogs out for Salisbury’s Woofstock 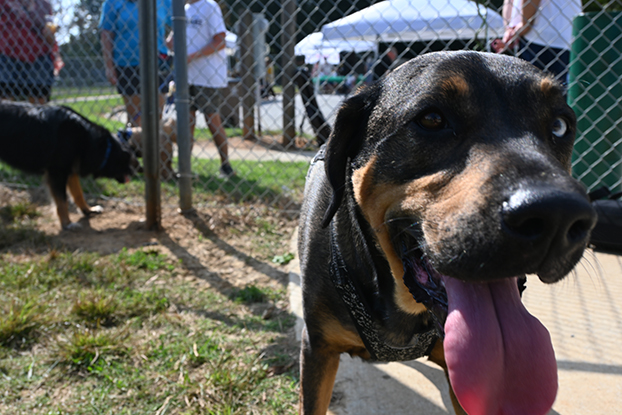 The Woofstock festival, which first began in 2017, raises money for the Pitner Dog Park, located behind the Salisbury Civic Center on Martin Luther King Jr. Avenue.

Event coordinator Alyssa Sides said Woofstock’s proceeds will be put toward adding trees, benches and toys to the park. Though the first event was held in 2017, this year’s event was the first one that featured vendors, food, beer and music. All vendors’ registration fees were donations. Sides estimates thousands have been raised to date, with at least $500 coming from Sunday’s event.

“What you’re doing is trying to do is promote socialization between the dogs and between people in a safe, open environment,” Sides said. “So we wanted to do this festival, especially in the midst of what’s going on, to bring people back out and let them know.”

Salisbury resident Sharon Earnhardt recalls attending Woofstock fundraisers before the park opened in 2019. Her dog, Puck, was a 100-pound Borzoi who was the biggest one in attendance each year. Puck has since passed, but 9-month-old Hannibal enjoyed a sunny Sunday at the dog park alongside Poppy, a female Borzoi.

“It’s great having a fenced-in area where you can bring dogs and let them socialize with others and let them play in a controlled atmosphere,” Earnhardt said.

Poppy’s owner and Salisbury resident Jeannie Ramsey said events like the annual Woofstock allow the opportunity to encourage adopting pets from shelters rather than purchasing from breeders. She added that professionally bred dogs typically have homes, but when someone decides to breed their dogs with a neighbor, for example, there may be a litter of 10 puppies that don’t have homes.

“It’s important for events like this because not enough people spay and neuter their pets,” Ramsey said. “I think when you do events like this, it helps bring notice to that sort of thing.”

Tracey Kyles, owner of the professional dog walking and sitting business Soul Mutts, said Woofstock helps bring awareness to the various services available for pet owners. She would like to see the more dog-friendly atmospheres experienced in Charlotte and Kannapolis “trickle to Salisbury.”

“I really like to see that trickle to Salisbury. And the more it does, the more pet-friendly businesses that will come and help us grow locally,” she said. “I think the pet industry is booming so people really want to do something with their pets. So I think events like this are excellent to bring pet owners together as well as pet businesses that may not be aware of each other.”

Sides said she aspires to see the annual Woofstock event become a larger community event. She said the Parks and Recreation Department is currently working to have pet owners register their pets for free and obtain a card to swipe during each visit to the park in an effort to better track the volume. Additionally, future safety measures will include requiring dogs to be up-to-date on their vaccinations prior to visiting the park.

“Generally when you come out here there are dogs here,” Sides said. “So we know that it’s steady. We just need to spread awareness that it’s here.”

While a handful of local dogs roamed around, Theresa Pitner, president of the nonprofit organization Dog Parks and Walks, talked with pet owners about what their dogs’ behavior and temperament indicated about their energy and level of contentment. Pitner operates Understanding Your Dog training center on East Council Street.

The Pineapple Plug was set up to offer wings, fries, chicken bowls, hotdogs and vegetarian options, while The Buzzed Viking Brewing Company provided beer. Other vendors at Woodstock featured dog grooming services, dog training and homemade crafts, such as Small Animal Medicine and Surgery and Soul Mutts. Pet lovers could also donate money and participate in raffle prizes for their furry friends.

Additionally, Tracy Crotts of PAWS led dogs through agility courses and instructed them to do various tricks. One spirited Chinese Crested dog named Sugar put on a show and did not shy away from the crowd of people he attracted to the course.

Paint shortages will likely push back inaugural ‘Paint the…