Man of many talents, Garland “Mickey” Chambers has lived a life full of art, adventure and advocacy 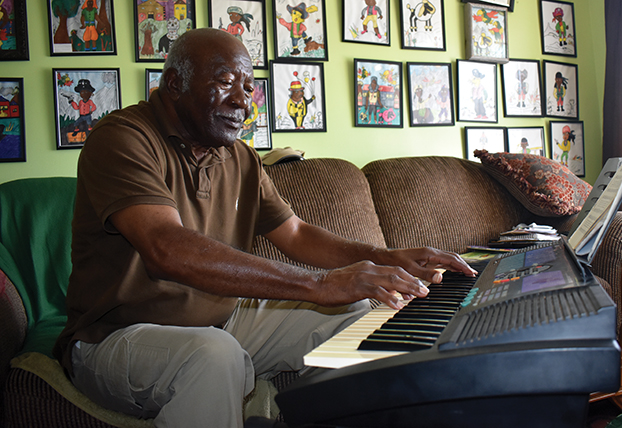 A man of many talents, Garland Chambers has led an adventurous life full of golf, music, art and advocacy. After a frightening and lengthy bout with COVID-19, the 83-year-old continues to pursue his passions and tell the stories he's picked up along the way. Ben Stansell/Salisbury Post

SALISBURY — As the initial wave of COVID-19 gripped New York City in the spring of 2020, Garland Chambers spent 71 days in the hospital with the virus.

Chambers, 83, discovered the sickness the same way many Americans did — when his smell disappeared and his taste for food became nonexistent. Shortness of breath eventually led him to call his daughter-in-law, who ordered an ambulance to pick him up from his Bronx residence.

In a large hospital during the early stages of the pandemic, Chambers had a unique perspective of the toll it took.

“I watched more body bags than you could shake a stick at,” Chambers said.

No one wants to spend two months in a hospital, battling a virus the entire world is trying to understand and wrangle, but Chambers said his extended hospital stay wasn’t as harrowing as it could’ve been.

“It’s according on where the virus hits you,” Chambers said. “When people get it in your heart or something like that, it’s going to kill you. If I got it anywhere other than where I got it, I probably would not be here now.”

The life-threatening experience is now another interesting, albeit traumatic, story for Chambers to tell. And there are plenty of them. From golfing with a U.S. president to advocating for workers rights for one of the country’s largest labor unions, Chambers has led an adventurous and accomplished life.

Not bad for a “country boy” from Rowan County.

Born in Salisbury in 1938, Chambers was immediately given the nickname “Mickey” by his father. As a child, Chambers found himself caddying for female players at Brookdale Country Club, where the Salisbury VA Hospital now stands.

When Chambers was a teenager, he made the move to caddying for men at the Salisbury Country Club. Although the days were long and arduous — Chambers is quick to point out “there wasn’t no such thing as a golf cart” — he could always look forward to Mondays.

“We got to play golf on Mondays — caddy’s day,” Chambers said. “We played all day long.”

Chambers loved golf and was good at it too, but it wasn’t his only athletic pursuit.

“I used to play all the sports and I was just as good at one as I was the other,” Chambers said.

As a student at the historic Price High School, located just a stone’s throw from the yellow house where he now lives part-time, Chambers struck fear in opposing offenses as a defensive end.

Chambers went on to play football at Livingstone. On a trip for a gridiron showdown against a college in Savannah, Georgia, Chambers had the unexpected opportunity to show off his golf skills in front of President Dwight E. Eisenhower, who happened to be visiting on the same weekend.

Eisenhower’s legacy may be his military prowess, advocacy for the interstate highway system and leading America in the wake of World War II, but he’s also credited with bringing golf to the White House.

“He was a fiend for golf,” Chambers said.

The nine holes Chambers played with Eisenhower might be the most significant golf he’s played in his life, but there’s been many other important rounds. In his professional career as a district manager representing thousands of workers for the International Ladies’ Garment Workers’ Union, Chamber often found himself talking shop in between strokes. 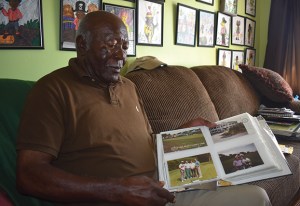 Garland Chambers has played plenty of golf in his life. In addition to playing with top clothing manufacturing company executives, Chambers once played nine holes with President Dwight Eisenhower. Chambers keeps a picture book of his triumphs on the course. Ben Stansell/Salisbury Post

Chambers first started working for the union shortly after he moved to New York City in 1965. He visited his older sisters in the Big Apple almost every summer when he was growing up, but moving there as a 25-year-old was a much different experience.

“I was a country boy when I left here,” Chambers said. “I didn’t know nothing about nothing. You learn fast.”

The first job Chambers landed in New York was at a women’s clothing factory. He hadn’t worked there long before he was offered a job as a business agent for the ILGWU. The union, which merged with another in the 1990s to form the Union of Needletrades, Industrial and Textile Employees, was a major player in the industry throughout the 1900s.

Chambers worked his way up in the union and eventually earned the role of district manager, representing thousands of workers in shipping departments in the New York area. Chambers enjoyed his role with the ILGWU, primarily because it allowed him to meet and make friends with people.

“You’d get to meet everybody, go everywhere,” Chambers said.

It also meant he got to play a lot of golf at some of the finest courses in New York and New Jersey, oftentimes with manufacturing “bosses” who he was brokering with.

As a child growing up in the Bronx, Damion Chambers was in awe of his father’s ability to get along with just about anyone, in both his personal and professional life.

“They would have an annual parade for his union and meeting his coworkers and friends and stuff. I can remember as a child that he had a lot of great friendships and connections with the people he worked with,” said Damion, Chambers’ son who now lives in Washington D.C. and works as a private police officer. “I didn’t fully understand what he did, but I could see that his coworkers and people he had contact with enjoyed his company. There was a lot of respect there.”

Damion is Chambers’ second son. His’ oldest, Garland Correll Chambers Jr., tragically died in May after an unexpected blood clot formed in his surgically repaired knee.

Chambers told Damion and Garland Jr. many stories of his work with the unions when they were children, but he also told them about what it was like growing up in Salisbury in the 1940s and 1950s.

“It seemed surreal to us just because it wasn’t our reality,” Damion said. “We were growing up in New York City and he grew up more out in the country in a completely different time period. It was always as if you were reading the book. You’d think the stories were made up.”

Even though Chambers has now lived in New York longer than he has Salisbury, he’s continued to stay connected to his hometown. Since he retired over two decades years ago, he’s spent several months every year living in Salisbury in his aunt’s former house.

“This is my roots, really,” Chambers said.

Chambers spends the rest of the year in his Bronx home with his wife, Cynthia, also a North Carolina to New York transplant.

Several years ago, Chambers opened an art studio in downtown Salisbury in order to have a physical location to sell the countless pictures he’s drawn. Chambers said he’s drawn most of his life, pulling images from his head and putting them down on paper. Now that the studio has closed, pictures cover the walls in his house. Chambers continues to create art, both through his drawings and on his keyboard. A music major at Livingstone, Chambers has always loved the piano as well.

“I’ve never known him not to play the piano,” Damion said. “It’s always something he’s done. As long as I can remember, there’s been piano and art.”

Damion was worried he might never hear his father play again after Chambers was admitted to NewYork-Presbyterian Hospital on April 1, 2020. The lengthy hospital stay, Damion said, was excruciatingly stressful.

“You didn’t have any eyes on the situation,” Damion said. “At that time it was so prevalent everywhere. You couldn’t access the people. You couldn’t go into the hospital to see him. While he was still testing positive, it was locked down … That was the main part of the whole thing that made it really difficult — the not knowing and not being able to communicate with him.”

There were points during the two months, Damion said, when he wasn’t sure if his father was going to come out.

“He was battling a lot of different health issues. That on top of everything, it being at the height of COVID when we were really just hearing about it and seeing the devastating effects of it, made it frightening,” Damion said. “I know everything he’s been through, his age and I just wasn’t sure what was going to be the outcome.”

When Chambers was finally released in early June, Damion was relieved and proud.

“To see him pull through all of these different things, it was a reminder and testimony to his resolve, to his strength as an individual,” Damion said. “It was inspiring.” 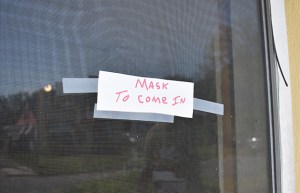 Even though Garland Chambers is fully vaccinated, he has a sign on the door of his Salisbury home reminding guests to stay masked. Spending 71 days in the hospital because of COVID-19 have made Chambers more careful in his daily life. Ben Stansell/Salisbury Post

Nearly a year after he recovered from his bout with COVID, Chambers got his first dose of the vaccine. Although he said he feels relatively safe now that he’s fully vaccinated, he’s taped a sign on the front door of his Salisbury home that reads “Mask to come in.”

Since recovering from the virus, Chambers has only made it out to play golf once or twice. However, he continues to draw and play the piano. He’s always happy to share a story or two with whoever cares to be entertained.