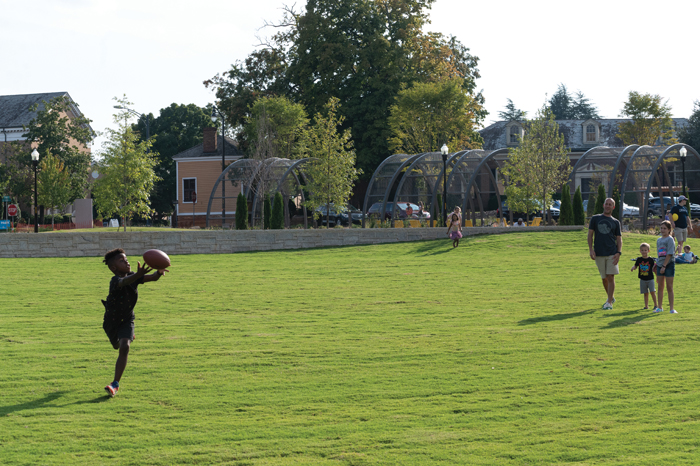 SALISBURY — With Bell Tower Green Park now open to the public, local residents say they’re excited for a new spot for work breaks, lounging and picnics within walking distance of the city’s downtown businesses and restaurants.

The park formally opened Friday after more than two years of construction and four years of private fundraising and planning. The downtown park is bounded by Innes, South Church, West Fisher and South Jackson streets and features a large open grassy area fit for picnics or football games, a 30-by-30-foot stage with a roof, gardens, walkways, a playground, a water wall, splash pad, benches and the historic Bell Tower that was once part of First Presbyterian Church. Eventually, when renovations are complete, the historic Wrenn House will accommodate a tenant.

The park will be open from 7 a.m. to 10 p.m., with bathrooms closing at dusk and hours likely to fluctuate in the future. Currently, there are still features of the park being installed and replaced, the city’s Parks and Recreation department says.

Salisbury resident Heather Harrison said she is excited to visit the park during her lunch breaks at SouthState Bank, and it’s sure to attract even more to the downtown area since it provides a new family-friendly option.

“I think it’s perfect because when they do things like nights out on the town, this would be an added benefit,” Harrison said.

Catawba College sophomores Sarah Preston and Rayne Harris said they welcome the opportunity to “have something that’s fun without costing any money.”

“We already have plans to get friends together and come have a picnic,” Harris said. “I can’t wait.”

Harris said she lives within walking distance of the park and remembers the demolition of the bank and parking lot years ago. She recalled walking to Mean Mug for coffee and trying to find an empty bench nearby to enjoy it while she read. Now she has the perfect spot.

Preston said she’s excited about the stage for future concerts. She also likes the water wall, which reminds her of fountains she’s seen in bigger cities near skyscrapers, she said.

Preston also said she’s impressed with the amount of seating that’s available. The park gives her another excuse to “get off campus” and see more of the area. And instead of making their own sandwiches for the picnic, Harris said friends should instead grab food from Spanky’s and walk to the park to enjoy it.

“Studying here will be nice,” Preston said. “That’s one of the best parts of Salisbury is that they have so many nice local businesses. So I think this will help.”

Spencer resident Miranda Fink said she and her family regularly visit downtown Salisbury, but the park will likely draw them even more frequently. Fink said the park was nice and relaxing, but more shade during the warmer months would be nice.

Salisbury residents Benjamin Neal and Damein Greatheart said they give the park “two thumbs up” and feel it was well worth the investment. The estimated final cost of $13 million mostly comes from private donations via the Bell Tower Green Park nonprofit organization.

Neal said the park’s location is convenient and provides a venue to hold events. And with COVID-19 still limiting some events and outings, the park provides a safe way to get out, he said.

As someone who frequents Go Burrito, Neal said he welcomes the opportunity to “walk it off.”

“There are a lot of locations nearby. You can get something to eat right over there at Go Burrito. You can come out here and have a picnic with your family, friends and loved ones,” Neal said. “After I get finished at Go Burrito, I got some place I can walk my food off.”

Man of many talents, Garland “Mickey” Chambers has lived…