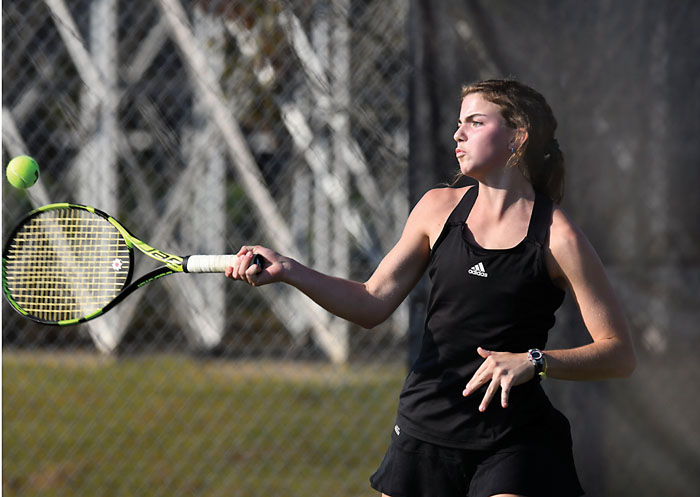 Salisbury's Abby Campion is co-player of the year. File photo by Wayne Hinshaw/For the Salisbury Post

SALISBURY — Salisbury junior Abbey Lawson is sweaty, but beaming, after surviving her match against Ledford’s Abby Dunbar at No. 3 singles.

It’s 6 p.m., and by 6 p.m., the Hornets tennis girls are usually in and out, done with singles and doubles and enjoying cupcakes and liquid refreshment.

The Hornets ultimately win 9-0, as they almost always do, but Ledford is different than most of this season’s opponents. A day earlier, Ledford had wrapped up the championship in its own conference — a 3A conference.

“This could have been a second-round or even a third-round playoff match,” Salisbury head coach Milton Griffith said. “It’s always good for our girls to play Ledford, and that was the case when they were in our league.  You know Ledford is going to bring very good players and very good sportsmanship.”

Lawson got down, rallied to win the second set, and then prevailed in a test of wills in a third-set tiebreaker. She finished strong to earn loud applause from the gallery that had congregated at court No. 3.

Lawson’s match was significant. It was the first time since Aug. 24 she had been seriously tested, and she was pleased to learn she was up to the challenge. On Aug. 24, she lost a third-set tiebreaker against North Davidson, but she learned from it and grew from it.

“That girl I played today, she was very good,” Lawson said between deep breaths. “But I was consistent. That’s why we win. We’re consistent.”

Consistency and patience are the two calling cards of a remarkably steady program that has been pounding area competition and competing at a state level for nearly 50 years now. This year’s CCC championship was the 19th in a row for Salisbury. Since returning to the CCC in 1997, the Hornets have lost three league matches in 25 seasons. Two losses were to Lexington in 2002, but that Hornet team, led by Kristy Woodson and Allison Somers, immediately started another streak that lasted 16 years.

Believe it or not, Salisbury has won 346 of its last 349 conference matches in the South Piedmont, Yadkin Valley and Central Carolina conferences. Yes … 346-3. Not a typo.

That’s both a blessing and a curse for the coaches and girls who go out there and keep that remarkable run going. It takes hours of clinics and camps and practices in season and out of season, but it’s simply assumed by the general population that Salisbury will win in girls tennis. That makes it a bigger deal when the Hornets lose than when they win. When the Hornets fell 6-3 on the road to a very good Oak Grove squad in 2018 to end a 186-match CCC winning streak, four area newspapers contacted the Post wanting to know what in the world happened.

There were all sorts of extenuating circumstances on that September day— the Hornets played without their No. 1 and No. 3 seeds and had four freshmen in the lineup — but it still was a tussle.  Abby Campion was a freshman on that 2018 team, playing No. 4, but she moved up to No. 2 for that scrap with Oak Grove. She lost 13-11 in the third-set tiebreaker.

But it’s what you do after a setback that counts most.  Campion, who is now the team’s senior leader, has been instrumental in the Hornets’ starting their latest streak. When they beat Lexington last Wednesday on Senior Night, it was their 34th straight CCC victory. Those 34 wins, not that one loss, will be Campion’s legacy. She didn’t make excuses. She started a new streak.

“On Senior Night, it was emotional for me because this team is so close and I definitely teared up, but I still didn’t cry,” Campion said. “I think these teams from the last two years — the COVID teams — have been through a lot together and we’ve gotten stronger together. We’ve played two tennis seasons (spring/summer 2021 and fall 2021) basically back-to-back, with maybe a month break in between. But we’ve kept it going. We want to be remembered.”

Salisbury tennis got started with the late Carolyn Murray, who came to Salisbury from A.L. Brown to get a girls tennis program started in 1974.  In 1975 and 1976, Murray’s Hornets went undefeated and won championships in the old Western North Carolina High School Activities Association. She would coach 10 conference champion teams in 16 seasons, as well as individual champions. Francee Eagle and Carol Almond won the WNCHSAA doubles championship in 1975. Eagle and Kathy Harper won it in 1976. Harper and Patricia Tennent made it three straight doubles crowns for the Hornets in 1977.

Murray’s record at Salisbury when she stepped down in the spring of 1989 was 186-22, and the foundation had been laid for a mighty program.

Salisbury rejoined the NCHSAA for the 1977-78 school year. The winning continued.

Salisbury was state runner-up in 1984 (for all classifications) and was crowned as 1A/2A state champion in 1985 with a team led by Susan Saunders and Gwin Carter. Saunders, one of the greats of Salisbury tennis, won three individual state titles in a row (1985-87). Israeli exchange student Fonny Yeor made it four straight individual state titles for the Hornets in 1988.

The Hornets have been members of the Central Carolina Conference since 1997. The coaches — Chris Myers, Scott Maddox and Griffith — have maintained Salisbury’s elite status in the 2A tennis world. From 2006-13, the Hornets won seven of eight 2A team titles. Myers coached the first six, and Maddox guided the Hornets in 2013.

Griffith guided the Hornets to their most recent team state title in 2017 with a group of seniors that included Maria Capito, Julia Honeycutt and Bethany Stauffer.

Last spring, the dual team state championships were eliminated by COVID concerns, but the NCHSAA did conduct individual state championships. Salisbury’s Lillie Rusher and Meredith Burton added their names to the long and distinguished list of Hornets who have finished as state runners-up.

Which brings us to the present. Rusher and Burton were seniors, so their simultaneous departure left massive holes in the program.

So this is actually a rebuilding season for Salisbury.

“Yes, very much so,” Griffith said. “Lillie Rusher and Meredith Burton left huge shoes to fill and Margaret Thurman (who starred as a Salisbury freshman in 2018) is at the Performance Tennis Academy. But we’ve had girls step up for us. Millie (Wymbs) and Abby (Campion) have been excellent at the top two spots. The Frick twins (Emily and Ellison) are very much improved and have done a great job at No. 5 and No.6 singles.”

In the middle are Lawson at No. 3 and Kate Burton, Meredith’s younger sister, at No. 4.

“Every time I turn around, I expect to see Meredith and Lillie,” Kate Burton said with a laugh. “Then I’m like, ‘Oh, that’s right. They graduated.’ It wasn’t long ago that they were playing with us.”

The Fricks are human backboards. They keep it in play until their opponent makes a mistake. That’s usually the key at 5 and 6, where more matches are lost than are won. Minimize mistakes. Stay consistent. They’re good at that.

The Fricks got their feet wet in a few matches last season, but it’s been a thrill for both of them to move into the top six for the first time as seniors.

“We know the really stressful matches are still ahead of us, but I’ve been loving this experience,” Emily Frick said.

“With COVID, I think it’s all been much harder than it normally would be,” Ellison Frick added. “But we’ve all banded together. We’ve gotten through it.”

The Senior Night win against Lexington was Griffith’s 110th with the Salisbury girls and the team celebrated with a formation of cupcakes carefully shaped to spelled out “110.” No. 111 for Griffith, who also coaches Salisbury’s boys team, came 24 hours later against Ledford. Salisbury is 15-0 on the season.

The new version of the CCC isn’t anything like the old one which included stout tennis programs such as Oak Grove, Ledford, North Davidson and Central Davidson. Most of the teams in Salisbury’s new split 1A/2A league, especially the 1A teams, struggle just to put six girls on the courts.

“As much as you try to keep everything normal, it has been very different this year,” Griffith said. “The league we’re in doesn’t challenge us the way our previous league did, so we’ve had to work hard with our drills to keep improving. And I think COVID takes a toll on everyone. Mentally and physically, it wears you down, but the girls have been fantastic.”

COVID has delayed a few bus rides,  but it’s never stopped the Hornets.

“Tennis is normally a big social thing for us, a fun thing that goes way beyond the matches, but we’ve had the priority this year of staying safe and making sure we could have a season,” Kate Burton said. “As far as our matches not being as competitive this year, we’ve still been able to keep a good mindset. Even when we’re playing someone that’s not at our level, the goal is to play your very best that day.”

At 3 through 6, the Hornets might not scare anyone, but those girls can beat you with the twin virtues of consistency and patience.

At 1 and 2, it’s different. Wymbs, a sophomore, and Campion, who plays No. 2 with the aggression and confidence of a No. 1,  have all the shots and they can let it rip with velocity. They can scare you.

“We practice with our guys some and those two have beaten guys,” Griffith said.

Wymbs and Campion advanced to the state quarterfinals last season as a doubles team and enjoyed epic wins as a duo, including one in the CCC tournament championship match against Rusher and Meredith Burton. They’ll be a formidable doubles team again this season.

“We didn’t get the break we normally get between tennis seasons,” Wymbs said. “I didn’t really like that, but I’m very excited about what’s ahead of us.”

The state championship plaques on the Salisbury courts are a constant reminder of those who came before them, and hopefully, those who will come after them, inspired by their example.

“There’s definitely a legacy here, a history, and it’s been really special to be part of it,” Campion said. “To know you played for Salisbury tennis, to have been one of the top six, that means a lot.”

Because of the two-tiered system (individual and dual team), the NCHSAA tennis postseason starts early.

Dual team brackets will be announced on Oct. 18.

The individual qualifying process for the Salisbury girls starts with the CCC Tournament at Lexington on Oct. 11-12.

Thursday’s match with Ledford helped prepare the Hornets for what’s ahead, as will the upcoming one with Central Davidson.  The Hornets are ranked second in 2A behind powerhouse Hendersonville.

As is the case every year, Griffith expects his girls to “seize the moment,” to play their best tennis when it matters most.

No one is more excited than Lawson, who will be competing in individual singles. She was a qualifier for the state tournament last June.

Lawson’s mother (Salisbury High biology teacher Amber Benton Lawson) played tennis for Salisbury, so she’s a second-generation Hornet. There’s a lot of family involved in all of this. Mothers, aunts, sisters, nieces and cousins, with rackets being passed down like an Olympic torch from one generation to the next.

The 346-3 record in conference play probably says it as well as anything. Sports programs such as tennis have crumbled at some city schools, but at Salisbury, the support is still there, the coach and players are still there, and the end isn’t in sight.

“I remember hitting with Maria Capito once and what that meant to me,” Lawson said. “We all understand what playing tennis for Salisbury means.”