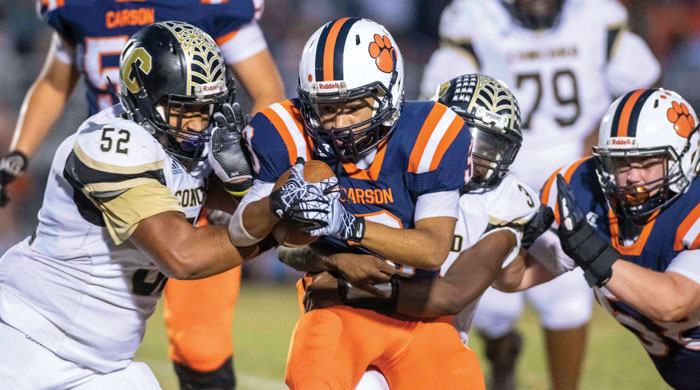 With a chance to alter the conference landscape, the Cougars instead squandered a few of opportunities and suffered a costly loss to visiting Concord.

“We’re not going to panic,” coach Daniel Crosby said after Carson dropped a 27-7 homecoming night decision. “It’s frustrating and we’re disappointed, but at the end of the day we’ve still got to be the best we can be. That doesn’t change based on our record or based on any one-night performance. We talk about one day at a time, one play at a time, one game at a time. You can’t look at where we are in the conference.”

The Cougars (1-4, 0-2) find themselves with more questions than answers after Concord reached the end zone in each quarter and kept the hosts at arm’s length. The Spiders accumulated 290 yards total offense — including 235 on the ground —  and never trailed after marching 65 yards for a touchdown on the game’s first possession. More importantly, they thwarted a pair of fourth-and-1 attempts by Carson and recovered a fourth-quarter fumble after the Cougars advanced to the 9-yard line.

“We faced adversity and responded to it,” winning coach Marty Paxton said after Concord (3-2, 3-0) won its third straight contest and forged a tie atop the SPC standings with West Rowan. “That’s the best thing they did tonight. In the past, when we had issues, we didn’t respond. Right now we’re fighting, facing adversity right in the face and we keep going.”

The Spiders were led by junior Kadin Presutti, an elusive runner who carried 12 times for 115 yards and a pair of touchdowns. Teammate Antonio Jackson gained 92 yards on 16 carries, while quarterback Zack Jenkins ran the offense like he was conducting the Boston Pops.

“We tell him to command the offense,” said Paxton. “Not manage it, command it. It’s his offense and he’s the one that’s gotta run it. It’s his ship and he’s got to be the commander when he’s out there.”

Jenkins completed all three passes he attempted, including a 27-yard strike to Kobe Watts-Williams that opened the scoring midway through the first quarter. In the second, Jenkins orchestrated a 10-play, 68-yard scoring drive capped when Presutti took a handoff and scored standing up from 11 yards out. An unsportsmanlike conduct penalty against Carson fueled the drive and gave Concord a first down on the Cougars’ 25.

“Kind of upsetting,” said Carson linebacker Austin Cook. “Wish we could have found a way, but they were just better overall.”

The Spiders were three touchdowns better after they navigated a short field (51 yards in 8 plays) and went up 20-0 on a 2-yard TD run by Jenkins in the third period. Carson finally got a needed break early in the fourth quarter, when junior Cody Samples recovered a fumble on the Concord 11. One snap later, quarterback Hunter Burris followed left tackle Cole Carmack into the end zone.

“Number Six (soph Trevor Vaughn) stripped it and I jumped on it,” Samples said after making his first varsity fumble recovery. “We made a smart play. Now we’ve got to keep our heads up and keep playing that way.”

Burris, a hard-nosed senior, was Carson’s primary weapon on offense. He rushed for a team-best 86 yards and completed three passes for another 63 — accounting for 149 of Carson’s 200 total yards.

“We’re disappointed, honestly, even though we played our hearts out,” he said. “We were determined not to get shut out. That wasn’t going to happen.”

The Cougars were hoping to be invited back into the conference race, but that was dashed early in the second quarter. Trailing 7-0, they bulldozed to the Concord 27 and faced a fourth-and-1 situation. But instead of plunging straight into the line for a drive-extending first down, Carson was flagged for a false start. On fourth-and-6 from the 32, Burris sailed a pass over Jay Howard’s head.

“I thought we getting a first down there,” Burris said. “It felt like the end of the drive.”

On the Carson sideline, it felt even worse.

“We did that twice tonight — false starts,” said Crosby. “They brought their practice habits to the game. Nobody’s perfect, but we’ve got to try to get better Monday through Thursday to have the result we want on Friday. That sounds coach-speak, but it’s where we’re at.”

It all made for a tough-to-swallow setback, Carson’s fourth in a row.

“We didn’t get dominated tonight,” Crosby concluded. “I told the guys in (the locker room), games like that come down to eight or 10 plays. Either they made 8-10 more plays than we did — or we made 8-10 more mistakes. That’s the difference.”

NOTES: Concord closed the scoring with 5:44 to play when Presutti broke a couple of tackles and scored on an 8-yard scamper. That drive included a bizarre 35-yard running play — Presutti picked up 25 and Watts-Williams the other 10 — that included two fumbles, both recovered by the Spiders. … The Cougars play at Northwest Cabarrus next Friday. … Callie Trexler was named Homecoming Queen and Garrison Collins Homecoming King during a halftime presentation. … A pre-game moment of silence was observed for Carson alumni Cody Adkins, who passed away Thursday evening.