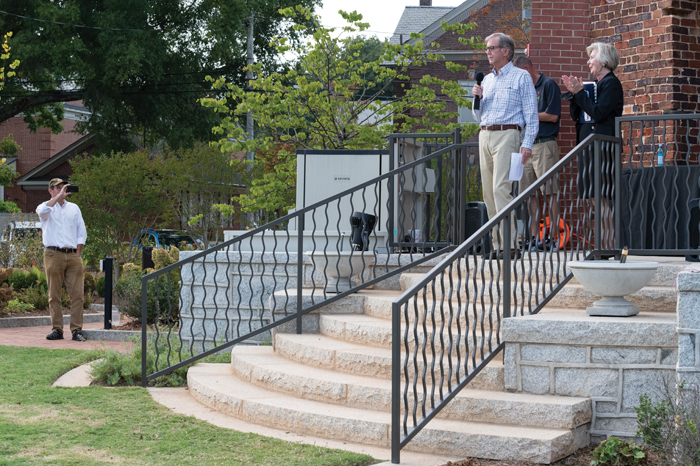 SALISBURY — When Mayor Karen Alexander and Dyke Messinger looked out at the crowd of people in Bell Tower Green Park on Friday, they saw more than a place for people gather.

“This park is the center of all the critical building blocks of a successful, diverse, collaborative city that values the many gifts and talents and treasures given so graciously by our citizens,” Alexander said during a gathering Friday afternoon to celebrate the park’s opening.

Alexander’s speech came after hours of activity in the park. People started flocking to Bell Tower Green shortly after workers removed the first sections of metal fencing. Children ran through the large grassy green in the middle of the park, climbed over a curved wall behind the green, sprinted through the splash pad at the base of the water wall, climbed over playground structures and screamed with excitement.

People brought lunch and dinner to the park to eat with friends and family. They used smartphones to video and take pictures of the park. Bell Tower Green Vice President Jason Walser spent nearly the whole day in the park — watching fencing go down, eating lunch, tossing a football on the green and videoing the afternoon event.

Others were content to sit in the park’s chairs and watch the world go by.

Friday’s activity were symbols of two of the goals the park’s proprietors aimed for when they started the project years ago — to bring some green to a landscape of rooftops and asphalt and create a gathering place. The Blanche & Julian Robertson Family Foundation in 2016 purchased the city block were the park sits in hopes of creating the facility. It exercised an option it held for a year, agreeing to pay the Maxwell Chambers Trust $1.75 million for the block of property bounded by West Innes, South Church, West Fisher and South Jackson streets.

A nonprofit with the same name as the park raised more than $13 million, mostly from private donors, to build the facility. On Aug. 3, 2019, a groundbreaking marked the start of more than two years of construction. Signs in the park note there are still odds and ends unfinished, but it was time to open the park, Walser said.

The park will spur economic development in downtown Salisbury, said Messinger, who serves as president of the nonprofit for Bell Tower Green. Before retiring, he spent nearly four decades at the helm of Salisbury’s Power Curbers.

“People want to gather around parks, where there’s beauty and calm, where they can recreate like everyone’s doing today,” he said. “And this is what this park is also about: this park will be a shot in the arm for economic development in Salisbury.”

Alexander noted projects already planned or started during Bell Tower Green’s construction that aim to bring residential units to downtown, including the Empire Hotel, Bell Block Building at the intersection of South Main and Fisher streets as well as the Salisbury Building on West Council Street.

She called the park “an important and timeless gift” given by community donations that has “already created an economic catalyst for developers far and near to invest in our city to provide economic tax base and jobs for our citizens.”

It’s the best park in central North Carolina and may be the most impressive in the state, Messinger said.

During Friday afternoon’s brief event, Messinger presented Alexander and city government with a ceremonial key to the park. City government will pay for maintenance and hire staff to manage the park.

Commissioners Chairman Greg Edds, who attended Friday’s event, said he’s excited about how the park will help the county and its nine other municipalities.