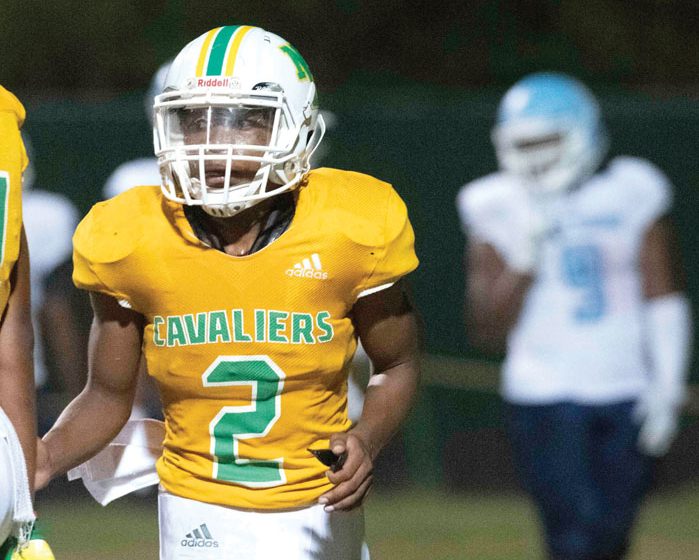 North Rowan’s Jae'mias Morrow took a pitch and scored on first down in the second overtime. FILE PHOTO BY JON C LAKEY / FOR THE SALISBURY POST. 9/10/21, Spencer,NC.

THOMASVILLE — When North Rowan wins on a kick, you know it’s a wild night.

East Davidson (3-3, 1-1) was able to control the ball and took time off the clock with a solid running game.

“They only threw one pass all night, but they were tough and physical,” North head coach Nygel Pearson said. “They’ve got a good team.”

North (4-2, 2-1) got down 8-0 and trailed most of the first half, but finally caught up at 20-all when freshman quarterback Jeremiah Alford scored on a 24-yard run and threw a 2-point conversion pass with 33 seconds left in the half. That put the Cavaliers in a 20-all tie at the break.

“That’s been our M.O.,” Pearson said. “Get one before the half and get it going.”

Alford also figured in North’s first two touchdowns, a 7-yard run and a 63-yard scoring pass to Amari McArthur, who has at least one receiving TD in every game this season.

The game turned into a defensive struggle in the third quarter. Neither team would score in the second half.

“Both teams stalled some on offense,” Pearson said. “We got in the red zone a few times, but we stopped ourselves with penalties. Our defense kept us in it. We asked them at halftime for some stops and they got them. They were getting off the field on third down, something we haven’t been doing.”

East Davidson had the ball first in the overtime and scored, but the Cavaliers stopped the 2-point conversion.

Alford scored his third TD on a scramble for 26-all, but the Golden Eagles stopped a 2-point conversion try.

When Jae’mias Morrow took a pitch from Alford and scored on first down in the second overtime, Pearson  showed a lot of faith in his kicker, and Montes-Medrano delivered the PAT that proved decisive.

East Davidson scored, but the Cavaliers stopped the 2-point conversion and had the victory.

MOUNT ULLA — It was expected to be a competitive game, but West Rowan smashed Northwest Cabarrus 41-6 on homecoming.

The win was the fourth straight for the surging Falcons (4-2, 3-0) and put them in a tie for first place in the South Piedmont Conference with Concord.

Northwest’s strength is its receiving corps, but West DBs were able to cover man-to-man, without help, and the Falcons were able to bring a fierce pass rush.

“We told our DBs they were going to be in some tough spots in man coverage, because Northwest has some freakish athletes,” West head coach Louis Kraft said. “Our guys did the job. Northwest got some yards, but we held a talented team to one touchdown.”

Northwest got off to a brutal start with a muff on the opening kickoff. West got the ball at the Northwest 37, and Noah Loeblein threw the first of his three TD passes to Garrett Fesperman on a fourth-and-23 play.

“Fourth-and-forever and we had four guys running verticals,” Kraft said.   “It turned into a scramble drill, and we’re fortunate to have a senior quarterback who could make a play. He’s got a knack for making something happen in that situation.”

After West’s defense got a quick stop, Loeblein fired a 50-yard touchdown pass to Paxton Greene, and it was 14-0 in a hurry. West never really let up, and the Trojans (3-4, 2-1) never were able to get back in the game after those early punches.

Loeblein was intercepted by Ray Jay Waters to stop West’s next push, but then the Falcons put together a sustained drive. Akin Robinson finished it with a 4-yard run for a 20-0 lead.

“We knew we needed to establish the run, and Robinson and (Cayleb) Brawley really ran the ball hard,” Kraft said. “Our tight end (Ben Sweet) had a great night and our offensive line is getting better every game.”

West took that 20-0 lead to halftime.

“Our defense bent, but it wouldn’t break,” Kraft said. “Every yard Northwest got was a hard-fought yard.”

Loeblein flipped the ball to Adrian Stockton on a jet sweep for the 43-yard touchdown that made it 26-0, and Juan Arteaga kicked the PAT for 27-0.

The Trojans got on the scoreboard in the final minute of the third quarter when QB Alex Walker scrambled 8 yards to score.

West polished off the Trojans with a 63-yard scoring dash by Robinson and a rushing touchdown by Brawley, who totaled 82 rushing yards.

Robinson racked up 163 yards on 14 carries. Loeblein threw for 198 yards on seven completions.

Walker threw for 218 yards for the Trojans. Nzai Coleman ran for 90 yards.

West is scheduled to play a non-conference game at Monroe next week.

SALISBURY — Salisbury wasn’t perfect, turning the ball over twice in the early going, but once the Hornets got rolling they mauled South Davidson 64-0.

It was the fourth shutout for Salisbury’s defense, which scored two touchdowns and a safety. Jaden Gaither returned a fumble for a touchdown. Deuce Walker had an interception return for a touchdown.

Celebrating homecoming, the Hornets (6-0, 3-0) lost a fumble and muffed a punt during a lull in the scoring, but Zae Neal blocked a punt to set up Geter’s scoring run for a 13-0 lead.

Wells’ TD, another Geter to Cook scoring pass, and the safety followed quickly to push the lead to 29-0.

Salisbury finished the half with a 50-0 lead after the defensive scores by Gaither and Deuce Walker.

The second half was played with a running clock. Geter’s third TD pass to Cook and a 60-yard connection with Williams with 1:17 left in the third quarter closed the scoring.

PFAFFTOWN — Kam Hill, one of the state’s top QB prospects, threw for 500 yards on 25 completions as Reagan clobbered Davie 52-14 in a Central Piedmont Conference game.

Reagan led 42-7 at halftime and made it a running-clock game in the second half.

Markel Summers ran for a Davie touchdown with 1:52 left in the game.

CONCORD —  Ty Woods kicked a field goal late in the first quarter to give A.L. Brown a 3-0 lead, but that was the only score for the Wonders in a 16-3 loss at Cox Mill.

The Wonders (3-3, 0-3) have dropped three straight in the South Piedmont Conference.

The Chargers (4-3, 1-2) scored on the ground with two minutes left in the first half to take the lead, went up 9-3 on a third-quarter safety and added a late touchdown.

A.L. Brown’s next game is at home against West Cabarrus.

LANDIS — Central Cabarrus seemed like an ideal homecoming opponent for South Rowan, but the Vikings earned their first win of the season.

South’s defense stood in well against the run, racked up tackles for loss and forced Central (1-4, 1-1) to put the ball in the air, but sophomore QB Kaden Kline got the job done for the visitors. He tossed three touchdown passes and ran for Central’s other touchdown in a 29-12 South Piedmont Conference victory.

On the first play from scrimmage, South’s Trae Rucker burst through a big hole. He’d gained 10 yards when he was hit and fumbled.

South’s defense stopped the Vikings after that early turnover, but when South failed on a faked punt at the South 35, the Raiders gave Central another short field. This time the Vikings scored with Kline finding the end zone from 16 yards out.

Kline flipped a 25-yard touchdown pass to give the Vikings a two-TD cushion at halftime.

When Central took the second-half kickoff and drove to score, the visitors were in control 20-0.

A nice punt by Central pinned South inside its 10-yard line, and the Vikings picked up a safety a few plays later for a 22-0 edge.

Then Central nearly returned South’s free kick for a touchdown. The return went all the way to the South 15. Kline threw his third TD on the next snap to make it 29-0.

Then it was South’s turn for a long return. Gabriel Pozyck found daylight down the home sideline and returned Central’s kickoff to the Vikings’ 8-yard line. But South, which was plagued by penalties, still couldn’t punch it in.

South’s starting quarterback Jamie Klassette was hurt early in the fourth quarter, and Audric Coe provided a spark when he was called on.

Coe threw a 46-yard TD pass to Colton Fisher to put South on the scoreboard.

Coe completed a pass to Noah King to get the Raiders down to the Central 5, and Coe got around the right side to score the TD himself from the 2-yard line.

South’s next game is at Concord, which is tied with West Rowan for first place in the SPC.

Coach: LaMelo Ball must take ‘next step’ for Hornets…