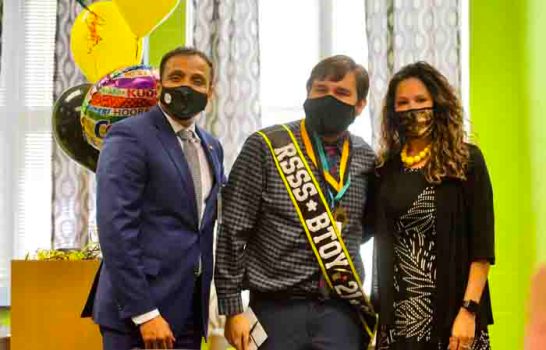 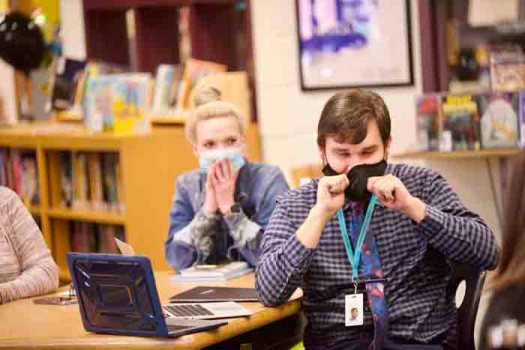 LANDIS – Corriher-Lipe Middle School staff congregated in the media center Thursday for what they were told was a staff meeting, but they really were there to recognize one of their own.

Staff were surprised when Rowan-Salisbury Schools Superintendent Tony Watlington stepped into the room along with other senior administrators and Zachary Lowensten was told he’s the district’s Beginning Teacher of the Year.

A shocked Lowensten was brought up to the front of the room, given a sash and some gifts. His family was tuned in via Zoom call as well.

The sixth and seventh grade math teacher started his career in 2020 when the COVID-19 pandemic was in full swing. Corriher-Lipe Principal April Williamson said Lowensten’s energy is refreshing and told the people gathered he volunteered to give up his planning period to teach more students.

Lowensten said his first year was challenging because of the pandemic, but he enjoyed every moment of it. One of the ways he connects with kids is through Rubik’s Cubes. He has an entire shelf full of the puzzles in his classroom and said they show the kids something that seems so difficult at first and can be solved if they put in the time and effort.

“Also, they never realize they’re doing math along the way, which is a nice little bonus,” Lowensten said.

Lowensten graduated from the State University of New York New Paltz, and came to North Carolina to be closer to his family. His academic adviser knew Jennifer Lentz, principal at Southeast Middle School. He was originally hired to teach there, but  transferred a week before classes began last year.

He said it was devastating at first because he felt like he would fit in at Southeast, but he looks back on it as a great decision for him.

“I love everyone I work with,” Lowensten said.

Lowensten said he is in the profession to make the world a better place and help kids when they are more isolated than ever.

“A lot of kids don’t have a lot of guidance,” Lowensten said, adding he hopes his students will go on to guide the generations that come after them as well.

Williamson said Lowensten is one of the best teachers she has seen in her 22 years in education. She said he always puts students first and forms great relationships with them.

“He loves what he does,” Williamson said.

Nikisha Leak, site support leader at Corriher-Lipe, supports teachers in their first three years. She said Lowensten always goes above and beyond and has a connection with his students.

Williamson nominated Lowensten for the award and said she was not surprised he was recognized this year, adding the support Leak gives the school’s new teachers is phenomenal.

“We mold them and help them grow,” Williamson said.

This is the third year the district has recognized an early career teacher with the award and the second year a Corriher-Lipe teacher has received the award. Last year’s winner was China Grove Middle School Teacher Makenna Pate.