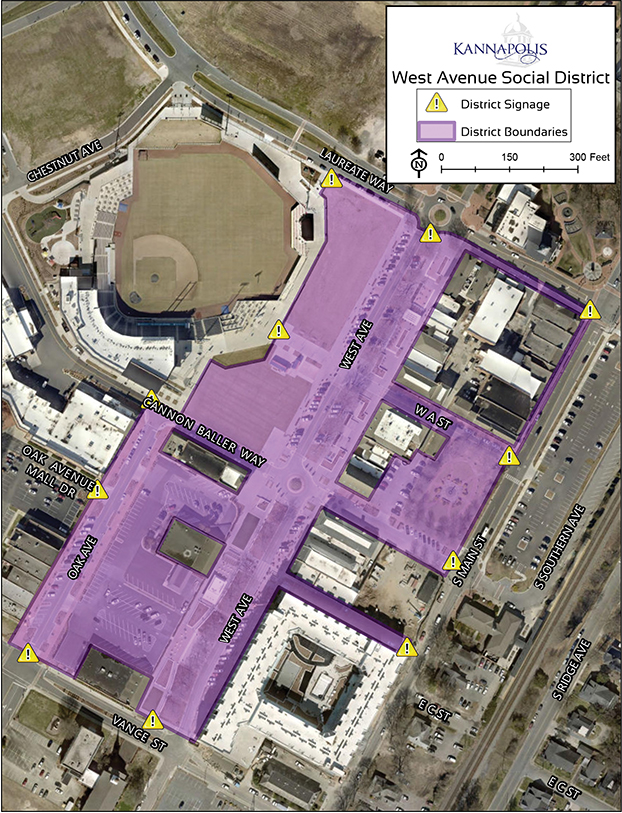 The boundaries of the new social district in downtown Kannapolis, which allows people to drink alcoholic beverages on the sidewalks and gathering places.

KANNAPOLIS — Starting this weekend, people who purchase alcoholic drink from a licensed establishment in downtown Kannapolis can sip it while strolling down the West Avenue streetscape.

The City Council this week designated a “social district” in downtown Kannapolis, taking advantage of legislation passed by the North Carolina General Assembly and signed into law this month by Gov. Roy Cooper.

The district will enable patrons who buy an alcoholic drink at Chophouse 101, Sabor Latin Street Grill, Old Armor Beer Company or any other ABC permitted business to take the drink outside of the restaurant and enjoy it on the sidewalks or public areas inside the district’s bounds.

“We built downtown with the large sidewalks and the plazas and all the people places, the gathering places downtown,” City Manager Mike Legg said. “This gives people an opportunity to take advantage of those places like they couldn’t before. Previously, you could buy a beer at Old Armor for instance and you couldn’t walk across the street where you have a big plaza and outdoor seating and all of that there. This allows some of that to occur and for more gathering places to happen. From that perspective we think it’s good.”

Kannapolis is among the first cities in North Carolina to implement a social district.

“We’ve been following this for some time. In fact, we considered asking for some special legislation before it appeared the state assembly was going to do this statewide,” Legg said. “This kind of thing was always on our radar screen. When we saw it was passing, we did start to get ready for it but we honestly weren’t able to do a lot until we saw what the final legislation was.”

Kyle Lingafelt, co-owner of Old Armor Beer Company, remembers discussing the concept of a social district with city officials when his brewery first opened about two years ago.

“This has been a conversation piece since 2019,” Lingafelt said. “When the state passed it, we were on board and ready to go.”

Lingafelt said the city had a small taste of what a social district might look like when Old Armor hosted its St. Patrick’s Day celebration earlier this year. The pub crawl style event allowed patrons to enjoy the brewery’s beers outside of its physical confines.

“We had business owners asking if we could do it again every weekend,” Lingafelt said. “It made it a fun environment and brought in people from everywhere. We had people coming from Charlotte. We did it well and we did it right.”

Carlos Hernandez, owner of Chophouse 101, said he expects the new social district to give downtown businesses a boost.

The social district will benefit the breweries and restaurants selling booze, but Lingafelt said it will give a buzz to every downtown business.

“We’re for it, but the stores are more for it because it’s going to bring more people to downtown,” Lingafelt said.

Since Kannapolis is on the cutting edge of the new North Carolina law, Legg admits that the city will be somewhat of a test case and anticipates there being some adaptations along the way.

“We’ll be partners with ABC officials and the (Alcohol Law Enforcement) division and we’ll make improvements over time if we need to make improvements,” Legg said. “That’s sort of the game plan. It’ll be a work in progress to some degree.”

The city has a number of rules for the district already in place:

• ABC permitted establishments must ensure they meet all legal requirements for carding and limiting consumption of alcoholic beverages. The establishment can only serve two beers/wine drinks or one liquor drink to one patron at a time.

• Drinks must be purchased and consumed within the boundaries of the West Avenue District.

• Anyone with a drink in the designated West Avenue District must throw away the drink before leaving the district.

• Drinks must be in specially labeled cups which will be sold by establishments in the West Avenue District. They must be less than 16 ounces.

• Drinks will only be allowed in the district from 10 a.m. to midnight Monday thru Saturday and noon to midnight on Sundays.

• Once the patron leaves the establishment with the drink container, the patron cannot enter any other building downtown or a vehicle without discarding the drink.

• Kannapolis Police officers will enforce the restrictions of the West Avenue District.

The city says those regulations will help the downtown area continue to be a destination for families to gather.

“We still want to stress that this in no way changes anything about the safety of downtown,” Legg said. “It’s still a family friendly environment. We think that this will probably be pretty much unnoticeable to the general public, but those patrons for specific businesses will be able to take advantage.”

While the Kannapolis Police Department will be responsible for enforcing the social district’s rules, businesses will chip in as well.

“We’ve got to make sure that one bad apple doesn’t ruin it for the rest of us,” Lingafelt said.

The social district will be in place just in time for Old Armor’s Oktoberfest celebration, which starts at 11 a.m. today.