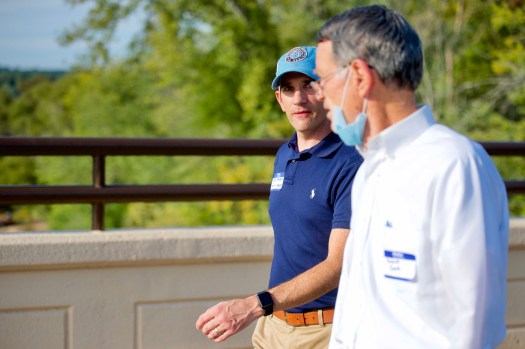 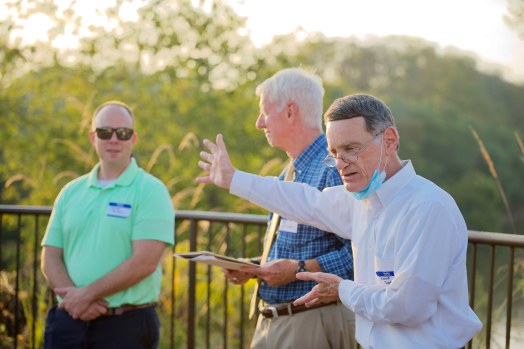 SPENCER – Davidson County paired a hot afternoon with ice cream and history on Thursday to make some connections on the progress surrounding the Wil-Cox Bridge.

Davidson County government officials brought together supporters of the park to talk about the work being done there. In attendance were representatives from the town of Spencer, Davidson County staff and county commissioners, as well as others interested or involved in the project.

The event started with tours of the Davidson County facilities and presentations on the history of the area near the bridge dating back to the Colonial period, from battles to trade routes. The tours wrapped up with dessert from Salisbury ice cream truck company Mr. Cone.

Ronnie Smith, who represents the Rowan County charitable organization Friends of Rowan, corralled everyone to the viewing area by the bridge for announcements. Yadkin River Park Committee Chair Paul Mitchell said the event was to recognize what has been done to make the continual development of the park a reality.

Davidson County’s state representatives, Larry Potts and Sam Watford, were among the attendees who voiced their support for the project.

Mitchell called Smith up to give some perspective on what is happening with the Rowan County side. Smith, in turn, called up every official from Spencer that he could see in the crowd.

“We are so proud to be a part of this project,” Smith said. “When I say we, I’m talking about Spencer and Rowan County, and together our dream is coming true.”

Smith handed off to Spencer Mayor Jonathan Williams, who walked the crowd through the town’s vision for the Rowan County side of the river. He said what Davidson County has done on its side has gotten the other kicked into gear.

“Early spring time, we are actually going to start developing the Yadkin River Trailhead on the Rowan County side,” Williams said, adding his thanks to Smith, Friends of Rowan and others who have contributed.

Smith said the town’s vision goes beyond the park, with the hope to develop a greenway stretching through Spencer to Grants Creek.

Williams said that project combined with doubling the size of Stanback Educational Forest opens up the opportunity to connect to Salisbury and create 12.5 miles of continuous greenway in Rowan County, which doesn’t count development on the Davidson side.

“Just think about the amazing recreational amenity that that’s going to provide not only for Rowan and Davidson County citizens, but for folks across North Carolina and beyond,” Williams said.

Williams told the Post the value of meetings like Thursday’s is partnership and collaboration with people in Davidson County.

“We’re looking to connect Yadkin River Park with the Yadkin River Trailhead on the Spencer side,” Williams said, adding one of the first things he did when he was elected was to get involved with the project via Spencer projects planner Joe Morris.

Williams said the town’s goal is to complement the Davidson park, not duplicate it. The town is awaiting the results of grant applications,  but has cash on hand to develop the first two of three phases of the trailhead,  which would include building trails and installing amenities like benches and parking on the Rowan side.