College football previews: No. 24 Wake looking to go 5-0 as Louisville comes to town 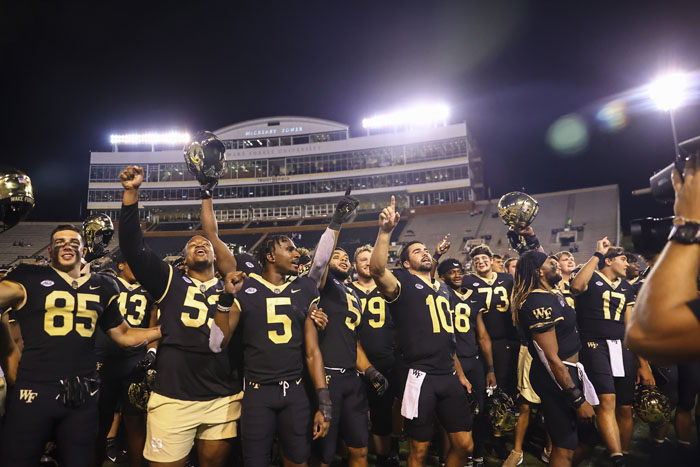 Photo courtesy of Wake Forest University — The Demon Deacons will be trying to improve to 5-0 Saturday.

Wake Forest is again off to a fast start under coach Dave Clawson and has the best record in the Atlantic Coast Conference.

He wants the 24th-ranked Demon Deacons to keep building off of that, too, something Wake Forest has been unable to do in past years. The Demon Deacons enter Saturday’s game against visiting Louisville as the league’s only team with multiple conference wins.

“We’ve been here before,” Clawson said. “We’ve been 4-0 four out of the last six years. How do you want to finish? I believe this team is capable of finishing stronger than the ’16, ’17 or ’19 team. But you have to prove it week to week on the field.”

The Demon Deacons (4-0, 2-0 ACC) have won every game by at least 20 points, including at home against winless Florida State and on the road against Virginia to start the league schedule. They’ve reached a point that has tripped them up in those past 4-0 starts under Clawson.

To his point, the 2016 and 2017 teams each lost their fifth game. The 2019 team pushed to 5-0 before losing 62-59 to the Cardinals, who led 28-7 by early in the second quarter on Wake Forest’s home field. And none of those three finished with more than eight wins.

The Cardinals (3-1, 1-0) haven’t lost since falling to Mississippi in the season opener. They rolled to a 31-7 first-half lead against Florida State before holding on to win, getting a late turnover to seal it for the second straight game.

Coach Scott Satterfield noted that they’ll have to come up even bigger at Wake Forest. The Demon Deacons’ offense is clicking, and he doesn’t want a repeat of the 2019 shootout.

“You have to be fundamentally sound,” he said, “you have to have an understanding what they’re trying to do offensively because they do a lot of different things with the gaps game, zone read or they’ll run (Sam) Hartman a little bit.

“Then all of a sudden he’ll pull the ball, he’ll throw the ball on all these routes and they’ve got some excellent receivers.”

Some other things to know about Saturday’s Louisville-Wake Forest matchup:

Louisville has won five of seven since joining the ACC for the 2014 season, scoring 107 points in the past two wins. Last year’s meeting came in December as the Demon Deacons returned from a nearly monthlong pause due to COVID-19 concerns.

The Demon Deacons spent five weeks in the Top 25 during the 2019 season, cracking the poll for the only other time during Clawson’s eight-year tenure before jumping in Sunday.

“That wasn’t our goal to get ranked,” offensive lineman Michael Jurgens said. “We’ve got bigger goals than that.”

Scott Satterfield announced this week that wide receiver/kick returner Braden Smith sustained a season-ending knee injury in the Florida State victory, leaving the Cardinals without one of quarterback Malik Cunningham’s regular options. The sophomore had caught 11 passes for 68 yards and a touchdown and threw a 45-yard TD against UCF.

Smith’s injury followed last week’s pregame announcement that starting linebacker Monty Montgomery would miss the rest of the season after injuring his knee against UCF.

Ford leads the Cardinals with 19 receptions for 208 yards and a TD. The 6-foot-2, 240-pound sophomore is among six receivers with at least one score and leads four with at least 10 catches. Perry has blossomed this year with team highs of 17 catches for 292 yards and three touchdowns, including 155 yards in the FSU win.

The Cardinals recorded a season-high six sacks at FSU, more than the previous three games combined and their highest total since posting seven against Wake Forest in 2016. Their 11 sacks are tied for 41st in FBS, significant for a squad that totaled just 21 last season.

“Ole Miss was like a life lesson because we played a high-tempo team,” said linebacker Yasir Abdullah, who had two sacks against FSU and four this season. “We have to just do our job and be disciplined.”

No. 23 NC State focuses on Louisiana Tech after big victory

Next up is Saturday’s visit from Louisiana Tech in the Wolfpack’s final nonconference game before diving into the rest of the Atlantic Coast Conference schedule. It comes a week after the Wolfpack earned the program’s first win against six-time reigning ACC champion Clemson since 2011.

“Our goal wasn’t to beat Clemson,” Doeren said. “Our goal was to win every game we play this year, and to be in contention to win this league. So all we’ve done is to move closer to the goal. …. We’ve all seen enough football to know that there’s a lot of teams out there that don’t handle winning very well, and we’re not going to be one of them.”

The double-overtime win against the Tigers  pushed the Wolfpack (3-1) into the AP Top 25 as the ACC’s highest-ranked team in a wide-open year, anchored by a defense that ranks among the best in the Bowl Subdivision.

Receiver Emeka Emezie said the Wolfpack did a good job moving on from an early loss at Mississippi State, so it should be ready for this challenge.

“That’s how you can tell we have a mature team, because we bounced back,” Emezie said.

Louisiana Tech (2-2) also lost at Mississippi State this year, blowing a 20-point lead early in the fourth quarter of a 35-34 season-opening loss. Now the Bulldogs from Conference USA will get a second shot at beating a power-conference opponent on the road.

“We want to win these games. There’s not a moral victory just in being close,” Bulldogs coach Skip Holtz said. “But I also think we realize nonconference-wise with the teams we’re playing, we’ve got to be playing at a really high level to do what we want to do and accomplish what we want.”

Some other things to know about Saturday’s game:

N.C. State is missing three defensive starters due to season-ending injuries in all-ACC linebacker Payton Wilson, safety Cyrus Fagan and nose tackle C.J. Clark – who was on the sideline on crutches with his left knee in a brace during the Clemson game.

But the Wolfpack held Clemson to 214 total yards. That’s part of a defensive showing this year that has N.C. State sixth in the FBS ranks in scoring defense (13 points per game) and seventh in total defense (249.2 yards).

Holtz said he isn’t sure about whether the Bulldogs will have quarterback Austin Kendall, who missed last week’s win against North Texas with what the school described only as “medical reasons.”

Kendall, who played previously at Oklahoma and West Virginia, threw for 351 yards and four touchdowns in a loss at SMU on Sept. 18. He also ran for a touchdown in each of the first three games.

Sophomore Aaron Allen is listed at No. 2 on the depth chart for the game.

N.C. State would love to get another big game from Emezie and fellow receiver Devin Carter.

Emezie, a senior, had career highs of 14 catches for 116 yards and a touchdown against Clemson. Carter, a redshirt sophomore, had two TD catches in that game – the second being the winning double-OT score on a back-shoulder throw while staying inbounds in the end zone.

North Carolina’s potential-filled season has turned into one of frustration. The Tar Heels’ next chance to correct that wrong course comes Saturday in a visit from longtime nearby rival Duke.

They started the season with a top-10 ranking for the first time in nearly a quarter-century and as the favorite to win the Atlantic Coast Conference’s Coastal Division race. An opening-night loss at Virginia Tech drained some buzz but was passed off as a learning experience for a team still shoring up replacements for departed NFL talent.

A second ugly road loss, this one at Georgia Tech last weekend, has left Mack Brown’s coaching staff to sort out bigger concerns for the now-unranked Tar Heels (2-2, 1-2 ACC).

“Let’s quit worrying about last year’s offense, and let’s figure about this year’s offense,” Brown said. “Let’s get better on defense. We’re more talented than to be middle of the league on defense and not getting turnovers. So let’s grow up and let’s pull together, and let’s play together.

The Blue Devils (3-1) had their own opening-night stumble at Charlotte but have won three straight since, including against Northwestern and Kansas. They’ve been powered by running back Mataeo Durant’s now-routine big performances, though the offense overall has been one of the Bowl Subdivision’s best in quarterback Gunnar Holmberg’s first year as the starter.

“We’re playing an extremely talented team, the most talented team that we’ve seen to this point – probably in a big way,” Blue Devils coach David Cutcliffe said. “So if you’re not sound in every aspect, if you’re not doing the little things well, they will exploit it with that kind of talent.”

Some other things to know about Saturday’s Duke-UNC game:

Durant has been terrific from the season’s first snaps. The senior ran for a program-record 255 yards in the Charlotte loss and also had 100-yard efforts against the Wildcats and the Jayhawks. He ranks third in the FBS ranks by averaging 130.5 yards rushing and is tied with Fresno State’s Jalen Cropper second in total touchdowns with nine, one behind Marshall’s Rasheen Ali.

“I think he’s a really complete football player,” UNC defensive coordinator Jay Bateman said. “He catches it, blocks, he’s a very physical runner. … I think when he gets his shoulders square, he’s a very hard guy to tackle.”

Expect plenty of yards and points in this one. Duke is ranked eighth in the FBS in total offense (544.5 yards per game) and tied for 20th in scoring (38.8 points).

“This offseason, especially during camp, we’ve preached just being explosive,” Blue Devils receiver Jake Bobo said. “Being constantly explosive, and that’s definitely something I think we’ve done so far through the first four.”

Charlotte on road as Illini look for first
win since August

CHAMPAIGN, Ill. — Illinois has not won a game since August and hosts a surging Charlotte team Saturday that is eager to knock off a Big Ten opponent.

Illinois’ last victory was the 30-22 season-opening win over Nebraska on Aug. 28. The Illini (1-4, 1-2 Big Ten) have lost all four games since. Three of those were games where Illinois was either tied or down by less than one score with the ball in the final minute.

First-year coach Bret Bielema said his team is working on closing out tight games. “Everybody wants to concentrate on why we lost, and believe me I’m diving into that knee deep and going through it. But I want you to understand that it’s actually a step in the right direction to be disappointed that we finished close,” he said. “We’ve got to get ourselves back on track.”

The 49ers’ dynamic receiving duo of Victor Tucker and Grant DuBose have each recorded two 100-yard performances through the first four weeks of the season, against Middle Tennessee and Duke.

Third-year 49ers coach Will Healy has been impressed with Tucker’s performance so far. “I’ve seen tremendous growth in Vic,” Healy said. “I think now he’s a great player and an outstanding leader.”

Reynolds broke the school record for career passing touchdowns in the 41-38 win over Middle Tennessee, passing for 339 yards and four touchdown passes. He has 45 career touchdown passes for a program that only joined the Bowl Subdivision in 2015.

“Reynolds is a very talented, accurate thrower,” Bielema said. “He’s got a lot of skill around him both at the running back and wide receiver position.”

Illinois is tied for the Big Ten lead in takeaways with nine.