High school football: Wilson making the most of the experience with Hornets 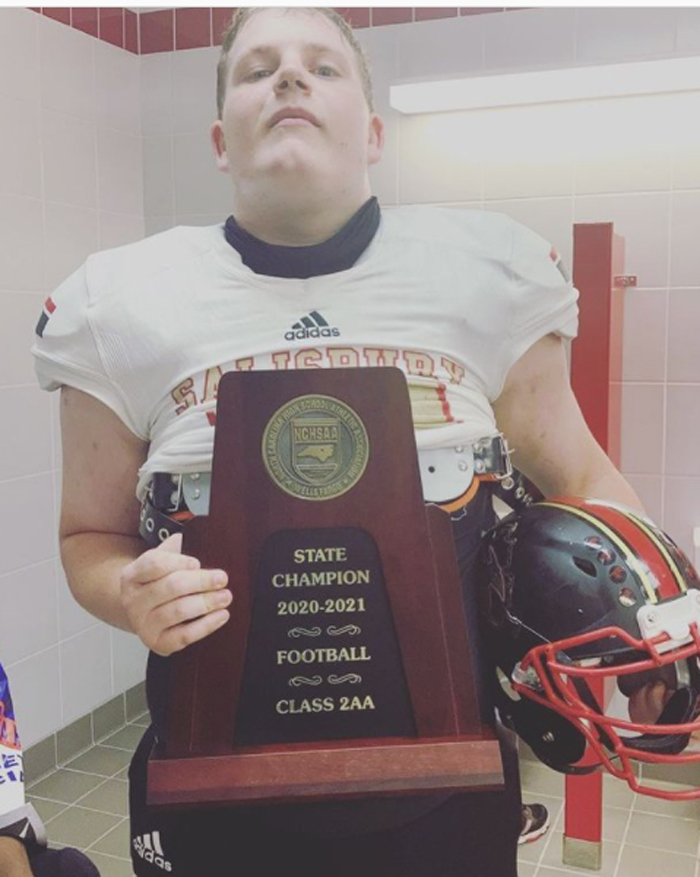 SALISBURY — Chandler Wilson is a backup nose guard for the Salisbury Hornets, but the senior attacks each day like a superstar.

Wilson stays busy soaking up memories from being a teammate of players such as Georgia recruit Jalon Walker, electrifying sophomore quarterback Mike Geter and junior steamroller JyMikaah Wells, who tied the school record in Friday’s 69-6 rout of West Davidson with five rushing touchdowns.

“No one enjoys being a high school football player more than Chandler Wilson,” Salisbury head coach Brian Hinson said. “You really want the kids to enjoy this experience and create those lifetime memories, and he’s enjoying high school football as much as anyone I’ve ever coached.”

Wilson is big. He claims 6-foot-2, 260 pounds, although he looks taller and larger than that up close. He didn’t play football as a freshman or sophomore, so he’s had some serious catching up to do. He debuted on the roster as a junior and got to be a small part of the run to the 2AA state championship last spring.

“He doesn’t play a lot, but that doesn’t stop him from working his tail off in practice every day,” Hinson said. “There’s been a time in our games when we’ve been able to get our backups in and let everyone play some. Chandler made his first career tackle in the South Rowan game, and that tackle was the talk of the coaches’ meeting that Sunday. Everyone was excited for him.”

Wilson realizes that his role is usually going to be as an extra-large cheerleader. He’s going to be doing more encouraging than tackling.

“When the offense comes off the field, I congratulate them, and when the defense goes on the field I try to get them pumped up,” Wilson said. “I try to stay hyped and positive all the time.”

There weren’t any negatives on Friday. West Davidson moved a handful of yards for a touchdown after Salisbury didn’t execute on a punt snap, but otherwise it was smooth sailing. As usual, the Hornets (5-0) did whatever they wanted on both sides of the ball. Their scores so far have been 44-0, 65-0, 53-0, 49-21 and 69-6. Thomasville, 4-1 and ranked third in 1A West by MaxPreps, was the victim in the 49-21 game, and it was nowhere near as close as it sounds.

“We did our jobs against West Davidson,” Wilson said. “It was a very good game for us on offense and defense. West Davidson played very hard. We were just better.”

Wilson does the extra, the little things that coaches really appreciate.

“When you need someone for the chain crew for a jayvee game, he’s always the first one to volunteer,” Hinson said.

Wilson said Hinson has made a major impact on his life.

“Having a chance to wear a helmet with that Salisbury logo and just getting to know the guys on this team and being friends with them, I’m thankful for all of it,” Wilson said.

Wilson hopes to attend a junior college after graduation. He’s skilled with his hands and is planning on becoming a welder or electrician.

“He’s one of those guys that after he graduates he’ll be coming back to watch every Salisbury game,” Hinson said.  “He’s what high school football is all about.”