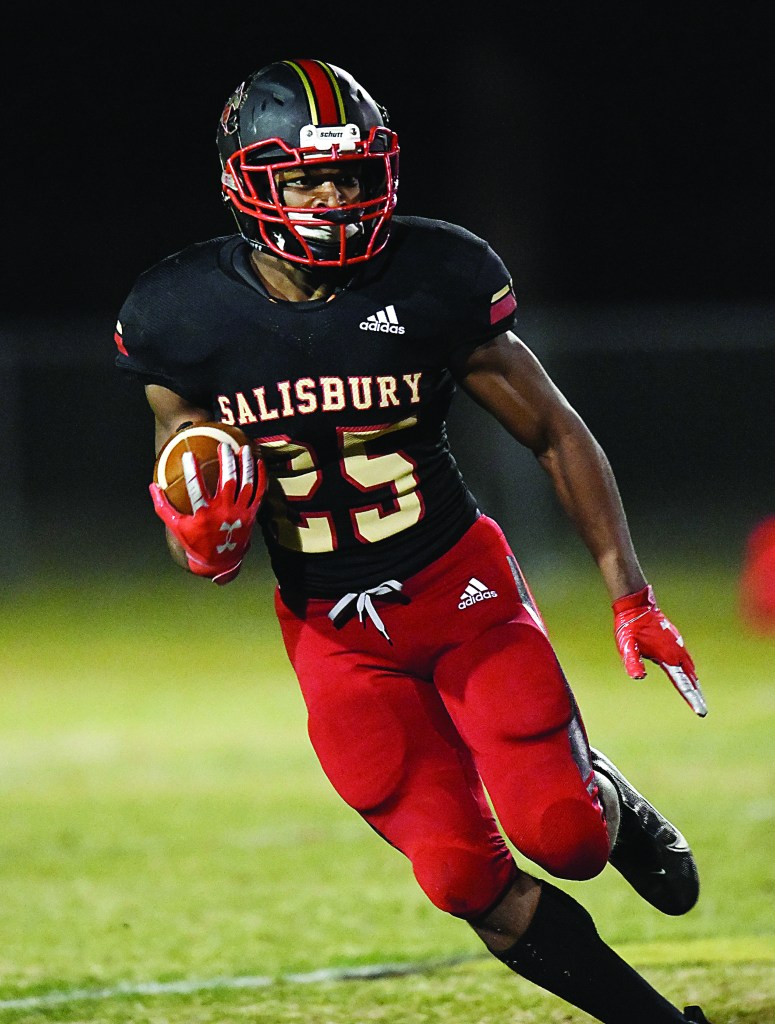 West Rowan has played the county’s most entertaining schedule to this point.

Even non-conference games with 4A neighbors Davie and Mooresville were reasonably high-profile, with Davie boasting one of the state’s most prolific offenses and with Mooresville being led by ex-Falcon head coach Joe Nixon.

Which brings us to a new week, and, you guessed it … the Falcons are in the marquee matchup.

Why is a West Rowan home game with Northwest Cabarrus, a program West has pounded like a set of bongos throughout this century, considered “marquee”?

Well, West and Northwest are two of the three South Piedmont Conference teams that have 2-0 league records, so this is a game that could decide the conference championship.

This is the WSAT radio game of the week for Rowan and Cabarrus, but it’s not like these are juggernaut teams. West started out 0-2, while Northwest started out 0-3. They both own three-game winning streaks at the moment, but they are works in progress.

West is ranked a modest 102nd in the state by MaxPreps, while Northwest Cabarrus is No. 188.  Still, they are the SPC’s two most highly regarded teams. No one else is in the top 200.

It’s no secret that West’s three victories have all come against Rowan schools. Carson and South have combined to go 2-8, and the Falcons barely escaped from North in Spencer.

So the jury is still out.  An army of doubters is still marching around.

It’s not like old times in Mount Ulla — not yet, anyway — but it will be fun to see what happens next.

After an open week, Carson returns to action at home against Concord. It’s a must-win if the Cougars are going to be a factor in the SPC race.

South Rowan is home against Central Cabarrus. MaxPreps actually ranks South higher than winless Central, but South got banged up against West Rowan, so the Vikings probably should be slight favorites.

North Rowan goes to East Davidson. The Cavaliers usually rule this matchup, they are ranked considerably higher, and they probably can outscore the Golden Eagles. Still, North allowed 59 points last week, so you can’t say this is a sure thing. Both teams are 3-2.

Salisbury is home against a South Davidson team that lost 57-0 to North Rowan, so this figures to be about as one-sided as it gets. Salisbury’s offensive guys aren’t going to get tackled very often, and the defense and special teams might get a few scores.

It’s strange to see A.L. Brown standing 0-2 in conference play. The Wonders probably are already out of the conference race, as it doesn’t appear anyone in this league can deal with Hickory Ridge. The Wonders will seek their first Greater Metro Conference victory at Cox Mill.

For Davie, coming off an overwhelming home loss to East Forsyth, it doesn’t get any easier. There’s no rest in the Central Piedmont Conference. Friday’s opponent, Reagan, beat East Forsyth.

East Rowan gets a week off to regroup after a 33-7 loss to Northwest Cabarrus and is scheduled to return to action at Central Cabarrus on Oct. 8.

All games are at 7 p.m. unless otherwise noted.

Surprisingly, these programs have never met on a football field.

Surprising because as the crow flies, South Davidson is only about 20 miles from Salisbury. Of course, you can only get from one school to the other after some serious twists and turns. It’s about 35 miles by car and at least 40 minutes.

Bottom line: Salisbury should win by whatever it wants to win by.

The Wildcats don’t have any way to deal with Salisbury players such as Marcus Cook, who is now the program’s all-time leader in receptions (67) and receiving yards (1,116). Cook is averaging almost 35 yards per catch. Quarterback Mike Geter has accounted for 20 touchdowns despite sitting down early in the blowouts.

“On film, South Davidson looks better than West Davidson,” Salisbury head coach Brian Hinson said. “They do some things on defense that can give you fits.”

Because of the strength of schedule factor, Salisbury won by 62 points last week and still dropped from second to fourth in the 2A West MaxPreps rankings.

The Hornets aren’t going to be tested often on Fridays, so they’ll have to keep pushing each other in practice.

The concerns for the Cavaliers are on defense and on special teams, where they gave up two scores in last week’s lopsided loss to Thomasville.

East Davidson beat Trinity and Wheatmore, two schools with winning records, and the Golden Eagles also took care of Lexington. But the losses have been ugly — 38-0 to Ledford and 42-0 to Providence Grove.

North Rowan won the four games the programs played from 2013-16 and leads the all-time series 16-4.

The last win for the Golden Eagles in the series came in 2008 when they shut down North for a 10-6 victory and won the Central Carolina Conference championship.

Potentially, this will be the fastest game ever played.  Both are option teams and both would be happy to run the ball on every snap.

Concord runs it quite well and pounded East Rowan into mulch with 450 rushing yards.

Still, not everyone is sold on Concord. The Spiders are 2-0, but the two league wins came against winless teams, including a 22-20 squeaker against Central Cabarrus.

Carson has had two weeks to get ready for it and has a shot at the upset, but the Cougars never have beaten the Spiders. Carson is 0-5 all-time in the series. The most recent loss to Concord was 35-8 in 2016. Concord won the biggest matchup of the schools when it beat Carson in a 2010 playoff game.

The jayvee game was postponed due to COVID protocols, but the varsity game is still on.

It’s a home game South can win, but there were a lot of injuries in last week’s loss to West Rowan, with leading rusher Landon Richards and leading receiver Bronson Hunt among those who were hurt. If they’re out, that seriously limits the weapons for QB Jamie Klassette, although Trae Rucker scored two TDs last week.

Zach Bevilacqua, a former West Rowan assistant, is the head coach for Central.

This series has undergone quite a spin.

South Rowan won the first 10 meetings, with eight of those coming from 1977-84, glory days for Raider football.  South’s most recent victory was in 2010.

Both teams still have their share of skeptics. Both teams would like to make a statement Friday night that they’re the favorite in the conference.

Northwest has excellent athletes at receiver (Tevin Tucker, Tru Sierra) and pass defense is an area where West still has some questions.

Northwest’s sophomore QB Alex Walker had an amazing first quarter last week against East Rowan and has thrown for 13 touchdowns.

“He reminds me a lot of our guy (Noah Loeblein) when he was a sophomore,” West coach Louis Kraft said. “Northwest has some good things to look forward to.”

West hopes to keep those good things in the future and not the present.

In the biggest matchup, West won a late-season battle of undefeated teams with Northwest in Mount Ulla in 2005. That game might still hold some regular-season attendance records.

The Wonders have won seven of eight in the series, including an overtime decision back in the spring.

The Chargers tasted their lone victory in 2018.

Both teams are desperate for a league win. The Wonders lost to Hickory Ridge (badly) and Lake Norman (painfully). Cox Mill lost to Mooresville and West Cabarrus.

The Wonders, ranked 72nd in the state by MaxPreps, are favored over the No.89 Chargers.

As good as Davie is (27th in the state), the War Eagles are ranked just fifth by MaxPreps when it comes to the eight-team Central Piedmont Conference.

What we do know is the CPC is serious business almost every week. Reagan is ranked 23rd in the state.

Davie got clobbered by East Forsyth last week, which seems to happen every year.  Reagan beat East Forsyth, but Davie still should be fine in this game.

Davie puts up massive points against Reagan. In the last two meetings, Davie has outscored Reagan in track meets — 49-42 and 49-40.